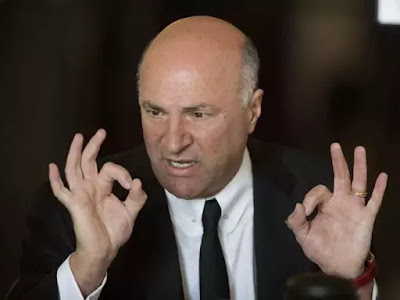 My best Ottawa Tory buddy is miffed. He's pissed off with Kevin O'Leary and, by the sound of his complaint, he's probably not alone.

It seems my pal, and other reliable Tory donors, got hit up by K O'L for a campaign contribution just four hours before O'Leary announced his withdrawal from the leadership race which also happened some 10 hours after the Bad Boy from Boston had made his decision to pull the pin.

There may be a lot of Tories calling Visa, or American Express, or their banks this morning to try to stop payments to Old Baldy.
Posted by The Mound of Sound at 11:00 AM

Kind of like the way O'Leary runs businesses. He talks a good show, takes what he can and leaves everyone hanging. I would think people would be leery of O'Leary by now.


Ah, you see, UU4077, you're still resisting the "post-fact" world. Trump was elected despite everything in his sordid past - the bankruptcies, the philandering, serial sexual assault, the little people he cheated. I don't think O'Leary holds a candle to his American Idol and Trump stands as an example to others of their ilk.

Your friend must recognize that credo and have at least a little respect for it.