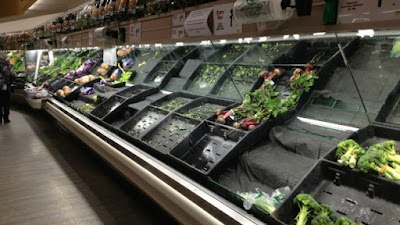 Even in Canada, California supplies a good bit of our fruits and vegetables, especially in the off season.

We feared for supply - and cost - while California farmers endured six years of severe drought. You may have heard that California's drought has recently been declared over, the result of torrential winter rains that hit the state this year.

About those rains. They are directly linked to climate change and in more than one way. Now we're getting an object lesson that too much rain can be almost as bad as none at all when it comes to the food supply.

January's monster storms and flooding in California inundated farmlands up and down the state, dealing a blow to crops of vegetables, citrus and nuts.

While the series of tropical storms benefited some drought-stricken areas of the state, the heavy rains brought flooding to vineyards in Northern California and harvest delays further south for vegetable growers. Some citrus and nut growers were hurt too, including the loss of trees during strong winds.

"For many of our farmers, it's difficult to get in to plant or they have crops in the ground that are hard to harvest because the fields are muddy," said Tom Nassif, president and CEO of Western Growers, a California-based trade group representing farmers and their workers who grow about half of the nation's fresh fruits, vegetables and tree nuts.

Here in Canada, the California deluge is reflected in soaring prices for lettuce and other leafy green produce if you can find them at all.

It reminds me of an account I read a few years ago about a semi-nomadic herdsman, a pastoralist, in the sub-Saharan Sahel of Africa. Many generations of his family had made their living in that ancient way. Then, in the span of just two years, that all came to an end. Flash floods claimed half his herd the first year. Severe and sustained drought took the remainder the following year. The herdsman was left with no option but to gather up his family, leave the land, and to try to eke out some subsistence living in the city.
Posted by The Mound of Sound at 8:46 AM

I judge governments of all sizes on a couple of factors that most people ignore: how well they maintain infrastructure and how well they feed their population. As to the latter, how well prepared are the powers that be for a meltdown in the corporate food chain? Things can go wrong, break down, fall apart. For example, where I live the area was almost 100% food self sufficient up until the 1950's. Citrus fruits had to be imported and fish brought up from the coast but everything else grew here. Zucca melons were a major part of the diet. Today, we can only supply about 5% of the diet. The corporate food chain dominates almost completely. Global warming may send a terrible shock through here.

I'm starting a back yard garden.

We live in a new time, Toby. Gone are the climate of the Holocene with its reliable and gentle precipitation patterns carried west to east on the predictable jet stream. Those conditions generally ensured that crops received what was needed as it was needed throughout the growing season. Too much rain could leave the farmer unable to get on the land to plant or could drown out the crop or, in late season, prevent the farmer from getting on the land to harvest.

That gentle, reliable precipitation pattern plus fossil fuels enabled our species to grow from about 2.5-billion at my birth to three times that number today. In less than one lifetime we've tripled our numbers globally even as we have increased our per capita consumption far in excess of the Earth's resource carrying capacity. The last time man lived in sustainable harmony with our one and only biosphere is estimated to have been in the first half of the 70s when we hit 3-billion. Since then we've kept going and growing mainly due to parlour tricks and sleight of hand.