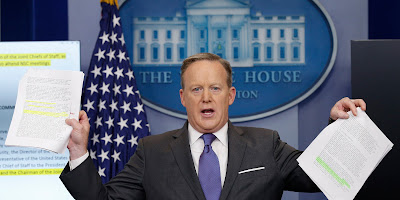 "We didn't use chemical weapons in World War II," Spicer said when discussing alleged Russian complicity with the Assad regime's assault last week. "You had someone as despicable as Hitler who didn't even sink to using chemical weapons. So you have to, if you're Russia, ask yourself if this is a country and a regime that you want to align yourself with."

I guess Sean never heard of Zyklon B or how the Nazis used it to exterminate millions of Jews and political prisoners at Hitler's concentration camps.

Spicey then scrambled to get back on his feet.

"When you come to sarin gas, he was not using the gas on his own people the same way that Assad is doing," Spicer said of Hitler. "He brought them into 'the Holocaust center' and I understand that. But I'm saying in the way Assad used them where he went into towns, dropped them down."

He (Hitler) brought them into the 'Holocaust center'? Oh, that Holocaust Center, of course. And they didn't 'drop them down.' Those chemical weapons were piped in through shower heads. Of course, all the difference in the world.

Compounding the 'his own people' theme, Spicer added, "I was trying to draw a contrast of the tactic of using airplanes to drop chemical weapons on innocent people," he said in a written statement.

The Guardian adds this:

The statement came on the first day of Passover, the Jewish holiday which commemorates the liberation of the Jewish people from slavery in Egypt. The holiday is one of the holiest days in Judaism and has been used a metaphor for the oppression that Jews faced throughout history, including under Nazi Germany.

While Hitler might not have used chemicals as a weapon of war (although he did for even more heinous purposes), Trump's much-beloved Winston Churchill did.


Yes, as I wrote on this blog many years back, in 1920, while Foreign Secretary, Churchill directed the use of chlorine gas delivered via artillery shells into Iraqi Kurd villages that were reluctant to remit taxes. I even found part of a speech wherein Churchill faced his critics in the Commons, calling them gutless for objecting to the use of chemical weapons.

Apparently he also used them in Russia in 1919 against the Bolsheviks.

I wasn't aware of the Russia angle before, PLG. Thanks for pointing it out.

The gaffes just keep on coming. Spicey went on fake news CNN to apologize to Wolf Blitzer for his Hitler blunder. In doing so, he accidentally let slip that Trump's goal in Syria is “to destabilize the region.”

Finally, some refreshing honesty from the Liar-in-Chief's mouthpiece.

Spicer wears his suit like a Jehovah's Witness on a Saturday morning door knocking visit.

He is also just as purposely unaware of the real world as those evangelists.