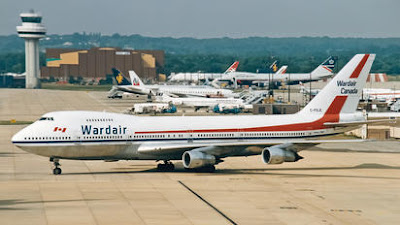 A couple of days back I watched a few YouTube videos of my favourite Canadian airline, the legendary Wardair. Max Ward brought us the pinnacle of Canadian air travel and it's all been downhill ever since. Spacious, comfortable seats. Meals served on china with stainless cutlery and wine served in something called crystal. Even back then it felt like Heaven.

Those days are gone. Wardair is gone, bought out in the late 80s by Pacific Western Airlines, bought out in turn by Canadian Pacific Airlines, and ultimately consumed after a dog eat dog death match by Air Canada.

The people's airline introduced the unwashed horde to a new level of service often called "cattle class" in honour of feedlots across the country. If you want to be treated somewhat decently you up the ante and pay for business class or, if you're mentioned in the will, first class. Anything to avoid the humiliation and debasement of economy.

It was about that time that I parted company with commercial aviation. I'd pretty much been where I wanted to go. I'd seen what I wanted to see. I had my share of air travel and plenty of it.

Yet I was still struck today when I read the teaser on the CBC web site, "Are Canadians ready for no-frills flying?" WTF? They've been living with no-frills flying for the past 20 or so years, or so I thought. Guess I was wrong. Apparently the airlines have put their furious minds to how they can make the ordeal of modern air travel even more unpleasant.

Passengers pay extra for food and luggage; we're all used to that. There's a fee for carry-on baggage as well, in most cases. You want to get on early, so that you can stow that bag in the overhead compartment? There's a fee for that. Can't print your boarding pass at home. That'll cost you. The innovation is limitless. Uzbekistan Airways and Samoan Air charge passengers by weight. Just saying.

Most Canadians have flirted with ULCCs in Europe or the U.S., or even here in Canada with NewLeaf in the past year, but the no-frills airline is going mainstream now with WestJet's entry into the market.

Well, if ultra-low cost carriers are your thing, be my guest. At least there are some things they won't be able to charge extra for, luxuries such as elbows in your ribs, the noise and, of course, the smell.

I do remember Ward Air and still have a match book from the airline. those were the days, we could even smoke. all air lines had decent service and there was lots of room on the flights. These days I'd rather spend 10/12 hours driving then an hour or so on a plane. It truly is cattle car class these days.

I think their new no frills airline will have smaller seats, less leg room, etc. wonder what they will do when a disabled person wants to book.

It may have been James J. Hill, the Great Northern Railroad exec who said something to the effect that there is more profit transporting pigs than people. He was assuredly right. What is so puzzling to me is that so many people choose to let themselves be treated as pigs in order to save a buck or two.

You want to be inside the plane for your flight? That's extra.

Yeah, the time when flying was enjoyable, something one might even look forward to, is now a time past. Flying pigs indeed.

There was a now little-known group called the Railway Economists who basically proved that in the presence of price competition, businesses such as railroads will inevitably bankrupt themselves. It would apply to airlines too--they would absolutely have predicted the waves of price wars and mergers and bankruptcies in the (privatized and deregulated) airline business.
See, here's the thing: A business that requires big capital expenditures, with heavy fixed costs, is vulnerable to a basic problem if it has to compete on price with rivals. The problem is that when you're charging passengers, you're charging them for two components of your costs: The costs you actually incur per customer, like fuel use and paying staff and buying airline food and whatever like that. AND, the costs you incurred before you even got any customers, like paying for big expensive jets, access to chunks of airports and so on. Getting this latter stuff usually involves taking on debt, which you're trying to pay off.
So, here's the rub: Say you have two airlines. And say either airline can break even with half the passenger base at $1000 per ticket. Of that, $500 goes for operating costs and $500 is debt service for sunk costs like jets. Airline A would make far more money if it had ALL the passengers at $900. More even than you'd think because the debt service would stay the same, spread over more passengers. So let's say it cuts the price. Airline B is better off matching or exceeding the price cut than losing all its customers, right?

Where it gets nasty is that, after they've cut the prices a couple of times, they are now both losing money, but they are also caught: If they're charging say $800 per passenger now, they in a sense lose money on each passenger--but they'd still be worse off if increased prices and lost business, because each passenger still pays for more than the operating costs it incurs.
The railway economists concluded that in businesses like that, if there is price competition the price charged per customer will inevitably fall to just over the operating costs per customer, leaving the interest on the debt, the sunk costs, largely unserviced and resulting in a spiral into bankruptcy. This can only be stopped by either a price cartel, mergers until monopoly is reached, all competitors but one going under, or nationalization. Or a combination of these things.

In airlines, we've had waves of bankruptcies and mergers, leading to behemoths like United with some ability to set prices and erect barriers to entry, but it is unlikely that the story is yet over. There will likely continue to be crisis in the airline industry until some monopolist emerges capable of thoroughly cheating us without challenge.

True enough, PLG. I opposed airline deregulation from the get-go. Before dereg, Canada had two healthy flag carriers. By giving each airline preferential access to certain high profit routes the same airlines could be required to offer jet service to remote northern destinations. This had a significant impact on opening up the north.

Mulroney, in one of his first acts of neoliberalism, put paid to regulated aviation in Canada. We wound up with A/C and CP running half-empty or worse flights from Vancouver to Toronto, both losing their shirts but intent on maintaining a competitive market share.

First to go was the jet service to secondary airports and the return of turboprop service, such as that was. Then the airlines began a pattern of strategic mergers/takeovers by which one airline after another was consumed, eliminated, until there finally was just one.

AIr Canada would make a friggen killing using that formula.

These past two years I have squeezed on board flights to Mexico.
They seemed roomy to flights I have taken with Easy Jet in Europe.
It amazing what inconveniences and discomfort the average flyer will put up with to go to his or her favourite beach with cheap booze.
Discount flying is sometimes the only way to go between point A and B as there are few other choices.
Discount flying is also a symptom of our attitude to life ; comparable to Wal-Mart shopping.
Wal-Mart flying is also driven by easy credit ; you cant even pay by cash onboard Wal/West Jet.

It's not for me, TB. Fortunately I'm quite content to give up air travel and to find my recreation spots right here on the island.

Flying can be quiet existing.

Overbooking is a FRAUD.

When people and especially legislators wake up to this fact?
And criminalize it!
Selling of non-existing seat (in hope that some folks will not show up) is a criminal act, plain and simple.
A..non

Anyong...I also flew Ward Air...it was such a pleasure. However, WestJet doesn't want any of those pesky already established airlines like Ryan Air setting up business here.

A..non, it's hard to argue with your logic. Yes, to knowingly oversell seating, gambling that there'll be enough no-shows to let you get away with it and thus line your profit margins, ought to be prohibited. Government has the authority and the responsibility to regulate this industry.

Anyong, it's curious how they offer "cattle car" service these days at the same price structure of the past. No airline ever welcomes foreign competition. They all lobby fiercely against it. The experience of Emirates airways is a fine example.

Mound, perhaps we just need an entrepreneurial lawyer in need of some cash to make the fraud (preferably a class action) case...
A..non

At least you don't have to pay to get "roughed up" on a flight....yet.