Is Prince Jared of Kushner the pin in the grenade about to devastate Donald Trump's Oval Office?

Kushner is now Trump's "go to" guy and, in the process, he seems to be elbowing out Trump's in-house Fenian, Steve Bannon. The Daily Beast claims Bannon, recently turfed from Trump's national security council, is losing his shit over Kushner's rise to dominance.

The fighting between Kushner and Bannon has been “nonstop” in recent weeks, according to sources who spoke on condition of anonymity. It’s been an “open secret” that Bannon and Kushner often clash “face-to-face,” according to senior officials.

One official said Bannon has lately complained about Kushner trying to “shiv him and push him out the door” and likened him to a fifth column in the White House.

“[Steve] recently vented to us about Jared being a ‘globalist’ and a ‘cuck’…He actually said ‘cuck,’ as in “cuckservative,’” the administration official told The Daily Beast.

The BBC has this "war room" photo of the Trump gang during the cruise missile attack on Syria. 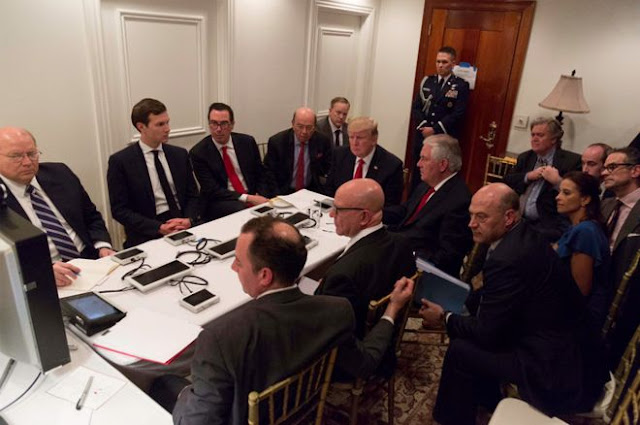 It shows Trump, Tillerson and Kushner at the "big boys" table with all the electronics while Bannon (and Miller) sits by the wall competing for space with a lamp shade.

On Wednesday, Politico and The New York Times reported that things had gotten so heated and tense that Bannon was even considering tendering his resignation. Bannon told Politico this was “total nonsense.”

However, it’s clear that Kushner has been expanding his reach and level of influence in Trump’s core circle of advisers, and that the two men are essentially working against one another as they attempt to keep the president’s ear and affections.

“I love a gunfight,” Bannon told his associates and allies since Wednesday, according to Axios.

The Times also reported that “Bannon’s Svengali-style reputation has chafed on a president who sees himself as the West Wing’s only leading man,” and that “several associates said the president had quietly expressed annoyance over the credit Mr. Bannon had received for setting the agenda—and Mr. Trump was not pleased by the ‘President Bannon’ puppet-master theme promoted by magazines, late-night talk shows and Twitter.”
Posted by The Mound of Sound at 1:01 PM

Surprisingly, Rinse Pubis is at the big boys' table. Axios is reporting that he and Bannon are about to get the bum's rush:

President Trump is considering a broad shakeup of his White House that could include the replacement of White House Chief of Staff Reince Priebus and the departure of chief strategist Steve Bannon, aides and advisers tell us.

We'll see. I'm sure whoever replaces them will be just as odious and long-lasting. Kushner, OTOH, isn't going anywhere - that's how nepotism works in a banana republic.

As an aside, those sure are cheap, uncomfortable-looking chairs they're sitting on. I thought Taco Del Mar was supposed to be a luxury golf resort.

The chairs they're using are often seen in photos of the Mar a Lago dining room.

As for Kushner, Trump doesn't trust anyone more than his immediate family members. Bannon refuses to realize he's pissing into the wind.

Actually the photo is of the Trump inner circle playing scrabble.
The word they are struggling with is

One day they will get it
Sorry G*t *t.