A Blast From the Past - Harry Truman 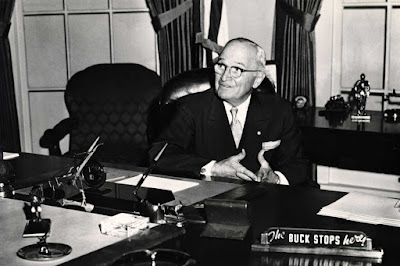 "The Buck Stops Here" Harry Truman, the haberdasher from Kansas City, Missouri. His had his flaws, some of them more glaring in hindsight, but he accepted responsibility for his actions.

Could you imagine that sign atop Trump's Resolute Desk in the Oval Office? The buck never stops at Donald Trump's desk.

One other thing. This post is not an invitation to wax self-righteously about Truman's decision to nuke Japan in WWII. I believe he made the wrong call but, either way, that's off topic. Save your scorn for another day and another post.
Posted by The Mound of Sound at 3:07 PM


Fair warning, Karl. I asked you not to open the debate over the bomb. For some reason you chose to piss in my shoe. Adios, pal.

ignoring the stopping buck and the prissy shoe stories, the tale of him walking to the train station with just his wife while Ike was being sworn in, is my favourite.