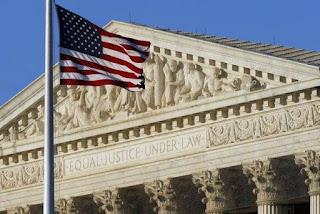 Brett Kavanaugh didn't earn his place on the US Supreme Court on his merits. He was picked from a list of 25 reliably 'movement conservative' candidates handpicked by the Federalist Society. Ideology was the key.

Now it's the Heritage Society, another hard rightwing outfit. They're even more ambitious.


The New York Times is reporting that the Heritage Foundation, one of America’s leading conservative think tanks, has started a “training academy” for conservative law clerks, who have to guarantee that they won’t share any information about what they’ve learned. According to the Times, the application material for the training academy speaks about “generous donors” who were providing “a significant financial investment in each and every attendee.”

... Sanford University law professor Pamela S. Karlan was among those expressing alarm. “Law clerks are not supposed to be part of a cohort of secretly financed and trained partisans of an organization that describes itself on its own web page as ‘the bastion of the American conservative movement,’” she told The New York Times. “The idea that clerks will be trained to elevate the Heritage Foundation’s views, or the views of judges handpicked by the foundation, perverts the very idea of a clerkship.”

Heritage Foundation spokesperson Breanna Deutsch was reticent when questioned by the Times. “It’s a private program, and that’s the way we’d like to keep it,” Deutsch said. “Word did leak out a little bit about it, which is fine, but it’s going to remain a private program.”

Judicial capture. Trump's two Supreme Court picks, Gorsuch and Kavanaugh, were groomed and packaged by rightwing organizations to control the judiciary, effectively putting an end to the rule of law in America.

A few years ago I read an eye-opening article that said that America's corporate sector and the hyper-rich were not seeking freedom from government. They were not out to shrink government. What they were after was nothing less than to own the American government.

You act like it makes a difference. Putzhead Chuck Schumer just made a deal with Turtlehead Mitch McConnel to allow 15 of Trump's lower court judicial nominees to pass through unobstructed so the Senate to go into early recess and allow the Senators to spend more time with their fundraisers. If this isn't enough to tell you that America is really just a one-party state with two heads, I don't know what else would.

While they’re worried about secrecy, I wonder if they’ve considered that any prospect low enough apply to their academy could probably teach them a thing or two about ratfucking.

Now just wait until ALEC gets its teeth into their precious Constitution. Then we’ll find out just what a bunch of “strict constructionists” Chuck and his gang have been paying their various foundations, institutes and societies to groom or keep off the welfare rolls.

“The accumulation of all powers, Legislative, Executive, and Judiciary, in the same hands, whether of one, a few, or many, and whether hereditary, self-appointed, or elective, may justly be pronounced the very definition of tyranny.”

Okay. We’ll keep working around that part. Just keep it a secret. And of course, didn’t Madison also say something regarding that the people who own the country should be the ones who govern it?