It's Time - Time for Bavaria, Time for Canada 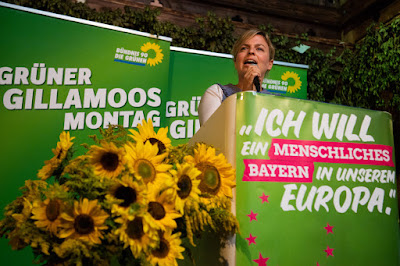 In Germany, the Green Party is on a roll. In the upcoming Bavarian elections the Greens hold a solid second place and they're rising in other parts of Deutschland. From Foreign Policy:


...the real political earthquake this election cycle has been the rise of the Green party, which has more supporters—on both the left and the right—than ever.

(Indeed, according to the Forsa research institute, only 60 percent of new Green supporters come from the left of the political spectrum.) With such broad backing, it is no wonder that the Greens stand poised to win 18 percent of the vote and come in second in this weekend’s race in Bavaria, even displacing the SPD.

The green wave in Germany’s south follows successive gains for the party all over the country and portends a major role for the Green party in future federal governments. If the CSU wants to maintain its position in Bavaria, it could do worse than ally with this environmental group-turned-serious political contender.

...The Greens, founded in 1980, first took on a governing role at the federal level two decades ago when they formed a coalition government with the SPD. When the SPD lost to Merkel and her CDU, the Greens once again become a reliable opposition party. Its former partner, the SPD, entered into governing coalitions with the CDU during Merkel’s first, third, and current terms as chancellor. In doing so, the SPD has seen its support plunge. Much of that support has gone to the Green party, which has, over time, expanded its platform to cover topics ranging from foreign policy to digital governance.

In Europe, the Green Parties are actual political parties.

In North America they are either vanity purity pony campaigns, or Russian fronts.

In the last Federal Election, the Green Cantidate here spent $1500, got roughly 1500 out of the over 70,000 votes cast, and ran on a platform of legalizing pot, banning logging, ran hint and mining,


And your point is what, Jay? You would have us vote for the two main parties who vie with each other as to which can best flood the world markets with bitumen?

Maybe it's time for all the loyal dippers who still believe in labour, equality, climate repair, etc... should cast our lot in with the greens and give up on the wallowing state of the NDP to do anything. If indeed the vote will be split, let's split in the other direction no matter how futile some might declare. MJW

In my riding, the only cantidate for decades, with a chance to beat the Nazi Party cantidate, has been the dipper.

Since the redistricting however, the Conservative cantidate has won, fairly easily.

Now the Con's under Scheer are going full Nazi.

One has to vote riding by riding, not nationally.

Very few Canadians are members of a Political Party.

That could be changed, but few Canadian Political Parties are interested in internal democracy.

If the Greens were serious, they could set out a national platform of 4 big things, 4 small things, ( a term agenda), recruit members, fundraise, activize a base.

But they are not a serious Party.

As a result, my only electoral choices are to vote "against",

I am against having the Nazi Party run Canada, so, given the neocon meltdown of the Dipper's, the empty Granola platform of the Greens, I'll look at the local polling and cast my vote for the best compeditor to the Nazi Party.

How did voting 3rd party work out south of the border.

We don't have the luxury of "protest" votes anymore.

"You would have us vote for the two main parties who vie with each other as to which can best flood the world markets with bitumen?"


Only the Lib's and the Con's have a shot at forming the next Federal Government.

While the Lib's are bad on Global Warming, they do have a Carbon Tax.

The Con's are worse and have come out against their own Carbon Tax that the Lib's "stole".

On every other issue effecting Canadians, Immigrants, Minorities, Indigenous Peoples, the Con's have gone full Nazi.

I'm not going to cast a symbolic protest vote for the Green Party, that will result in the Con's getting elected and setting up Concentration and Rape Camps on our borders too while allowing the Saudi's free reign to kill, torture and loot.

Mound , the real story is not the green ( who are new communist ) , and it is not alternative for Deutschland (which are the new nazi ) . The real story is the centrist disintegrating in Germany (and the whole of Europe) . The EU scepticism are on the rise in Germany , when the germexit arrive , the EU is finished .

very nice put up, i certainly love this web site, carry on it best online casinos

An interesting discussion is worth comment. I feel that you need to write extra on this topic, it won't be a taboo subject but generally persons are not sufficient to talk on such topics. To the next. Cheers best online casino