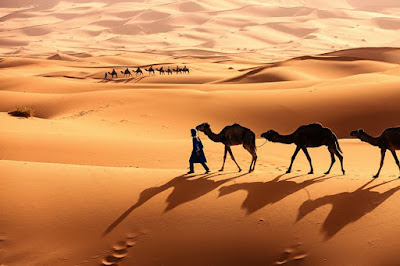 In today's freak weather news, scientists have discovered a new "atmospheric mechanism" whereby the polar jet drags hot dusty air from the Sahara to the eastern side of the North Atlantic into the Arctic. 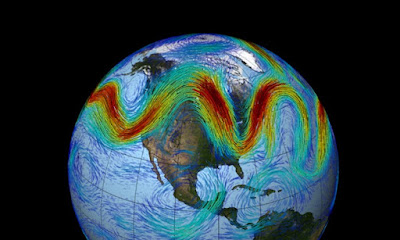 It seems the polar jet, known for creating Rossby waves as shown above, triggered a cyclonic storm over the African Sahara (I know, Africa and Sahara are redundant). A few years ago this wave phenomenon brought a freezing ice storm that immobilized Atlanta, Georgia while simultaneously dragging warm air from the south to give Barrow, Alaska a balmy 62F February day. It's wacky, yeah I know.


Research scientists at NYU Abu Dhabi, along with other global researchers, have identified a new mechanism by which warm dust travels from the Sahara Desert to the Arctic Circle, which has been proven to affect rising temperatures and ice melt in Greenland.

Their findings highlight the role that the polar jet and associated atmospheric circulation plays in the transport of mineral dust from the Sahara desert to the Arctic across eastern side of the North Atlantic Ocean.

A meandering polar jet was discovered as responsible for both the emission and transport of dust from Northwest Africa to the Arctic. The emission has been linked to an intense Saharan cyclone that formed in early April 2011, which was caused by the intrusion of an upper-level trough emanating from the polar jet.

The study has found that atmospheric circulation of this nature enables the transport of dust, warm and moist air masses from subtropics and mid-latitudes to the Arctic, where approximately half of the warming is now being attributed to increased moisture and heat fluxes transported to the region.

The warm and moist air masses accompanying the Saharan dust caused a rise in surface temperature of 10C for more than three consecutive days upon reaching southeastern Greenland. Subsequent temperature observations detected increased melting within the ice across this same area.

"The polar jet stream has been identified as the main driver for such events leading to the transport of large amount of dust to high-latitudes," said Diana Francis, atmospheric scientist at NYU Abu Dhabi and lead research scientist in this study.

"If the polar jet is set to slow more frequently due to the changes in the Arctic climate system and to the Arctic Amplification, such events are expected to become more frequent," Francis added.

Fortunately our political leaders will put an end to this nonsense any day now. Sahara dust in the Arctic, really. What next? (hint: wait and see)

Are you familiar with this? https://earth.nullschool.net/#current/wind/surface/level/orthographic=-59.82,27.66,325


No, DJ, I wasn't familiar with it. However it did send me searching for info about the cyclonic event shown as occurring between Greenland and Iceland.

Fascinating. I'll bookmark that page. Many thanks. I do appreciate these helpful links.

You're welcome. Did you click on "Earth", lower left? There are adjustments.