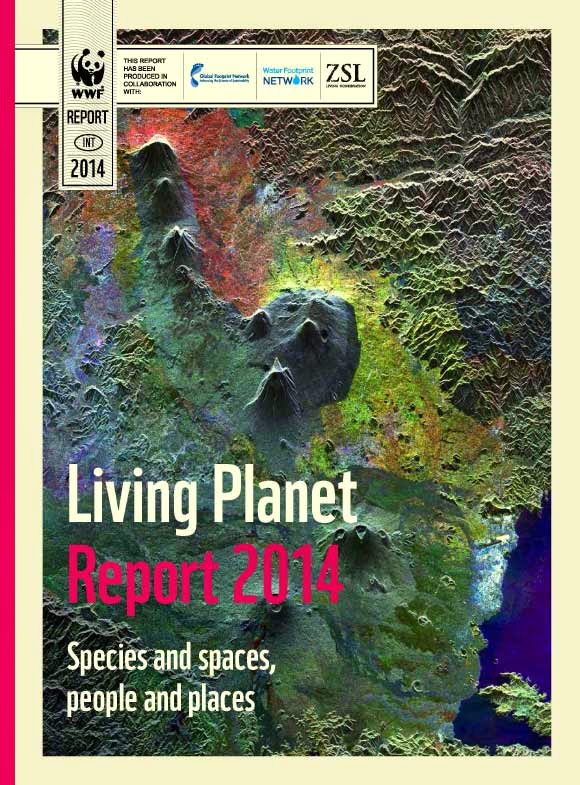 Forty years and counting.  That's how long mankind has been outpacing nature's replenishment rate of essential natural resources - water, biomass, the atmosphere.  For 40-years we've been running ecological deficits at a steadily increasing rate.  Not only are we consuming more than the Earth can provide, our shortfall is getting worse year by year.

Just out, the biennial Living Planet Report for 2014, produced by the World Wildlife Fund in collaboration with the Global Footprint Network and the Zoological Society of London.

The central theme is that, not only are humans consuming renewable resources at more than 1.5 times the Earth's ability to replenish them but animal and plant species are falling extinct because of it.  We're not only eating our seed corn, we're eating their share too.  To put this in context, over the past 40-years, the Earth has lost 50% of its wildlife.

"It is no coincidence that our Ecological Footprint has climbed while biodiversity has plummeted. Overshoot is a core pressure on biodiversity, and WWF is the leading conservation organization recognizing and addressing this link," said Mathis Wackernagel, President and Co-founder of Global Footprint Network. "Humanity must learn to live within the budget of nature, not just for our own welfare and resilience but also for the well-being of countless other species on our planet."

Global Footprint Network provides the Living Planet Report’s measure of humanity's Ecological Footprint, which calculates the amount of biologically productive land and sea required to produce all the resources a population consumes and to absorb its waste, with prevailing technology.

According to the report, it would take 1.5 Earths to produce the resources necessary to support humanity’s current Ecological Footprint. This global overshoot means, for example, that we are cutting timber more quickly than trees regrow, pumping freshwater faster than groundwater restocks, and releasing CO2 faster than nature can sequester it.

"Nearly three-quarters of the world's population lives in countries struggling with both ecological deficits and low incomes," noted Dr. Wackernagel. "Growing ecological constraints demand that we focus on how to improve human welfare by a means other than sheer expansion."

And thus the argument is made for the urgent need to transition from neoclassical, GDP growth based economics into a Steady State economy in which the economy is maintained within the capacity of the environment.  That sounds so obvious and yet the very idea is heretical in the boardrooms and legislatures of the Western world.

An eye-opening fact sheet about what our species has become and what it means to the Earth and everything living on or in it is available here.  To see an analysis of ecological deficit or surplus by country, go here.  The good news, for Canadians, is that our country remains in a healthy ecological surplus - a function of the massive size of our landmass and our relatively small population.  The less than happy news is that the sole country with which we share a border, the United States of America, is running a serious ecological deficit.  How this disparity will play out between our two nations and our peoples is worrisome, the more so because this is a looming problem we're not even beginning to discuss.

If there's one key thing to take away from this, perhaps it's that climate change, while a clearly existential threat to all life on Earth, is not our only inescapable and potentially existential challenge.  Whether it's greenhouse gas emissions or over-consumption or overpopulation, the answer is the same - we have to live well within the finite capacity of our environment and leave enough left over for everything else that lives.

We have to keep in mind that our own survival depends on our ability to share the environment with all other life forms and, if we can't do that, we too perish. Our species is already consuming renewable resources at 1.5 times the Earth's replenishment rate.  What does that leave for other life on this planet?  Nothing. Actually less than nothing.  We're already dipping deeply into our planet's reserves.  Essentially, from August onward, we're living off those reserves.  As these resource reserves reach critical levels we will trigger the collapse of other species that, in turn, will rapidly hasten our own.