This Could Be Another Difficult Day for Mr. Trudeau 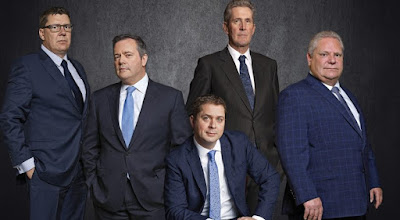 He panicked and tossed away $4.5 billion on a pipeline project, money we might not (probably won't) get back. He's about to pour another seven to nine billion into constructing the Justin Trudeau Memorial Trans-Mountain Pipeline.

At the time the prime minister justified this climate wrecking venture as the price we had to pay to bring Alberta onside with carbon pricing, emissions cuts.  The outgoing premier of Alberta, Rachel Notley, dutifully nodded, a wry smile crossing her lips.

The predicted incoming premier, Jason Kenney, won't be fulfilling Ms. Notley's eco-pledges. He will, however, expect Justin to finish that pipeline and be quick about it. And Jason knows Justin can be played.

Welcome to a future of pipeline politics, an issue tailor-made for greasy pols like Kenney.

Jason knows that the Sword of Damocles hangs over Alberta's bitumen pits. With the price of both clean energy generation and storage plummeting, the writing is on the wall for high-carbon/high-cost/low-value fossil fuels - i.e. bitumen. The halcyon days of the Tar Sands are over. Analysis after analysis reach the same conclusion - it will still sell in limited amounts at marginal prices.

There'll be blame aplenty and endless finger-pointing by those not wanting to get their fair share. For some, such as Kenney, an easy out will be the pipeline. The popular narrative, implausible but ingrained, is that Alberta's economic woes are the result of a lack of pipeline capacity. Ottawa has dragged its heels, British Columbia has thwarted Alberta's divine right to imperil BC's coast, yada, yada, yada.

Blaming outsiders is key to ignoring that Alberta's real woes are self-inflicted. It's economy is internally destabilized by provincial energy policy.

During the era of Ralph Klein the people of Alberta were conned into believing they could live beyond their means. Oil and bitumen royalties would cover the tab. No need for sales taxes. Those were for losers. A lot of them still believe that nonsense.

Jim Prentice wanted to bring back the long pants (i.e. taxes) but, when he sought a mandate in 2015, Alberta voters punished the PCs, ending their 40 year reign and consigning them to third place.

Alberta would remain a place that could pay its bills and provide basic services so long as oil prices were booming. That's high-grade stupid.

The delusions of oil run deep across Alberta but, like most fantasies, they can leave scars when they're taken seriously. In Alberta, even education has been neglected, unable to overcome the allure of easy money in the oil patch.

While postsecondary education is not an issue that will get the blood of Albertans boiling the way Quebec and equalization do, it’s arguably far more important to the province’s future. In fact, there is an incipient crisis in this area that so far has been largely ignored by Alberta’s political masters.

Here is the problem.

Over the past several decades, young Albertans – especially young men – could get good-paying jobs in the oil patch right out of high school. That’s no longer the case – and likely won’t be ever again. And beyond disruptions in the global energy market, advances in the world of technology – robotics, artificial intelligence, among others – are also affecting job opportunities for low-educated workers.

...Alberta has the lowest participation rates for postsecondary education in the country. According to a recent paper done for the Council of Post-Secondary Presidents of Alberta, between 2007 and 2014 the participation rate for men and women 18 to 34 averaged just 17 per cent. Nationally, that rate fluctuated between 22 and 24 per cent.

...Others have tried to sound the alarm about Alberta’s dismal record on research and innovation, which is what the future is all about. The province received an overall grade of D from the Conference Board of Canada in itsinnovation report card, with a particularly poor mark for research and development.

In its paper, the council also points to something a recent TD Economics study called the “scarring effect.” This is the wage penalty associated with the period of unemployment for youth first entering the work force; the longer young people sit on the sidelines without a job, the greater the impact it has on both their future earnings and the economy overall. In a province with an outsized number of kids without any secondary education, this could be significant.

Today's editorials in the Edmonton Journal and Calgary Herald back Kenney all the way as though, once Notley is driven out, Alberta's petro-economy will return the province to bountiful prosperity of its past glory. Full steam ahead and spare not a thought to the consequences. This brought to mind a recent column written by Andrew Nikiforuk in The Tyee, "The Coddling of the Alberta Mind."


Oil, a commodity that nurtures dependency, has so coddled the Alberta mind that it has fostered a provincial culture of victimization as poisonous as the identity politics unsettling university campuses.

Moreover the province’s potential for offence-taking has become as grand as Justin Trudeau’s vindictive Liberal Party of Canada. It can’t tolerate any truth-telling either.

...Albertans have become such a fragile, oil-reliant people, reasons Kenney, that the province now needs the equivalent of university Bias Response Teams, in this case to foster “a safe and inclusive environment” for its petroleum exporters who have now claimed Alberta’s identity as their own.

(The rulers of Venezuela, Saudi Arabia and Russia, we should remember, don’t much like oil critics, either. The political records show that oil relishes conflict and breeds political aggression like no other commodity, except cocaine.)

...Over many years, Alberta’s Tories repeatedly gambled that the price of bitumen, a garbage crude that requires upgrading and complex refining, could only go higher, and they bet wrong.

So did the NDP, another oil-coddled entity. (And yes, Albertans should be very angry about the gross mismanagement of their gas and oil resources by their elected politicians.)

...Coddling a mind is a terrible thing, but coddling a province is a social disaster.

In the current election campaign, no politician wants to pony up and tell the truth.

It wasn’t foreigners or bad actors who created Alberta’s failings; it was Albertans and their damn greed and lack of strategic planning.

Albertans, and only Albertans, share the blame for not collecting their fair share and saving for a rainy day.

All the angry talk about leaving Canada is the whinging of coddled minds in the land of the Wild Rose. Kenney knows how to play the victim card even better than Notley and, barring some miraculous turnaround in markets for high-cost/high-carbon/low-value sludge bitumen, Kenney is going to be looking for whipping boys.

Just like Trump's Gullibillies, Kenney has a ready-made base of easily-manipulated dupes and he has the manual for their care and feeding. He's a bit like the Nigel Farage of western Canada with Andrew Scheer a dull impersonation of Boris Johnson. They've got their sights set on Justin Trudeau and, for that matter, British Columbia. This could be a long and difficult night for the prime minister and for B.C.
Posted by The Mound of Sound at 5:28 PM

A difficult night for BC indeed, with an even more pro oil (sorry Tar sludge) anti-everything mouthpiece elected in Alberta and an ever increasing litelyhood of his fed buddys gaining power in Otowaaa the senate best watch what they do. The resistance (in the senate)to the proposed legislation to ban tankers carrying more than 12,500 tonnes of crude oil from unloading at ports between Alaska and B.C., down the North Coast, around Haida Gwaii to the tip of Vancouver Island is unbelievable. What could possibly go wrong with tripling the tanker traffic and letting it traverse water where the seaway in narrower than the tankers are long and the whales and other sea life is unique in its type and volume?

.. Albertans (whomever you are) ..
thoughts n prayers eh

Did Jason K 'turn off the tap to BC' as promised ? ?
No ? We are shocked ! Astonished ! Crestfallen ! Bewildered !
Was that not a keystone election promise ? "within an hour" of being elected.. wonderboy Kenney would bring British Columbia to heel, command the 'tidewater' - bring the pipelines to somewhere - miraculously elevate the world price for WCS - benchmark Western Canada Select diluted bitumin - and and and .. oh oh.. ah aww.. its 'ethical' bitumin.. most holy in fact ! Almost..

(FYI Albertans.. he also muttered some dark words about outing certain kids to their parents via Alberta teachers - rest assured evangelicals.. the guy who left Saskatchewan to drop out of a California Catholic University & headed to Ottawa, where he lived.. via Toronto, Ontario .. will not abandon his faith or virginity or invisible friend upstairs for no good reason or money. He will apply his fervour to school curriculum post haste.. presumably Gawd, the Kween et al will 'save the children' from .. well uh.. many things.. like uh the TEACHERS.. !! And the dread EDUCATORS !

Our advice in salamander country.. is get ready for FOUR BITTER YEARS ..
and then he either blows you off (mucho pious excuses) for a return to the big dance in Ottawa
or shrieks and stamps his pudgy feet for MORE TIME .. !
That 'ALBERTA ADVANTAGE' is just around the corner.. can't you see it ?

Sad thing is Jason and co will fail just as Rachel failed and he will still be loved because he is seen as tough man!
As the ship Titanic sinks Albertans ( and BC'ers) will cling to their wallets instead of a life raft.

Perhaps we, in BC, should encourage the dilbit pipeline to hasten their demise?

I can hear, again, the Albertans shout!
We won't do it again, give us one more chance!!
Don't they realise just how fucking stupid they are?