Where the Rubber Meets the Road - Climate Migration - Central America 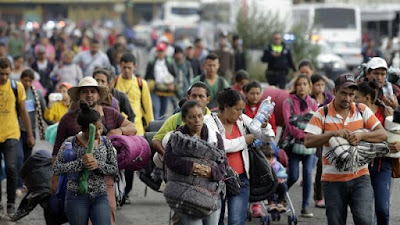 Imagine Central America empty. Not exactly empty but heavily depopulated. Think of it as climate change for the Americas.

It's been coming for a while, several years in fact. A variety of plagues from gang violence to devastating severe weather events and food shortages has resulted in Central Americans in their hundreds trying to find refuge in the United States.

Heat waves, droughts, crop failures and worse have left Honduras, Guatemala and Nicaragua particularly hard hit. Governments in those countries have urged their people to fight famine by eating iguanas, creatures that are sometimes the family pet. That was four years ago. Recent reports indicate even the iguana are now depleted.

What to do, what to do? Central America is one region expected to be among the first to be hit by "climate departure."

2020 - 2023 that's the predicted arrival date of what's being called "climate departure." Think of it as the abrupt transition from "old climate" - the climate you've known all your life - into a "new climate." One of the hallmarks of this new climate is that every year of the new climate will be hotter than the hottest year ever experienced in the old climate. There won't be any cool years, only very hot years.

The average temperature in Central America has increased by 0.5C since 1950; it is projected to rise another 1-2 degrees before 2050. This has a dramatic impact on weather patterns, on rainfall, on soil quality, on crops’ susceptibility to disease, and thus on farmers and local economies. Meanwhile, incidences of storms, floods and droughts on are the rise in the region. In coming years, according to the US Agency for International Development, countries in the northern triangle will see decreased rainfall and prolonged drought, writ large. In Honduras, rainfall will be sparse in areas where it is needed, yet in other areas, floods will increase by 60%. In Guatemala, the arid regions will creep further and further into current agricultural areas, leaving farmers out to dry. And El Salvador is projected to lose 10-28% of its coastline before the end of the century. How will all those people survive, and where will they go?

...Violence and environmental degradation are inextricably linked, and both lead to mass migration. An unstable planet and ecosystem lends itself to an unstable society, to divisions, to economic insecurity, to human brutality. When someone’s home becomes less and less livable, they move elsewhere. Wouldn’t each and every one of us do the same?

This week, the New Yorker’s Jonathan Blitzer published a series of pieces about the impacts of climate change in the Guatemalan highlands, where farmers are struggling to grow crops that they have been farming there for centuries. “In most of the western highlands,” Blitzer wrote, “the question is no longer whether someone will emigrate but when.” A few years ago, I reported from Guatemala’s dry corridor, several hours away from where Blitzer was reporting, where persistent drought had decimated the region’s agriculture, and particularly the coffee crop, on which roughly 90% of local farmers relied. It was a wildly different landscape from the one Blitzer described, but it faced the same problem: if you live in an agricultural zone, come from a long line of farmers and can’t reliably harvest your crops any more, what else is there to do but leave?

Camilo Mora, who heads the climate science team at the University of Hawaii that formulated the "climate departure" theory, understands from first-hand experience the link between hunger and violence. Born in Columbia he lived through it.


In the first world, people don’t know how rich they are, and they don’t realize what is happening in the rest of the world.And for me that’s a driving force. It’s scary to think about climate change because when we start damaging physical systems and the carrying capacity of physical systems to produce food, people will react to this in a terrible way. I’m telling you, I have seen it in my own country. It’s very negative the way in which people react to hunger. And that’s one of the things that’s most frightening to me with this large-scale analysis — the fact that I know we’re on our way to some very disturbing scenarios if we go down this pathway of damaging physical systems in the ways that we are today.

Donald Trump, as is his bent, is determined to worsen the plight of these climate migrants and those who haven't yet fled their homelands. His knee-jerk response to the flood of asylum seekers at the US border is to cut humanitarian aid to the countries these refugees were compelled, for the sake of survival, to flee. What do we expect them to do, stay at home and watch their kids die? Who would do that? Would you? I wouldn't.

What makes this all the more outrageous is the behaviour of the petro-states to the catastrophe that greenhouse gases are inflicting on these "little brown people" who, to us, don't matter.  Their lives are already precarious, even hellish, but we, in pursuit of ever more carbon fuel revenue can and will make it fiendishly worse.   Fiendish - that's a fitting appellation for Rachel and Jason; Ford, Moe and Horgan, and the leaders of all three major federal parties.

This migration could reach a breaking point by the early to mid-2020s as climate departure hits the stay-behind Hondurans, Guatemalans, Nicaraguans and Salvadoreans.

It those Central Americans are looking for asylum in Canada, they had better invest in airline tickets. The federal government is changing Canadian asylum law to disqualify migrants who have already applied for asylum in another country. If you somehow make it into the States and claim asylum, you won't be able to travel to Canada for a better shot at being allowed to stay.
Posted by The Mound of Sound at 10:19 AM

Boat loads of asylum seekers coming to BC, making their way between the bitumen tankers heading off to undefined foreign shores,

It's going to be busy on the west coast.

I think Canadians aren't nearly as "nice" as we're depicted and, if we were faced with mass migration, we would respond as other nations have - i.e. Italy, the US.

Look at how we moan over a few pennies of carbon tax at the gas pump. We claim to want action on climate change with the proviso it's free and demands no sacrifice from us.

What's coming could be on a scale beyond that of many of the wars we've fought, at least in terms of deaths.

Folks who can afford 5-10 thousands of US$ are NOT climate refugees.
They can easily relocate to Patagonia

All of this madness eliminates from Free Capitalism. So the question is...how many of you are prepared to give up some of YOUR money to make life a little easier for people especially Seniors, and people from south America in this country. What are you going to do to help such people who believe Canadians are so very kind and giving. We are wealthy enough in this country that everyone should have a retirement at above poverty line. If Mexico can cut the cost of living in half for Seniors who are 75 and older, surely we can provide more money in OAS to mostly Senior Women. So again...I ask...what are YOU going to do????? Talk is cheap.xxxxx