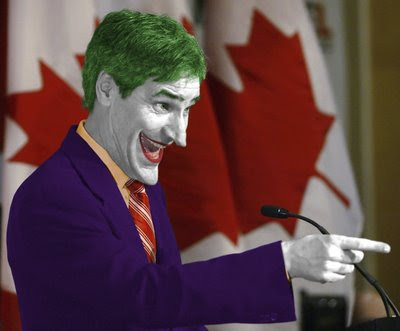 http://network.nationalpost.com/np/blogs/fullcomment/archive/2009/01/09/steve-janke-ignatieff-shift-puts-pressure-on-liberal-left.aspx
Posted by The Mound of Sound at 10:28 AM

Email ThisBlogThis!Share to TwitterShare to FacebookShare to Pinterest
Labels: Ignatieff

But seriously, Iggy's top 3 priorities are infrastructure, tax cuts - and EI, which Harper doesn't support. The NPost is just trying to divide the party between Iggy and Rae, mostly by stirring up pro- and anti-Rae people by painting the left as power mad. I think that's a stretch and I won't play their (NPost) game.

Ignatieff is supporting Israel in its Gaza war. Surely that earns him a reward from the National Post?

This is just smart politics. The very pro-Israel Asper family owns almost half the private mass media in the country. Staying on their right side is essential for any politician who hopes to become PM.

So now it's all out war on Iggy because the party has taken a position on a foreign policy issue with which you disagree?

And seriously, Obama is too progressive for the Ignatieff Liberal Party? The guy who opposes gay marriage?

When some Liberals start taking their cues and guidance from a National Post blogger, the Liberal Party has a problem.

Oh yeah, he will have the support of the Ezra Levant and Kelly Macfartland.

MoS, check out my latest posting. I feel sad the way you are being treated by the prick, Cherniak.

Ted, I forgot all about the gay marriage thing. You're right at least until Iggy figures out how he can game the homophobic vote away from Harper.

While I was never keen on Dion I gave him a fair chance. I understood the anger of a lot of Dion supporters who thought their guy had been stabbed in the back by Ignatieff. I took some flak for it but I urged them all to give Ignatieff a chance to prove he deserved their support. I gave him that chance. He blew it. So, for today at least, you're right. It is all out war on the interim leader of the Liberal Party.

I guess that is what I don't get, Mound. How did he "blow" it. He and the party took a position on an issue with which you disagree. How is that a serious leadership problem? Especially when it would not have been different had the other two contenders won?

I can sympathize with not liking the direction a party goes, honestly I can. But Chretien, Martin, McGuinty (provincially) and certainly Dion have all done lots of things with which I disagree. It has tempered my support but I haven't thrown it overboard.

There are lots of far worse massacres going on in the world. For some reason, whenever Isreal defends itself or whenever someone speaks up for Palestinian victims, the Liberal Party has to go bonkers on itself like issuing just the right statement on a piece of paper by an Opposition Leader will make world that much brighter or blow the party up.

Obviously, the Middle East is of critical importance. I don't get how this is The Most Important Liberal Party Issue since that most awful divisive fight within the party that ensured the Conservatives won the election and almost destroyed the party (i.e.reciprocity under Laurier)!

So I don't get how a single issue over which no one in Canada can do anything about, let alone the Leader of the Opposition, can mean he's blown it and you have to leave the party... when Canada is facing a real crisis right here and now and the Conservatives are going to screw us all over it.

...by which of course I mean the economy.

And one last thing, Mound, because I really do want to know and am sincerely trying to get clarity.

Do you want to be removed from Liblogs or not?

I'd ask you in an email but you don't post your email address.

Ted the Liberal Party should never have picked a dog in this fight. That's something the right does, not any party that I'm going to support. Read Jimmy Carter's really informative article on why this war wasn't necessary and then tell me how a Liberal leader could totally absolve Israel for its share of this. There's a pattern to this guy. He was dead wrong on his enthusiastic support for the invasion of Iraq. I was willing to give him the benefit of the doubt on that but he ended that with his intolerable posturing on Gaza.

Ted, why are you asking me? I've already been booted off Liblogs. Do you see any of the half-dozen last posts there? I don't.

"Ted the Liberal Party should never have picked a dog in this fight. That's something the right does"

Really? Just the right? You mean the NDP statement that clearly attacks Isreal and Isreal only is not picking a dog this fight? (I am here not taking issue with them taking sides, merely pointing out that the NDP takes sides strongly on more issues than the Conservatives, so taking sides on an issue is not a left-right thing.)

"Ted, why are you asking me? I've already been booted off Liblogs. Do you see any of the half-dozen last posts there? I don't."

I think a lot of people are wondering if you got booted or if you got removed at your request. There is a difference.

Yes Ted, that's about all I'd expect from the NDP. I don't know how that's relevant. It certainly isn't to me as I'm not drawn to the NDP or the Tories for that matter. I'm very much a disaffected Liberal.

Mound: It is only relevant because you said picking a dog in this fight was only something the right does.

WTF: Where did I say the NDP picks Hamas?

Not sure about the GREEN hair.
Grass roots?

Really? Just the right? You mean the NDP statement that clearly attacks Isreal and Isreal only is not picking a dog this fight? (I am here not taking issue with them taking sides, merely pointing out that the NDP takes sides strongly on more issues than the Conservatives, so taking sides on an issue is not a left-right thing.)

FYI, this is the New Democrat statement on the situation in the Middle East:

Canada's New Democrats condemn the unacceptable escalation of violence in the Middle East causing death and injury to so many civilians in the Gaza Strip and Israel.

It is a tragedy that hundreds of civilians have again become the victims of violence in this conflict. The continuing airstrikes by Israel on civilians in the Gaza strip and the ongoing rocket attacks on Israeli civilians are serving to compound the existing civilian disaster and further harm chances for a negotiated peace.

We call on the Government of Canada to immediately call for an end to the aerial bombing of Gaza, the blockade of aid to civilians and the indiscriminate rocket attacks on Israel. Indeed, the government must urge both sides to agree to end the current hostilities immediately, reinstate the ceasefire and return to the peace process.

The Government of Canada should also work to ensure that medical and food aid is provided to the civilians of Gaza through U.N. agencies.

New Democrats believe that Canada must pursue a balanced approach to the Middle East crisis, in keeping with Canadians' deep desire for peace in the Middle East and are ready to work with the new administration in the U.S. towards a lasting peace in the region. This goal cannot be achieved while citizens in such large numbers are being killed and endangered.

Ted, you appeared to allude to the NDP supporting Hamas, and no they don't support violence.

I said very simply that the NDP only attacked Israel. Your reposting of the entire statement proves me correct.

Even the most extreme anti-Israel commenter seems to at least acknowledge that Israel has a right to defend itself from attackers and that the indiscriminate firing of rockets with the intent to intentionally target and kill civilians is wrong. The NDP didn't even do that. That is clearly "picking a dog in this fight" which Mound said was only something the right does.

I used the NDP only as an easy example to disprove Mound's claim that non-balance and picking a side was only something the right does.

Who or what the NDP supports, I have no idea. Maybe you can let us know.

The interim leader was obviously playing campaign politics in his unsubstantiated and incredibly biased statements.

Even Bush has thrown in the towel on Israel, meekly abstaining yesterday from its previous threats to veto a Security Council ceasefire resolution that didn't prescribe an end to Hamas rocket attacks as a precondition. Rice backtracked too.

The Washington Post called it a severe reversal. It also declared the Israeli assault a dangerous blunder that has failed miserably. Israel, it noted, has won a tactical (not strategic, merely tactical) victory that's far offset by its enormous political defeat.

Obama has broken with America's isolation of Hamas just as Ignatieff would take Canada down that same failed Bush/Harper path.

I was willing at first to take Ignatieff's contrition over his support for the conquest of Iraq as sincere. Then I read what he actually said, how he couched his mea culpa, what he said of those who had opposed it from the outset. You add to that his imperious posturing over Gaza and his apology looks an awful lot like a ruse from someone who found himself in a dead end bind.

If you want more on that, follow the "Resettle THIS!" link at the bottom of this post.

I think Ignatieff has gone a long way to trashing Canada's credibility in the Middle East.