A Petro-Prophet Says Bitumen is Finished. 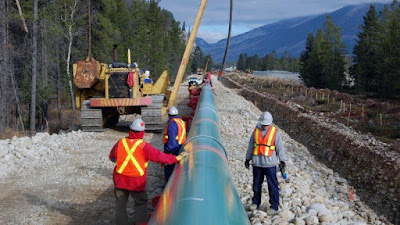 Today marks the resumption of Trudeau's Folly, the multi-billion dollar Trans-Mountain pipeline expansion destined to carry a whole lot of nothing from Athabasca to "tidewater" on BC's Lower Mainland.  The report on CBC this morning even featured an Alberta oil baron who opined that this ridiculously costly pipeline wasn't needed and wouldn't be for a very, very long time (which may be his way of saying "never").


She began looking at the finances of Teck Resources, which was in early days of proposing the Frontier mine that would massively expand its presence in Alberta’s oil sands.

“The Frontier project is uncommercial even at relatively high oil prices,” reads a report Lawrence co-authored in 2015, years before Frontier became a political flashpoint in Canada. Teck’s problems apply to the entire sector, she argued, writing that “in spite of the optimistic rhetoric coming from the industry, the large build-out of the Canadian oil sands is probably not realistic. The implications for Alberta and Canada are only beginning to unfold.”

Lawrence is now predicting that Alberta’s oil sands industry is fast dying. The main drivers are COVID-19 and the plummet in bitumen prices hastened by Saudi Arabia and Russia fighting for world oil dominance. Already the price crash could shutter close to two million barrels per day of bitumen production. Output will stay indefinitely low, expects Lawrence and many other analysts. And that will deal a fatal blow to Canada’s heavy oil industry. “Shale and tar sands, they’re done as far I can see, unless there’s some miracle out there,” Lawrence told The Tyee.

“I just don’t see how they’re going to ever be able to recover,” she said. “There’s just too much oil and not enough demand anymore. And demand’s only going down, it’s not going up.”

“I think that’s magical thinking,” she says of the idea that the oil sands will emerge unscathed from this crisis. While oil sands operators have become more efficient in recent years, the industry still produces some of the world’s most expensive oil, requiring an “unenviable” price of US$45 per barrel to break even, the UK-based consultancy Wood Mackenzie noted in March. By comparison, producers of conventional oil break even at a much lower price. For Saudi Arabia, it’s around US$4 per barrel. So long as oil prices stay low — even Kenney predicts “probably 12 to 18 months” — the oil sands will hemorrhage money.

“It’s just simple economics,” Lawrence says. “I mean, unless you can get tar sands down to $10 a barrel, you can’t compete, and there’s no way they can do it for anywhere close to that. They’ve always been the highest-cost producers.” The only way the industry can recover is with a swift rise in oil prices, but not even top oil producers consider that very likely.

Justin Trudeau and Jason Kenney are political animals. Their objective is to get re-elected and that blurs their thinking.

Does Trudeau's Folly make any sense? Of course not. When you can't get the private sector to touch the project, not even with government guarantees, there's a message in that. It's a lousy deal. There's no money in it. It's a loser. Really bright people - guys like Nicholas Stern and Mark Carney - who have been warning that bitumen is a "stranded asset" are right. Investment is stampeding - away from Athabasca.

Here's a little tip for Jason Kenney. Even the Saudis with their low carbon, high value conventional oil have come to their senses. Today they've tripled the nation's sales tax.


Saudi Arabia’s government said Monday that it would triple the rate of its value added tax on sales to 15 percent and take other measures to shore up state finances as the combination of lower oil prices and the costs of fighting the coronavirus pandemic strain the kingdom’s budget.

The minister of finance, Mohammad Aljadaan, also said that spending on Crown Prince Mohammed bin Salman’s Vision 2030 projects, which aim to diversify the Saudi economy and create new jobs for Saudis, would be cut, according to the official Saudi Press Agency.

JT and JK have painted themselves into a corner. Even though oil and gas has never accounted for more than 3% of GDP, they've sold it as vital to Canadian prosperity. Nothing could be further from the truth. The sooner we shut down the tar sands, the lower the cleanup costs. If the banks and oil companies made bad investments, so be it. Under the rules of the game, they should bear the consequences.

I dislike the term "stranded asset". I prefer "stranded liability".

I've commented frequently over the past five years that none of their mega projects: Site C, CoastalLink Gas or TMX makes the least bit of sense, either environmentally or economically. Anyone with a post kindergarten education should be abundantly aware of this. Which leads me to believe that if they are not intellectually challenged, they must be CORRUPT!

I found an interesting source for gritty info on this front.

Alberta isn't even using their current 'tied water access' cause no one is buying.

It's not just the banks, Cap. I've read that Canadian pension plans are also heavily invested in bitumen. If they are it's almost criminal, given the warnings they've had for years that bitumen was a soon-to-be stranded asset.

Thanks for the link, NPoV. It's eye-opening stuff but it does again raise the question "why" is Trudeau's Folly proceeding.


John, Andrew Nikiforuk explores the madness that is a petro-state in his books, "Tar Sands" and "The Energy of Slaves."

Saudi Arabia’s government said Monday that it would triple the rate of its value added tax on sales to 15 percent and take other measures to shore up state finances..

Too late for Alberta to follow suit.
Saudi has a few $$ in the bank, not so much Alberta.
Saudi can do what the heck it wants, not so Alberta.
Albertans have been brainwashed for years, no sales taxes, little royalties,little environmental responsibilities.
Sad thing is, they have exported the get rich quick ,without responsibility,
attitude to the rest of Canada.
The Alberta 'dream' is much like the American one.
As Carlin said about the dream; you have to be asleep to believe it.

I expect you're right, TB. It's much easier to introduce a sales tax during a boom cycle than in a bust. The only leader who had the courage to broach the idea, Jim Prentice, got knocked out by Rachel Notley and she wasn't having any of it.

Is there anything in one or more of our trade laws that requires Canada to keep the tar pumping?

That's beyond my pay grade, Toby. One of the things that NAFTA taught Canadians is how much sovereignty our federal governments ceded to the private sector through dispute resolution provisions. A government can pass legislation in the interests of the nation and its people but can then be liable in damages for companies adversely affected by those decisions.

Could Ottawa find itself in such jeopardy if it tried to compel foreign energy companies to fund the cleanup of the Tar Sands, especially the tailing ponds? I don't know. Could Canada be on the hook if it discontinues doling out multi-billion dollar annual subsides to these same foreign energy companies? Again, I don't know. Was Ottawa similarly compelled to complete the Trans-Mountain pipeline expansion even to the point of grossly overpaying Kinder Morgan for its hapless pipeline? Could be.

It could be that Canada was effectively blackmailed into funding both the TMX and KXL lines. I just don't know.

Here's an earlier post I wrote on these investor-state dispute resolution clauses.