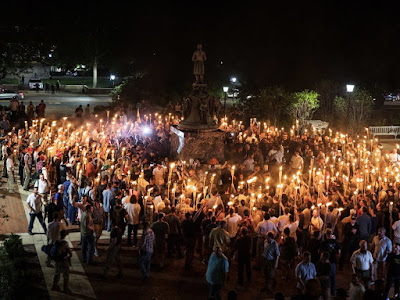 Trump is a master of the "big lie" and he has groomed a significant segment of the American people to accept pretty much whatever hatred he spews. He is Lord of the Flies.

Trump's paranoid racism and xenophobia are eerily reminiscent of another creature of pure evil from another country and another time whose name rhymes with "Shitler." In some ways Trump mirrors early-onset Shitlerism.

Let's not forget that Shitler was enamoured of many things American.  He avidly consumed America's eugenics theory and used it to justify ridding his country of the infirm - the physically and mentally disabled, the infirm, anyone who could be labeled "unfit for life" or "useless eaters." He was also deeply inspired by American racism.

As race law’s global leader, America provided the most obvious point of reference for the September 1933 Preußische Denkschrift, the Prussian Memorandum, written by a legal team that included Roland Freisler, soon to emerge as the remarkably cruel president of the Nazi People’s Court. American precedents also informed other crucial Nazi texts, including the National Socialist Handbook for Law and Legislation of 1934–35, edited by the future governor-general of Poland, Hans Frank, who was later hung at Nuremberg. A pivotal essay in that volume, Herbert Kier’s recommendations for race legislation, devoted a quarter of its pages to U.S. legislation—which went beyond segregation to include rules governing American Indians, citizenship criteria for Filipinos and Puerto Ricans as well as African Americans, immigration regulations, and prohibitions against miscegenation in some 30 states. No other country, not even South Africa, possessed a comparably developed set of relevant laws.

Especially significant were the writings of the German lawyer Heinrich Krieger, “the single most important figure in the Nazi assimilation of American race law,” who spent the 1933–34 academic year in Fayetteville as an exchange student at the University of Arkansas School of Law. Seeking to deploy historical and legal knowledge in the service of Aryan racial purity, Krieger studied a range of overseas race regimes, including contemporary South Africa, but discovered his foundation in American law. His deeply researched writings about the United States began with articles in 1934, some concerning American Indians and others pursuing an overarching assessment of U.S. race legislation—each a precursor to his landmark 1936 book, Das Rassenrecht in den Vereingten Staaten (“Race Law in the United States”).

...A June 5, 1934, conference of leading German lawyers gathered to exchange ideas about how best to operationalize a racist regime. The record reflects how the most extreme among them, who relied on Krieger’s synoptic scholarship, were especially drawn to American legal codes based on white supremacy. The main conceptual idea was Freisler’s. Race, he argued, is a political construction. In both America and Germany, the importance and meaning of race for the most part had been determined less by scientific realities or social conventions than by political decisions enshrined in law.

Shitler had a big fan in American industrial giant and fellow racist, Henry Ford.  Before WWII, Ford's German subsidiary published this ode in its in-house magazine.


We have sworn to you once,
But now we make our allegiance permanent.
Like currents in a torrent lost,
We all flow into you.

Even when we cannot understand you,
We will go with you.
One day we may comprehend,
How you can see our future.
Hearts like bronze shields,
We have placed around you,
And it seems to us, that only
You can reveal God’s world to us.

Gee, that couldn't been written by Trump's base. The sentiment is certainly shared.

Consigning the disabled, infirm and unproductive to his camps and ovens was labeled a policy of social hygiene. These lower orders were a drain on the nation, unfit to live. Some 360,000 were sterilized. Another 250,000 were "euthanized" - murdered.


In 1939 the killing of disabled children and adults began. All children under the age of three who had illnesses or a disability, such as Down’s syndrome, or cerebral palsy were targeted under the T4 programme. A panel of medical experts were required to give their approval for the ‘euthanasia’, or supposed ‘mercy-killing’, of each child.

Many parents were unaware of the fate of their children, instead being told that they were being sent for improved care. After a period of time parents were told their children had died of pneumonia and their bodies cremated to stop the spread of disease.

Following the outbreak of war in September 1939 the programme was expanded. Adults with disabilities, chronic illnesses, mental health problems and criminals who were not of German origin were included in the programme. Six killing centres were established to speed up the process – the previous methods of killing people by lethal injection or starvation were deemed too slow to cope with large numbers of adults. The first experimental gassings took place at the killing centre in Brandenberg and thousands of disabled patients were killed in gas chambers disguised as shower rooms.

The model used for killing disabled people was later applied to the industrialised murder within Nazi concentration and extermination camps such as Auschwitz-Birkenau.
It is estimated that close to 250,000 disabled people were murdered under the Nazi regime.

Trump, of course, is no Shitler. America is no late 30s Germany either.  Yet, lurking beneath the surface of today's America are similar instincts. The past offers a timely lesson of what can happen when liberal democracy entwines promiscuously with illiberal democracy, particularly when the country succumbs to a psychopath.

it is a right wing trait
harper in his day directly quoted hitler a few times
vowing to "return canada /germany to it's rightful place on the world stage" was one
his centralization of power exclusively in the PMO scared me.
americans told him write a hockey book to seem human ffs
kenney is another seething pot of "exclusive" humanity
struggling to at least look human to all
while being the lil dog whistle dollar evangelist he is
but you cant have an opinion on population control without having a list

everyone i'm sure has heard the joke
what do you call a thousand (your choice here) at the bottom of the ocean?
a good start

Shitler went further and promoted the Aryan Ideal. Blond blue eyed super beings. Well he was a reddish-dark haired little nobody himself.

Derek Sloan leads the charge of the Cons to vilify Dr Tam as a Chicom agent. This guy is running for the leadership of the CPC. If he isn't racist, then WTF is he?

After hearing all the gun lobbyists phoning in and polluting the airwaves today because their dire need to own a piece of military equipment to lovingly cradle and caress has been shot down, put together with Mackay's lofty ethical (as if) tones, I'd say we have a ready supply of eager white man knuckledraggers running around pretending to be human rah cheah in Canada. And a lot of them are members of the CPC or run their little autocracy like kenney. I have zero reason to consider anything these visionless people have to say. All they do is react and look down their fake patrician noses at the poor and the brown, and that's presumably why historians call them reactionaries. Stuff 'em all into rural Alberta where we can keep an eye on them and let them stew together.