You Liberals Will Love This

Every morning I listen to BBC's Global News podcast. Some morning it starts with a commercial aimed at Canadian listeners. This morning's ad was a spot by Amica, a Canadian assisted-living company.

The commercial had someone who sounded exactly like Justin Trudeau doing the voiceover. Exactly. The same tone, the same cadence, indistinguishable. Amica, it seems, has concluded that Justin Trudeau's voice is comforting to their target market, seniors. That voice sells.

The rest of the ad, however, was a lot like this: 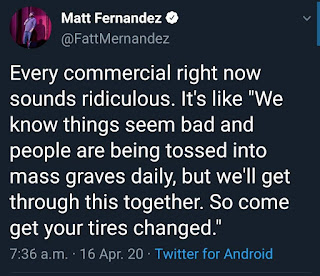 Only for the well heeled.

Assisted 'living' has a doubtable place in this day and age.

Covid 19 could well go down in history as the cull of the old farts!
Perhaps this is why there is move to the acceptance of bring out your dead?

Only in the US!

Everyone would be better off if children took in their parents when they could no longer live independently. If they languish in an inordinately costly nursing home with sketchy care for a few years it can eliminate any prospect of their kids getting some benefit from their assets. How many of these seniors who died in these overpriced plague mills saw their assets exhausted?

Then there was the former nurse on Bowen Island (?) who had a farewell dinner with her family, a brief adieu with her husband before she went over to the other side of the knoll with a dose of Nembutal and a flask of scotch...the idea is not entirely devoid of merit and is supposed to have been addressed in recent legislation. Seems not. But, hey, there's grist for a lot of long conversations herein.

What worries me, Danneau, is when, if ever, we'll have all these important conversations?