About That "One and Done" Nonsense. 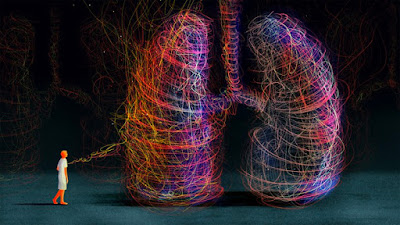 Just as governments across Europe and North America begin to emerge from Covid-19 lockdown. Just as long-shuttered stores and restaurants re-open. Just as an isolated, gloved and masked public begins to emerge into the open. Just as we start to imagine we can put this behind us.

The medical community is dishing out a bit of 'tough love' and warning, with a clarity they've held back until now, that another round of Covid-19 is no more than a few months away.  Not "if" but "when." And history teaches us that the second round can eclipse the first in deaths and duration.


British Columbia's top doctor says that a second wave of COVID-19 caused by the novel coronavirus is inevitable in Canada, but that the lessons learned over the past few months will help inform future responses.

"The optimist in me would like to think that maybe it will go away, and the virus will mutate and won't become worse," said Provincial Health Officer Dr. Bonnie Henry in an interview with Matt Galloway, host of CBC Radio's The Current.

"But you know what? We've never had a pandemic in recorded history that has not had a second wave."

Henry, who was on the front lines of the country's SARS outbreak from 2002 to 2003, has led B.C.'s response to the coronavirus outbreak. She has been praised for her response to the pandemic that successfully flattened the curve ahead of many other regions.

We can do better next time.


With the potential for a second wave, Henry said B.C. is already considering what measures may return — without delivering another blow to the economy.

"What I hope we can do is create a level of safety so that we can get our economy going, our schools going, work going — but not to the level that we were in December [before the virus]," she said.\

"We'll be looking at what were the measures that worked best to prevent transmission, and if we start to see increases in COVID, those are the things that we can put in place rather than the blanket shut everything down as we did before."

If, as we're warned, the dreaded second wave could hit as early as September, what possible justification can there be for opening the Canada-US border for a month or two, especially when the US is doing such a lousy job protecting its own citizens from this virus? Then again, maybe we want to give that second wave a leg up, a little head start.

And the key to doing better next time than we did this time seems to be "contact tracing."


Typically when a new infection is registered, a hygiene inspector at the health office asks the infected person the following questions: how long have they had symptoms, where might they have been infected, have they been at work, with whom have they been in touch and in what way, and are school or nursery age children in the household?

Contacts are questioned and put into different categories by a team of at least a dozen staff, including doctors and containment scouts, and then quarantined. Contacts are not automatically tested, in order to avoid a negative result that could trigger a false sense of security, Canada, with its experience of being the only country outside Asia to have deaths in the Sars outbreak of 2003, was also quick to conduct tests and contact tracing. As of mid-May more than a million people had been tested for Covid-19, using a centralised network of laboratories.

Ontario and, especially Quebec, need to look at where they failed and prepare not to fail again.