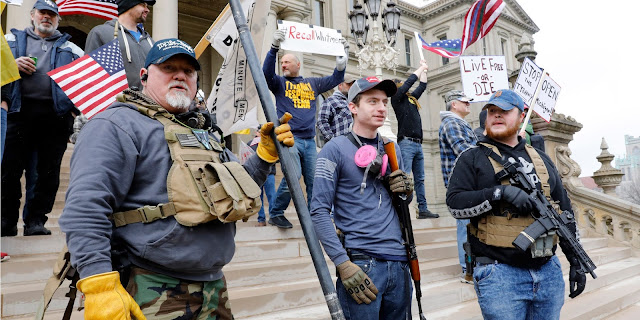 Donald Trump has forced us to see the bilious side of American society - the shamelessly racist, misogynistic,  xenophobic, fearful, angry, paranoid and downright stupid half of the public that today controls the Republican Party and keeps their president within striking distance of re-election.  Foot soldiers of a culture war they do not grasp is not on their side.

It was probably inevitable that, apparently motivated by provocateurs and twitter bots, the mob would  rise up in angry protests, some toting assault rifles as they stormed their State Houses.  The mob brought the culture war to the time of pandemic.


...pushback against the lockdowns was inevitable, even if there's good reason to believe these "grassroots" demonstrations have been concocted by well-funded conservative groups rather than grassroots organizers and have more than a touch of the Alex Jones-influenced evidence-free conspiracy paranoia.

What's striking is that this pro-Trump "liberty" movement is so stridently embracing deliberately disruptive protest and open defiance of the law.

Eager to keep the mob inflamed, the rightwing media cartel and twitter bots, Congressional Republicans, and the president himself stoked the embers with fabulous tales of the contagion being a hoax or a coup to topple the president or an attack on the mob's constitutional rights and liberties.

There followed angry confrontations when the mob's constitutional freedoms were purportedly impinged by stores requiring that customers wear masks. There were many cases of individuals retaliating by coughing on store staff and security guards. In one case a guard was shot in the head. 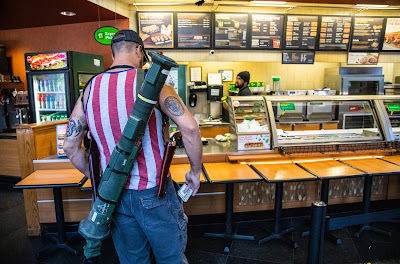 Now some merchants are embracing the culture war, refusing service to anyone who dares to show up wearing a mask.


In the last few weeks a spate of American stores have made headlines after putting up signs telling customers who wear masks they will be denied entry. On Thursday, Vice reported on a Kentucky convenience store that put up a sign reading: “NO Face Masks allowed in store. Lower your mask or go somewhere else. Stop listening to [Kentucky governor Andy] Beshear, he’s a dumbass.” ...Another sign was posted by a Californian construction store earlier this month encouraging hugs but not masks.

Anti-lockdown protesters have argued that it is anti-American for the government to curtail people’s freedoms in order to reduce deaths as a result of Covid-19. Meanwhile, store owners tell customers what they can and cannot wear before entering, and customers cough in the faces of workers in the name of freedom.

“A warped freedom obsession is killing us,” said the writer Anand Giridharadas, in reference to those coughing in the faces of others in the name of freedom. It is, of course, a minority of people willfully misinterpreting what freedom means – freedom to choose, until the choice is one that they do not like; meanwhile, most Americans don’t want to return to business as usual during this pandemic.

Is this a glimpse of what awaits when the next grave threat arrives to catch us once again unprepared?

How will the mob react when a second, potentially far more lethal, wave appears, perhaps as soon as this fall?  Will their already simmering anger boil over into something far worse than we're seeing now? 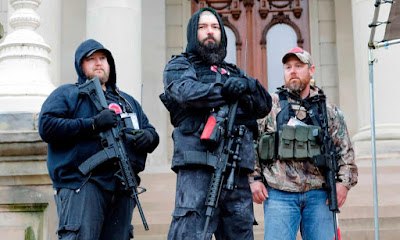 We know that Covid-19 won't be the last pandemic we'll experience. The science types have long warned us to prepare for a succession of these contagions and other equally jarring impacts such as food insecurity, climate breakdown and mass migrations.  They've been telling us that for years yet we got caught largely unprepared.

Everything I've read suggests this decade will show us the real face of climate breakdown. Once ignored as something that targets black and brown people in distant lands it will begin moving northward. Drought, sea level rise, heatwaves and severe storm events of increasing frequency, intensity and duration may introduce the US to the reality of IDPs or internally displaced populations that will have to be relocated to more livable regions. The ripple effects will be far-reaching.  Studies show that the Red States are more vulnerable than Blue State America. How will this play out in the context of a society already deeply fractured across so many fault lines, a population divided into camps hostile and suspicious of each other?  How will the heavily-armed mob react? 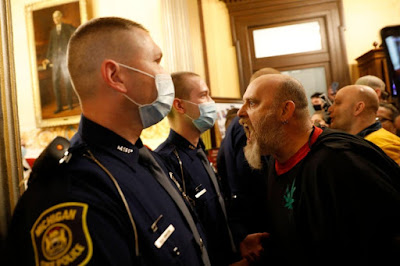 Here we are living next door to the most powerful nation on Earth yet one so poorly positioned to withstand what is coming.  A nation that cannot pull together even in the face of a pandemic. A nation in which a pandemic is just another convenient battlefield on which to wage their culture war.

British Columbia's media gem, the National Observer, has posted columnist, Linda Solomon Wood's interview with New York Times deputy editor,  Matt Purdy, about being on the front lines of  "a pitched battle for truth in the time of Covid."

How will the mob react when a second, potentially far more lethal, wave appears, perhaps as soon as this fall? Will their already simmering anger boil over into something far worse than we're seeing now?

The mob will rule.
Most others are just trying to pay the rent or mortgage.
Amazing what debt does to our views upon life!


Don't you think the mob might first morph into something more akin to an insurgency, TB? They already have a name for it, "boogaloo." America may be facing severe instability but I doubt the loons have enough organized force to launch a civil war. Not when they would have to win over the most powerful military on the planet, its members all duly sworn to defend the nation and the Constitution against all threats "foreign and domestic"?

I doubt the loons have enough organized force to launch a civil war.

Perhaps not but they can create havoc as Bundy did.

https://en.wikipedia.org/wiki/Bundy_standoff
Nothing worse than idle hands, with a trigger finger!

No wonder they're pissed off and don't trust the US government. For Christ's sake a rogue agency did a controlled demolition to blow up the WTC on 9/11 to drum up support for Zionist wars in the middle east.

Unless you believe those two little planes took out those buildings and jet fuel can melt steel. A third tower also fell, Building 7, which no plane ever hit.

This is the same "government" that had JFK murdered.


Really, Anon? I mean, really? 9/11 was a setup, one that would have involved a thousand plotters, probably more, and yet the one nation that can never keep a secret, the United States, has not had one of those schemers, in a bout of screaming conscience, spill the beans?

Your illogic is breathtaking.

So how did Building 7 come down?