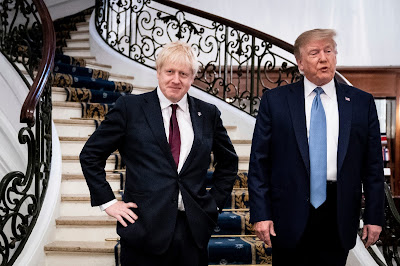 
Last year, the Global Health Security Index ranked this nation second in the world for pandemic readiness, while the US was first. Broadly speaking, in both nations the necessary systems were in place. Our governments chose not to use them.

The climate modeller James Annan has used his analytical methods to show what would have happened if the UK government had imposed its lockdown a week earlier. Starting it on 16 March, rather than 23 March, his modelling suggests, would by now have saved around 30,000 lives, reducing the rate of illness and death from coronavirus roughly by a factor of five.

But even 16 March would have been extraordinarily late. We now know that government ministers were told on 11 February that the virus could be catastrophic, and decisive action was urgently required. Instead, Boris Johnson told us to wash our hands and “go about our normal daily lives”.

Had the government acted in February, we can hazard a guess about what the result would have been, as the world has conducted a clear controlled experiment: weighing South Korea, Taiwan and New Zealand against the UK, the US and Brazil. South Korea did everything the UK government could have done, but refused to implement. Its death toll so far: 263. It still has an occasional cluster of infection, which it promptly contains. By contrast, the entire UK is now a cluster of infection.

The proof is indeed in the pudding for every government. Trump deliberately dismantled the pandemic response team bequeathed to him by Barack Obama. Some estimate that act of resentment has already cost the lives of upwards of 60,000 Americans. Needless deaths. Monbiot pins 30,000 needless deaths on the negligence of Boris Johnson.


In other words, none of these are failures of knowledge or capacity. They are de-preparations, conscious decisions not to act. They start to become explicable only when we recognise what they have in common: a refusal to frontload the costs. This refusal is common in countries whose governments fetishise what we call “the market”: the euphemism we use for the power of money.

Johnson’s government, like that of Donald Trump and Jair Bolsonaro, represents a particular kind of economic interest. For years politicians of their stripe have been in conflict with people who perform useful services: nurses, teachers, care workers and the other low-paid people who keep our lives ticking, whose attempts to organise and secure better pay and conditions are demonised by ministers and in the media.

This political conflict is always fought on behalf of the same group: those who extract wealth. The war against utility is necessary if you want to privatise public services, granting lucrative monopolies or fire sales of public assets to friends in the private sector. It’s necessary if you want to hold down public sector pay and the minimum wage, cutting taxes and bills for the same funders and lobbyists. It is necessary if corporations are to be allowed to outsource and offshore their workforces, and wealthy people can offshore their income and assets.

The interests of wealth extractors are, by definition, short term. They divert money that might otherwise have been used for investment into dividends and share buybacks. They dump costs that corporations should legitimately bear on to society in general, in the form of pollution (the car and road lobbies) or public health disasters (soft drinks and junk food producers). [In Canada, think 'orphan wells' and Tar Sands tailing ponds] They siphon money out of an enterprise or a nation as quickly as possible, before the tax authorities, regulators or legislators catch up.

Governments designed to fail their people.


Years of experience have shown that it is much cheaper to make political donations, employ lobbyists and invest in public relations than to change lucrative but harmful commercial policies. ...Thanks in large part to their influence, we have governments that fail to protect the public interest, by design. This is the tunnel. This is why the exits are closed. This is why we will struggle to emerge.

What we're seeing today is the real face of the neoliberal order and it's not confined to the UK or the United States. It's everywhere and it works for special interests ahead of the public interest, sometimes with lethal consequences. Justin Trudeau may come across as an eminently likeable, compassionate guy but he's a devout neoliberal. It was his handpicked finance minister who was sent out to tell Canadians that theirs would be a future of "job churn," life in the gig economy, the precariat, the same path that has left an alarming segment of working class America impoverished, unable to cover even a $400 emergency.  It is a toxic political-economic ideology built on a foundation of increasingly unstable supply chains, 'just in time' planning and, for too many people, no way forward.

A few days ago I wrote that if we don't unhorse neoliberalism there may be no future and that, if we are to fight back, we have to recognize how widespread and deeply embedded neoliberalism has become in our political institutions.


That would mean, at a minimum, driving out the neoliberals, the real disease that has sapped our strength - economic, social and political - since Thatcher, Reagan and, yes, Mulroney foisted it on us four decades ago. It will be these same neoliberals, regardless of party badging, who will steer us into the post-Covid world imagined by Galbraith and Harari and many others. Think of it as neoliberalism on steroids, neoliberalism weaponized. Think crippling inequality. Think of the decline of liberal democracy and the rise of oligarchy. Then think about stopping it while we can.

We are now counting the costs -- not in dollars and cents -- but in lives, Mound. You would think that would motivate us to act.

Too few of us, Owen, have grasped the nexus between neoliberalism and a host of bad outcomes - political, economic and social. The damage has been deeper, more pervasive than we have allowed ourselves to imagine. I hope these tens of thousands of lives sacrificed have not been in vain.

So Americans are dying at a rate only 50% higher than Canadians per capita, despite being out to lunch on virus response and re-opening early. And we think we're so wonderful here. China has 60 times the population of Canada yet fewer deaths, so no wonder they told kenney to talk a long walk off a short pier when he attacked them and said that it's all China's fault, regardless of actual facts, to which nobody is yet privy to my knowledge. Speculation only, but turned into "fact" by the US and Canadian and British and Australian right wing.

It's the same kind of line of hokum rubbish that went with claims Russia influenced US elections, which has never been proven, despite all the toe-clutching hope Canadian progressives have evinced that Trump was in on it. A man who cannot even plan the next day yet with apparently the ability to long term strategically plan a coup. Right. Russiagate's just been repeated ad infinitum so it's now part of the accepted scenery, an advertising technique proven to change minds and perception whether true or not. The US Democratic party is at least as corrupt as the Repugs, and canned Sanders yet again. Now Obama the drone king emerges and puts in his two-cents worth - entertaining to listen to someone who can actually speak, but that is no guarantee of truth. Rotten to their core and beholden to money, the whole lot of federal American pols.

Trudeau up on his hind legs today at his daily dog and pony show backing Keystone XL, what a load of old trash, and repeating the lie that Maduro of Venezuela is a dictator. Christ Almighty, how many times does it have to be said Jimmy Carter attended the last Venezuelan election and declared it better run than US elections. Maduro won. The neoliberal middle class lost and they're the ones including many abroad who previously jumped ship, pushing the dictator-line horseshit. The same as Cubans in Florida dunned Castro for decades. It's all about losing their businesses after milking the indigenous poorer classes for decades, and Canadian banks and mining companies trying to protect their investments in Venezuela. But Freeland and JT did get Bolivia taken down, to their everlasting shame. So all that screed of Global Affairs-manufactured nonsense breeds a lying PM, pure and simple. A man of zero integrity, shown up today yet again for the idiot he truly is on many fronts.

The big guys still run Canada, no hope of change.

Meanwhile Trump glugs zinc solution and gags on synthetic quinine tablets to ward off the virus. That's all the orange dope and his US sychophants have left to tout - magic.

Kenney forgets the huge Chinese investment, public and private, in Alberta's oil and gas sector and runs off at the mouth like the ideologue he is. And meanwhile, I'm not quite sure what to make of the the Canadian "progressive" blogosphere. Haven't been for some time for that matter. Seems to be a position of hope rather than substance, and definitely not influenced from reading Canadian Dimension, available for your delectation right here on Prog Blog, but disregarded entirely apparently in favour of the NYT, the US's self-claiming official record of edited horseshit revisionist Democratic party history. The Guardian has been waking up recently, after several years of shooing away its best reporters, because now even Freedland the editor can't stomach Boris the Bozo disaster, despite having stuck the knife into Corbyn with relish last fall.

And the EU shows its true mettle by letting Orban go off on an autocratic rant while clucking like hens and looking the other way.

I'm pretty much losing hope all around at this stage.

Feeling a bit out of sorts, BM? Don't worry. You're in good company.

Seems to be a position of hope rather than substance, and definitely not influenced from reading Canadian Dimension,,,,,,,,,,

Too true, but what is the remedy?

People vote with their dollar seldom their conscience.

eg; Shoppers have stopped crossing the line ( ok they were stopped from doing so)because of fears of Covid19.
I will be interested to see what happens when the border reopens.

So far Canada is holding up quite well but we have the geography to help!

It is true , I think, that the future will look with sadness upon our 2020 society( the one Maggie Thatcher said did not exist) because what we have now shows NO sign of being replaced by something better.
Business( bailed out that is) as usual is just around the corner.

TB, if progressive democracy is extinguished, and it may well be, it will be our complacency that makes it possible.

I don't understand your reference to Canadian Dimension. Can you explain?

If we lose what remains to us in 2020, it may conclude the transition from a failing democracy to outright oligarchy in some form of modern feudalism. So much power - political, economic, even social - is being harvested from us, like the layers of an onion. Perhaps that's a common fate that befalls those who have too much that they never had to fight for. It might bear a resemblance to the rise and fall of the T. Eaton company. What the grandfather built, the grandchildren ran into the ground.

I don't know where you got that idea, Anon. Sale of his books is banned - in Iran. It appears the Mullahs take exception to Harari, complaining that he endorses evolution over creationism. I suppose, if it wasn't for that pesky 1st Amendment, there would be plenty of US States that would love to burn Harari's books on the same grounds.