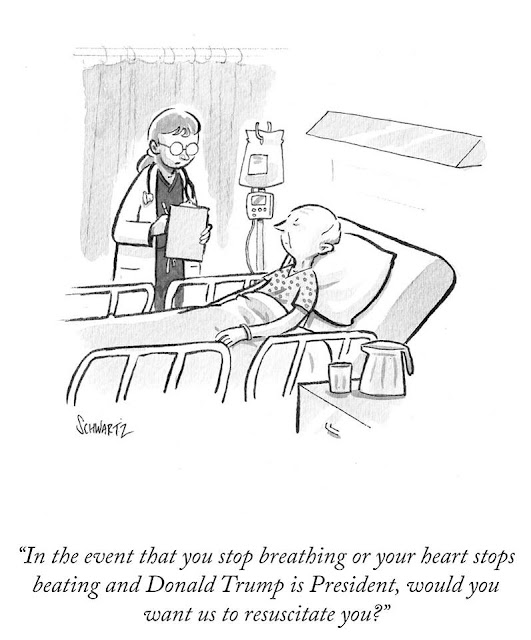 Last week I wrote a post slamming Donald Trump for his persistent refusal to wear a facemask in public. What made it egregious was that a president is supposed to set an example for his people. He's their role model. His conduct was failing the American people.

As Maureen Dowd argues in today's New York Times, unmasked Trump is setting an example. He is a role model.


While you know Barack Obama would have been all about the mask, showing the nation the proper example, Trump is afraid his followers will think he’s a wimp if he wears it, that he’s conceding the danger of a pandemic many in MAGA-land think is exaggerated or some sort of hoax.

The mask should be a medical signal, not a political one. But Trump rejects the mask because of a misbegotten image of masculinity and power. In denying the mask, he denies reality, science and the fact that the country is in a crouch. Trump has proved that people wearing a mask can present more truth than people not wearing a mask.

Trump said he had been wearing a mask - in the back as he was shown Ford's collection of GT-40s. He claims he took it off so the press wouldn't have the 'pleasure' of seeing him masked. The truth is this had little to do with the White House press corps.

Trump was setting an example, the unmasked, defiant spectacle his base wants to see. He is a role model - for his lunatic fringe and a nation whose arteries are plugged with conspiracy theorists. Trump doesn't serve the American people. He serves just some of them.

Astonishing statement of the week.. Trump trashes a study of 'hydro'.. which is about all he can remember of the drug he purportedly takes. Something edifying about they were ready to die anyway.. so 'what me worry' ..

FUBAR, Sal. I sometimes think FUBAR was conceived with Trump in mind.