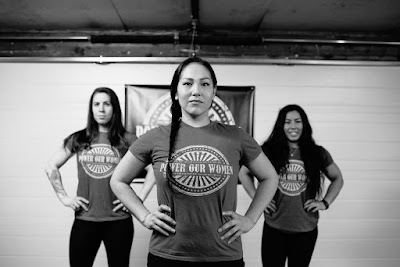 Indigenous women get it. They're learning martial arts, determined not to become just another statistic.


Five women have gone missing in Lisa Kenoras’ community in the past five years.

Kenoras was raised in a community of 6,000 people on unceded Secwepemc land in the Shuswap-North Okanagan region of B.C. Five women, both Indigenous and non-Indigenous, have gone missing in her community in the past five years. They include Caitlin Potts; Ashley Simpson; Nicole Bell; Deanna Wertz; and Traci Genereaux, an 18-year-old whose remains were found by police in 2017.

Instead, she decided to fight back.

Kenoras attended a self-defence workshop in Lkwungen territories, in Victoria in February. The workshop was led by Shana Pasapa, a jiu-jitsu purple belt from the White Bear Nation in southeastern Saskatchewan. Pasapa teaches practical self-defense and situational awareness to Indigenous women and girls through Power Our Women (POW), a group she founded to address the Missing and Murdered Indigenous Women (MMIWG) crisis.

"I left home when I was 16 and ended up in a five-year abusive relationship,” Kenoras said.

After escaping her abusive relationship, she worked as a hairdresser and then as a dishwasher in man camps across Alberta and B.C., where she said she regularly experienced harassment.

“In those man camps, I was isolated. I was the only young Indigenous female in a lot of places. I would have men follow me, trying to offer me alcohol and drugs or follow me to the gym,” she said.

“The man camps just fed into my trauma.”

Kenoras, now studying at the University of Victoria, found strength in reconnecting to her culture and advocating for missing Indigenous women. After the POW workshop, she reflected on how the skills she attained could have helped her avoid the harmful situations she experienced as a young woman.

“If I grew up with this, maybe some things wouldn’t have happened. Maybe it would have helped train my mind and made me more aware of my reality. Maybe I wouldn’t have stayed in the five-year abusive relationship I was in,” she said.

Being able to defend yourself against sexual harassment or sexual assault is always a good thing. lets hope more bands encourage their young women to train.