Boris Says "Back to Work"


Boris Johnson wants Britain's economy back up and running.  He says he'd prefer those who can work at home stay there but those who can't should return to work albeit with social distancing still in effect. 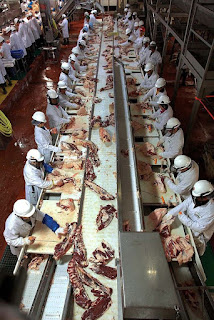 Floor space is money. Factories, warehouses are designed to maximize operations and minimize costs.  Physical distancing was not a consideration in their design.

Aircraft, in this era of 'Cattle Class' air transport, are also ill-suited to physical distancing. I watched a European airline pilot show what social distancing would mean for a modern jetliner. It would mean only one seat out of six could be filled. When airlines need 75 percent capacity to break even, physical distancing means staying grounded.

But what about London, a mega-city that depends heavily on public transit - buses, trains, subways.  The Guardian has posted an interactive look at what that would mean for commuters in Clapham. This photo of pre- and post-pandemic speaks volumes. 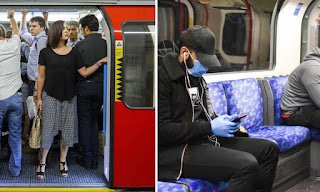 Between 8 and 9am on a normal weekday, 1,005 people press into Clapham North station and get on a train to the centre of London. With 24 trains a hour, an average of 42 get on each train.

But if social distancing means that commuters can only sit on alternate seats, and no-one is allowed to stand – by our calculations, only 10% of the people who would normally get a train from this station will be able to board one.

In that scenario, only four people instead of 42 will be able to get on each train. Meaning a total of 96 an hour can leave the station.

If everyone tried to resume their morning commute, this would leave 909 people waiting outside Clapham North station. The resulting 1.8km queue (leaving 2m between each would-be commuter) would stretch back almost two stops to Clapham South.

Solutions will have to be found. Perhaps work will have to decentralize, something more akin to life before 20th century urbanization.  A renaissance for the faltering High Street perhaps?