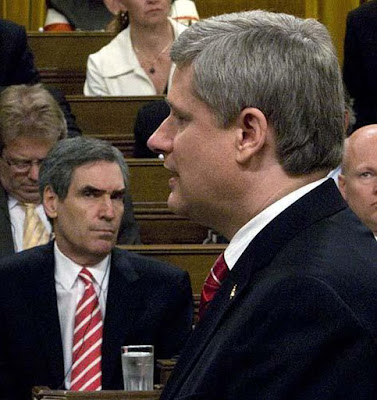 When Stephen Harper began popping up in the news again I felt like an abused dog finding itself crossing paths with his evil former master.

Give him his due, Sideshow Steve can still set stomachs a'churning. He's just that kind of nasty and he makes it obvious that he'll never run out of arrogance.


Did Harper really carve out an inspiring new vision for 21st century Canadian Conservatism, or did he simply dominate through fear?

Did he just enforce enough party unity to score an electoral fluke during a period of national political flux?

A generation of former cabinet ministers has come and gone since Harper governed. In that time, the right’s energy and narrative has been seized by Trumpian ideologues schooled by Roger Stone and Breitbart.

Harper is wise enough to understand that brand doesn’t translate in Canada, but now that the fear is gone, what remains of his own? The CPC, virtually shut out of Quebec and the 905, is largely reduced to a regional Prairie party.

From the wings, Stephen Harper may still control his chastened party, but Canadians have moved on.

Power may be enigmatic and mercurial, but you know it's finally over when the laughter is following you out the door.

from the clip that Sandy is referencing:


I'm sure all the attention is orgasmic bliss to Harper.

The reports on long term care may just hit Slithery Steve where it hurts the most: at the convergence of Rand, Thatcher and Reagan. Advocating for privatized medicine and cancelling Medicare will be tough for a while.


He was the harbinger of Trump, Rumley. When the 2007/2008 Great Recession hit, Harper took no responsibility for his efforts to deregulate banks. His denial was that 'no one saw it coming.' That, of course, was bullshit. All sorts of economists were warning it was coming for many years before it hit. Krugman even put together his book, "The Great Unraveling" in, I believe, 2003. Stiglitz was also writing about the dangerous instability in the market economy.

When Calgary flooded in 2013, Harper and his Alberta counterparts again said that no one saw it coming when, in fact, following the previous once-in-a-century flood five years earlier, the Alberta government was warned that much of the city was dangerously flood prone. The province and the city vowed to deal with it but then decided there were better places to spend that money and went back to sleep.

When Harper deregulated the meat packing plants and listeria broke out claiming some 50+ Canadian lives again it was the see no evil, hear no evil, speak no evil excuses despite the clear warnings this was likely to happen.

These right wing scumbags keep showing their true colours but too many of us ignore their costly lessons.

.. big fan of Ms Garrosino here.. & her Twitter efforts held in high regard..
What seems missing though.. (and my views on Harper 'seamanship' .. slimy hand on the tiller are well known..) is what destructive candidates and enablers infected Canadian society as a result of his scumbaggery. I don't need to rehash the litany of names. Its quite astonishing, the numbers, the actions, events, deceits,. cheats

In many ways Harper was a forerunner of Trump. But where Trump Inc is so overtly toxic.. Harper Inc was and is, more insidious. Both are having profound dangerous impact.. not just on society & justice, but on culture. Due to the size & scale of America's population its quite obvious. Whereas Canada is the proverbial mouse sleeping with an elephant.

But I don't care (thanks Melania !) My concern is with the mice. I still laugh in delight with thoughts of Farley Mowat.. and Never Cry Wolf. It was the mice that bedevilled ol Farley.. not the mighty wolf ! Anyone who understands 'Orca' must understand the wild salmon. and anyone trying to understand where in hell the wild salmon have gone must understand the tiny herring.. To know the great white bear, one must know seals.. and so on.. what do seals eat ? Haha..

We need to hunker down low in the disturbed eco chain of scumbags Mound.. to understand Harper's toxic ''legacy' (Legacy means 'gift')