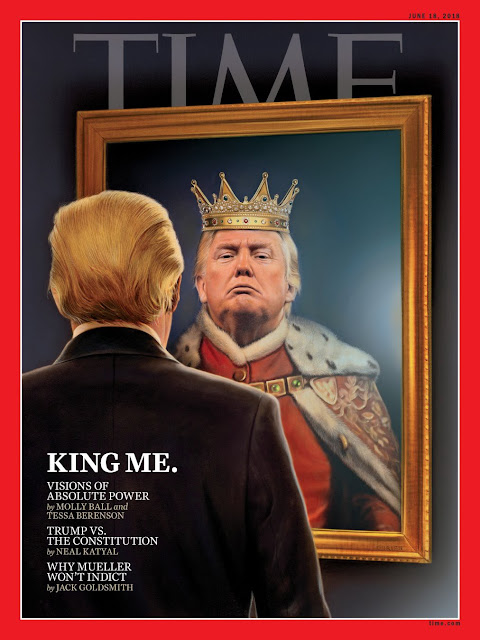 Donald Trump is a showman. So he donates his $400,000 annual salary and regularly reminds us of his generosity.

What he doesn't mention is how he has turned Washington and the federal government into his personal money machine.

Prospect.org has produced an interactive look at how Trump and his gang have milked most federal departments and the depth of his corruption since he took the reins of power.

This is Tammany Hall scale graft by the world's most powerful grifter.

Ultimately Trump is just the culmination of a rot that spread through Washington for decades. It began with legislative "capture" when the McCain/Feingold "Hail Mary" attempt at campaign finance reform was crushed. This ensured that big money donors would control Congressmen and Senators who need huge campaign budgets to win and keep their seats.

Once the legislators were beholden to big donors they were as powerless as a guy who can't pay back his loan shark. This happened at both federal and state levels. It spawned ALEC, the American Legislative Exchange Council, where the "bought and paid for" are invited to attend an annual information session at which the donors' lobbyists hand them pre-drafted legislation that they're expected to introduce and pass. That's corruption.

I recall watching a clip of then Republican House Leader John Boehner strolling the aisles in the House dropping white envelopes here and there. It later emerged that was just before the House vote on that year's tobacco industry subsidies. The cheques were campaign contributions from tobacco industry lobbyists.  One GOP Congressman, now long gone, denounced this as outright graft. According to Boehner it wasn't strictly illegal but he conceded it looked bad. That's corruption.

The next step was regulatory "capture." This is where the boards of regulatory tribunals are stacked with individuals from the regulated industries themselves. Without so much as a 'by your leave' the regulated become the regulators. In Canada we did that with our National Energy Board. That's corruption.

Trump has ushered in judicial capture, deliberately stacking federal courts, including the US Supreme Court, with judges chosen for their political bias and reliability. This rapidly puts paid to judicial independence and equality before the law. It creates a judiciary in service to one side and not everyone. The Republicans have been pressuring older judges to retire so they can be replaced with really young guys who will ensure justice in America will be bent for decades to come. That, too, is corruption.

The United States government is being transformed into a perpetual Republican bastion for America's white population that so deeply fears the demographic rise of non-white voters. It is why they'll defend the Electoral College to their last breath. It works - for them. Voting against their own interest is a reasonable price to pay so long as the Senate and state houses remain a bastion of white privilege. Look at how the Republican Senate managed to thwart just about every legislative initiative Obama tried to introduce. Many who criticize Obama for achieving so little forget how he was hamstrung by McConnell and his cronies. It was said that, if Obama really wanted bipartisan support for anything, it would have to be the repeal of the 14th Amendment, the abolition of slavery.

Trump, with the collaboration of a hopelessly corrupt Congress, has neutered America's vaunted system of "checks and balances." Every branch of government - executive, legislative and judicial - has been corrupted.

This looks eerily like the final century of Rome and its empire. Rome succumbed to transactional governance. It lost the confidence and support of the citizens who suffered enormously as their Senators came to own most of the arable land and used slaves to displace ordinary Romans causing their impoverishment and suffering.

The connection between those that governed and those whom they governed was irreparably broken. SPQR lost all meaning as the legitimacy of the state faltered. The big difference is that what took Rome a couple of centuries is unfolding in the United States over a span of a few decades.  And it's all playing out before our own eyes.
Posted by The Mound of Sound at 1:19 PM

I never understood the USA it always seemed surreal.
At the same time it was enticing with visions of grandeur far fetched from my youth of aspiring to a better council house or golly gosh a Morris Minor!

Such is the separation between the USA and the rest of the world.
After WWII mainland Europe caught up somewhat and despite it's shortcomings the EU has been a success mainly as a market force to challenge the USA.

Now the USA has gone from a success based upon unrealistic demands to a nation built upon a lie.
The lie started some years ago but the trailer park USA still cannot see it and displays the stars and stripes on every conceivable object.

Trump is the acme of out of touch American desire.

It's time to distance ourselves from it.

I agree with your conclusion, TB. I don't think we have the strength or courage to do it.

"Trump, with the collaboration of a hopelessly corrupt Congress, has neutered America's vaunted system of "checks and balances." Every branch of government - executive, legislative and judicial - has been corrupted."

Why give tRump all this credit? He is simply a Rethuglican w/o the manners.

Weel, it has been a long journey but now at least we've reach the 5th stage of grief.

NPoV, I believe I presented Trump as the culmination of a degenerative process that's been underway for some time now. Yet, as that interactive web page demonstrates, Trump and his team have presided over the dismantling of America's system of checks and balances.

"America's system of checks and balances."

always a myth at the best of times ;-)

Funny, the American gov't works better in theory than practice while the antiquated constitutional monarchy to its north does the opposite.