One for the Books. Elon Musk's Crew Dragon Set to Fly Today. 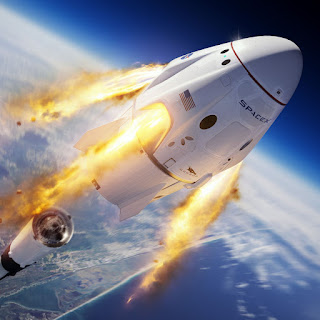 UPDATE - Launch scrubbed. Weather problems at the launch site caused the launch to be delayed. The next opportunity will be the end of May.

I remember the flight of Yuri Gagarin. I remember the suborbital flight of Alan Shepard and the three-looper of John Glenn.  I grew up devouring the progress of the Mercury, Gemini and Apollo space programmes that culminated with Neil Armstrong's first steps on the moon.

Back then we knew their names. Each was a hero. Some of that was lost as we moved on to orbital flight, the space shuttle and the International Space Station. Chances are if you're thinking of the space shuttle astronauts you'll remember someone who died, someone like Sally Ride.

Today, however, a bit of that earlier spark may reignite, for a short while anyway, as two NASA astronauts attempt to pilot the Space-X Dragon manned vehicle to a rendezvous with the International Space Station.

This could herald a new era in space exploration, perhaps the colonization of the moon.

If the weather doesn't deteriorate, you can watch the Falcon-Dragon launch online. Pre-launch programming will begin in about half an hour, 12-noon, eastern time. Liftoff is scheduled for 4:33 EDT.

Wait a second. The Dragon crew are Bob and Doug. 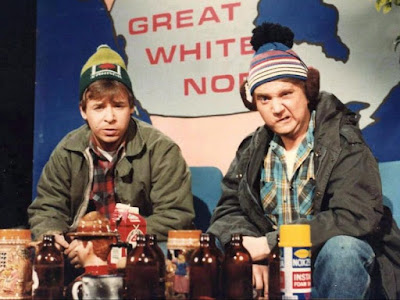 The day Armstrong landed on the moon, Mound, the Vancouver Sun's front page edition had "THE MOON" instead of the normal one. I kept that edition and still have it today -- carted it all over BC in our man job-related moves.

I've always been a History buff, and this event sure ranked up there as a really important one (in my mind, anyhow).

Thanks for reminding us the old USA had some interesting accomplishments in their hayday -- now all they have is Trump!

Hi, Lulymay. It was a fascinating time to be young, wasn't it? Space travel was new and exciting. I met Dr. Harrison Schmitt in Ottawa in the early 70s when he showed up to promote the Canadian Space Agency. He was the only civilian (a geologist) and the last American to walk on the moon. lHe flew on Apollo 17.

Schmitt said that Neil Armstrong was a big hero but, by the time his mission rolled around, many Americans had tuned out. The public was bored and the networks didn't show much interest in the final Apollo missions.

Later, Schmitt became a Senator and a real right-wing loon.

Fascinating that individuals have the wealth to do what nations have!

One of those iconic, never to be forgotten, images of early aviation is Bleriot's monoplane flying just 20 or 30 feet above awestruck country folks below. Artists often depicted Bleriot's monoplane cavorting near Montgolfier's elaborate balloons. Probably still do.

I hope the Crew Dragon flies on Saturday. Boeing's contender, in keeping with that firm's spate of technical and engineering glitches, is beset with software gremlins. If I had to chose I think I'd prefer to fly with Team Musk.