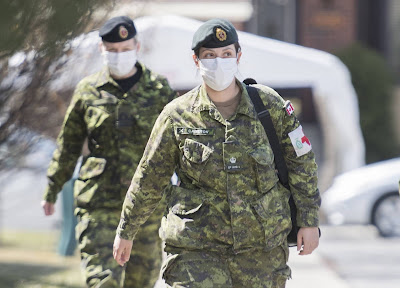 Soldiers are supposed to be pretty tough but they weren't prepared for what they witnessed when sent in to assist at Canadian nursing homes.

Trudeau did not detail the incidents reported by the CAF members. Two military sources tell CBC's Vassy Kapelos that military members deployed to the facilities found instances of severe neglect.

"We are going to ask the province to investigate the instances of neglect and do something about it," said one source. "We found no rules, a lack of staff training and medical equipment and instances of staff reusing syringes on seniors."

"Members witnessed people dying and not being taken care of adequately and felt compelled to put it in writing," said a second source.

The prime minister appeared genuinely troubled at what, in reality, is the worst-kept secret in Canadian healthcare - our disgusting nursing homes.

When I got my first reporting job in Ottawa in the early 70s, three seniors committed suicide in the course of one week. They were all men. They had all just been taken from their own homes, their independent lives, and consigned to the custody of nursing homes. They all found ways to end their lives with overdoses. Two swallowed massive amounts of over-the-counter aspirin which is not a very pleasant way to go.

I tracked down a psychiatrist who was on contract to assist nursing home inmates. He was very helpful as he described the enormous trauma the elderly can experience in this transition. He said he couldn't handle the needs of so many people at so many nursing homes all by himself and too many were left to fend for themselves. He painted a grim picture. I came to think of these people as prisoners, inmates.

I got a PR type to send me copies of Ontario's Extended Care Nursing Home Act and regulations. It struck me that even a home that met the provincial standards wasn't doing those inmates any favours.,

That made me wonder how the conditions in nursing homes compared to other custodial institutions. I contacted the Canadian Penitentiary Service and they sent me copies of their regulations governing physical and mental healthcare, recreation and such. I reached out to National Defence Headquarters and they sent copies of the relevant provisions of the Geneva Conventions pertaining to the treatment of prisoners of war.

It's hard to remember the particulars almost 50 years on but I do recall my conclusions. Were we to treat a prisoner of war in the standards prescribed for Ontario nursing homes we might have been liable under the Geneva Conventions. The levels of neglect could arguably be considered war crimes.

Then I found that we provided vastly better care to our penitentiary inmates than to our elderly. Inmates get occupational training, rehabilitation programmes, access to medical care and basic hygiene.

While I was putting this story together I snuck into a couple of nursing homes the psychologist described as really bad and were they ever.  They were dirty, filthy and, yes, I found "residents left in dirty diapers or left unbathed for weeks." Those who had no family that could speak for them or who had no family, they definitely got the worst of it. It was stressful when I spoke with some of them at their bedsides and they begged for help. Here we are almost half a century later and it seems little has changed.

I wrote a three-part series. Yes, Queen's Park said they were on this and would be announcing reforms soon. Right. I ended with a an idea that I had trouble shaking. Might it not be better, faced with consignment to the gulag, to just shoot somebody - a flesh wound would do it - and then, at trial, tell the judge to throw the book at you because otherwise if you got turfed out of prison you might have to do it all over again.

I'm glad that Justin Trudeau feels anger and sadness, frustration and grief.  I'm angry that it took a murderous pandemic to expose the worst kept secret in Canadian healthcare. And I think we owe a special thanks to those soldiers, our uniformed whistleblowers, more than 20 of which have contracted Covid-19 in those nursing pits.

There are two problems. Privately owned homes see seniors as profit centres. Giving them fewer services increases the profit. We as a society are not prepared to contribute our fair share for proper care.

When this all dies down we will be sorely tempted to close our eyes , ears and minds and opt for lower taxes. Our Any Randish pundits at the Sun and the last post are already bleating that public services will have to be drastically cut and soon.

.. Oh Canada' ..
The anthem should actually stand for something ..


We are at a moment, Rumley, when we'll have to decide what sort of Canada we want. Harper has resurfaced, beating the drum for severe austerity and the media have responded faithfully. To them there is no struggle between capital and labour and no circumstance in which capital should not prevail. Harper studied neoclassical economics. He knows nothing else. A lot of people fail to grasp it's Harper's neoliberalism at the root of many of today's problems.

. Oh Canada' ..
The anthem should actually stand for something ..

The Oh in Oh Canada has become a signal of exasperation!

You would think someone from the Liberals and the Ontario PC,’s would have taken a little gander for themselves. Anyong

I can't imagine anyone can dispute your point, Lungta.

Anyong, they have a Ministry of Long-Term Care. This has been going on for decades under several PC, Liberal and even one NDP government. There's a reason this has gone on so long. There's a reason it took Canadian soldiers to recoil in disgust and make this an issue. It's graft.