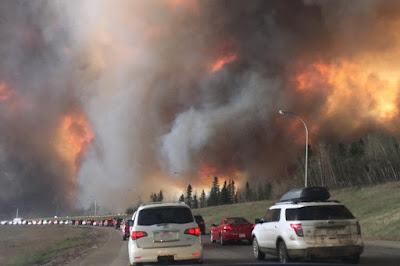 When  I studied journalism I was taught that the hallmark of a hack reporter was ending a TV or radio report with "only time will tell."  Except that's all you can say about this year's forest fire predictions for western North America.

Ottawa tells us it's going to be an above average fire season. Local authorities say they're not so sure. A really wet June could make all the difference as it did last year. A dry and hot start to summer and it'll be "burn baby, burn."

Let's pray for rain because this is not the year for forest firefighting. Not with Covid-19.


Even during a normal wildfire season on the West Coast, the life of a wildland firefighter is brutal. They’re digging trenches by hand to create fire breaks, breathing smoke, and baking in unrelenting heat. And now the region prepares to face a fire season like no other, as the COVID-19 pandemic has brought with it a logistical nightmare: How do you mobilize an army of first responders while keeping them socially distanced, while also preparing for the possibility of having to evacuate whole communities to safety?

“If you look at a fire engine going down the street, there’s four personnel inside who technically are not socially distanced,” says Mike Mohler, deputy director of the California Department of Forestry and Fire Protection, also known as Cal Fire. “But when we look at a large wildland fire, our base camp operation can hold sometimes up to 6,000 personnel.”

Included among them are of course the firefighters streaming in and out from the wildfire’s front lines.  ...Private vendors are also coming in and out, delivering and maintaining trailers and portable toilets. And that’s not to mention the government officials who are coordinating the response and journalists covering the story. All of them have to be socially distanced, when possible. After all, paramedics and police may have already been exposed to the virus in their day-to-day work, and may not be showing symptoms. An outbreak at a base camp could easily hobble the fight against a wildfire, which may last for weeks.

Even with all the prep work in place—all the controlled burns and logistical tweaks to account for COVID-19—agencies have to prepare for the possibility of mass displacement during a wildfire, like what happened when the people of Paradise fled to neighboring communities. This year, the timing here could be terrible, as epidemiologists predict that a second wave of COVID-19 could land in the fall, the very time when California’s wildfires are at their most vicious. This itself is a consequence of additional terrible timing: Every autumn, seasonal winds whip through the state. That isn’t much of a problem if the first rains have already come, but thanks to climate change, those rains are arriving later and later in the year. It takes a mere spark to ignite brush that’s been drying out all summer, as walls of flame ride on 50-mile-an-hour winds.

Wildfires also mean smoke inhalation. A lot of  PM 2.5 particulates that, when inhaled, can embed into tissues, especially lungs.  A compromised pulmonary system can increase the lethality of Covid-19. We will need better protection not only for firefighting crews but even people in smoke-blanketed cities that may be hundreds of miles from the nearest widlfire.

It's a lot more challenging to evacuate a town such as Fort Mac when you have to find a Covid-safe place to house the evacuees.  You can't just toss people into a community centre full of cots.  And then there's another factor, fallout from the Covid lockdown - burnout.


Another tricky sociological factor is known as crisis fatigue. It’s that sense of burnout you’re probably feeling in the midst of the coronavirus pandemic—perhaps you’ve grown distrustful of politicians or just tired of hearing about the emergency. Californians can develop the same fatigue about wildfires, that constant vigilance waiting for the next big blaze. “We are so used to going through ups and downs, especially in this state, with earthquakes, floods, and fires,” says Mohler. “I mean, we get the crap kicked out of us. But now you add Covid. And let’s say we issue an evacuation warning. Are people going to be like, Oh my God, here we go again?”

If we do get the wildfire season Ottawa has predicted, it's going to be a tough year requiring firefighters and relief workers to cope with extraordinary challenges.  Time, as they say, will tell.