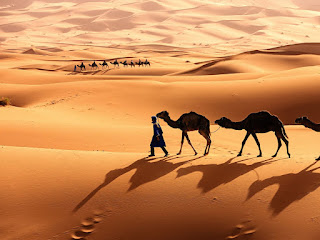 Another study confirms that global heating is coming and, for billions of us, it will be unbearable. That's billions, with a 'B'.

As our planet heads toward 3 degrees Celsius of warming, a conservative estimate, in more equatorial zones, the vast center belt of the planet, temperatures will soar an unlivable 7.5 C, as hot as the most scorched parts of the Sahara Desert.

Humanity is particularly sensitive because we are concentrated on land – which is warming faster than the oceans – and because most future population growth will be in already hot regions of Africa and Asia. As a result of these demographic factors, the average human will experience a temperature increase of 7.5C when global temperatures reach 3C, which is forecast towards the end of this century.

At that level, about 30% of the world’s population would live in extreme heat – defined as an average temperature of 29C (84F). These conditions are extremely rare outside the most scorched parts of the Sahara, but with global heating of 3C they are projected to envelop 1.2 billion people in India, 485 million in Nigeria and more than 100 million in each of Pakistan, Indonesia and Sudan.

Long before these areas see 7.5 C, they'll become uninhabitable. Most of them are agrarian societies that require many people to work outside in the sun and heat. In countries that are already food insecure these productivity losses will be devastating: ilo.org, phs.org, unu.edu.  Workers lose their ability to perform for part, if not much of the standard workday. Animals suffer from exposure to such heat. Crops wither. It's devastation that renders regions uninhabitable. These also tend to be the poorest regions where climate control - air conditioning - is unaffordable. That's not going to get better as they lose their economies.

There are always wild cards in these reports. One is timing. Since climate change studies began to flood in, one after another have been unduly optimistic. Changes we were warned might be seen by 2100 instead appeared many decades earlier than predicted. While we have concentrated on certain scientific aspects of climate breakdown, social and economic impacts and human resilience have attracted less attention. There are few historical precedents for change of this enormity.


Under the IPCC's A1B climate scenario, the United States will experience an additional 35,000 murders, 216,000 cases of rape, 1.6 million aggravated assaults, 2.4 million simple assaults, 409,000 robberies, 3.1 million burglaries, 3.8 million cases of larceny, and 1.4 million cases of vehicle theft, compared to the total number of offenses that would have occurred between the years 2010 and 2099 in the absence of climate change.

Of course in larger nations, such as the United States, there will be big variations in climate breakdown that will be influenced by latitude, proximity to coastlines, etc. The south is expected to roast while the north merely swelters.

Climate breakdown will trigger wars of the worst kind - wars of subsistence, survival.  As Gwynne Dyer put it (I loosely paraphrase), no village no matter how peaceful will allow its children to starve before it raids its neighbours.

Then there's the problem of mass migration. Long before climate breakdown becomes a death sentence, people wanting to survive will attempt to migrate.

All of these things - crime waves and social collapse, mass migration and climate wars are very much on the minds of military planners around the world. Climate breakdown has been a central theme of the last two US Defense Department's Quadrennial Defense Reviews. The British MoD has undertaken similar studies.  The American QDRs were legislatively mandated. Since Trump took office they've been replaced by NDS, National Defense Strategy papers, and these reports are classified.
Posted by The Mound of Sound at 7:57 AM

This guy impressed me when i heard him at VIU, Nanaimo some years ago.

This is research not anecdotes.

Have you read "Climate Wars"? The second edition is best.

Sadly, the effect of all the research and dissemination seems to be akin to inserting a written prayer between the stones of the West Wall. Cassandras by the dozen! But don't stop.


Having operated this blog for 14 years I sometimes feel like a Cassandra. Many people seem to have lost interest. Many, it appears, have entered the "resignation" stage. Tell me, Danneau, do you think Canadians can give up?