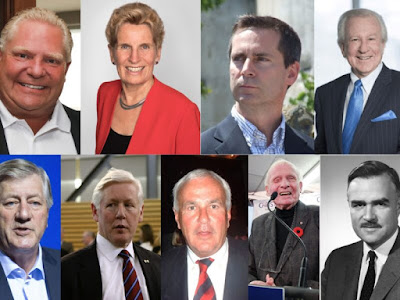 The process started when reporters asked Doug Ford about the accusations. He quickly pointed the finger at Wynne, who immediately jogged by and told everyone it was McGuinty, who stopped cancelling gas plants long enough to say it was Eves, who told his grandkids to tweet that it was Harris, who immediately put down the stacks of money he is making off of long-term care facilities to blame Rae, who phoned in from Myanmar to blame Peterson, who did whatever David Peterson is known for to blame Davis, who immediately came out of his cottage in his pajamas to blame Robarts, who is dead.

“What’s a long-term care facility?” asked the confused ghost of John Robarts. “Are people living past the age of 55, or something?”

Political observers are optimistic about this recent multi-Premier development. “Obviously this situation is tragic but there is a bright spot,” said political scientist Mary Cartwright. “We have finally found an issue on which political parties of all stripes can agree on: treating senior citizens like shit.”

The 8 living Premiers then added that they didn’t understand why the current government had not addressed the situation, and they were really to blame. At which point Doug Ford looked around for a beat and then muttered “oh, shit.”