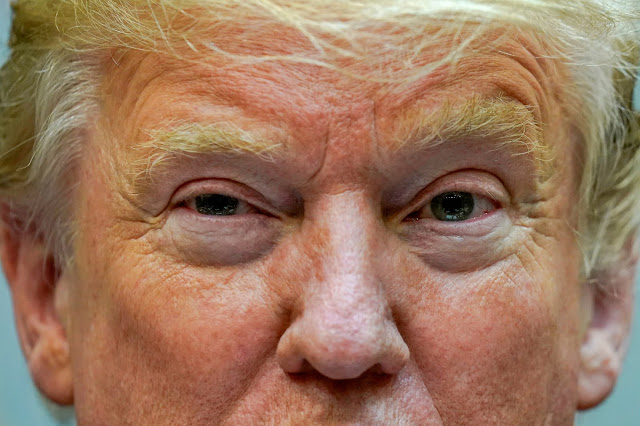 David Frum has penned an excellent take on the mental meltdown of the Mango Mussolini. (I know, I know, it's David Frum. I don't care.)


A couple of years ago, BuzzFeed asked a former White House official to explain the logic behind some bizarre Trump action. The official responded with one of the master quotes of the Trump era.

President Trump, the official said, is not playing “the sort of three-dimensional chess people ascribe to decisions like this. More often than not he’s just eating the pieces.”

Trump’s psychology is defined by his terror of rejection. The most stinging insult in his vast vocabulary of disdain is loser. And yet every poll, every powerful Biden TV ad, forces Trump to contemplate that he is headed toward a historic humiliation. He’ll stand with Jimmy Carter and Herbert Hoover, the incumbents rejected because they failed to manage economic crises.

Trump failed to prevent the crisis. Out of envy and spite, he dismantled the pandemic-warning apparatus his predecessors had bequeathed him.

Trump failed to manage the crisis. At every turn, he gave priority to the short-term management of the stock market instead.

Trump failed to message the crisis. He not only lacks empathy; he despises empathy.

Angry, scared, and aggrieved by the lack of praise for his efforts, Trump turns for safety to television, where his two-dimensional friends explain how everything is everybody else’s fault. They tell him that he is right and all his critics are wrong. They promise that miracle drugs will—poof!—make all his troubles vanish without effort. Sean and Tucker and Laura and Jeanine and the Fox & Friends romper room tell him stories that hold the terror at bay.

But those stories have drawn Trump into a twisting ghetto of craziness that is impenetrable to outsiders.

The more Trump talks about his crackpot theories, the more he reveals why he plunged the country into such a catastrophe. He never cared about anybody else. He ignored unwelcome realities, because only fantasy flattered his ego as it required to be flattered.

But the most important thing to notice about the Trump-Fox blizzard of mania is how remote it is from anything that real-world voters care about. In 2015, Trump apprehended that most Republicans were talking about things that Republican voters did not then care about: deficits, taxes, productivity, and trade. In 2015, Trump apprehended that nobody was talking about things that Republican voters did care about: immigration, drugs, the declining status of less educated white men.


Trump is all about Trump. That’s always been true. For three years, though, Trump was protected from himself by the prosperity he inherited from others. Trump has squandered that prosperity, as he previously squandered the fortune bequeathed by his father. The consequences are here. The fairy tales Trump tells on Twitter will not conceal those consequences from the voters Trump needs.

.. Haha - Frum gets it..
But he misses the final stroke of his own finesse..

'Obama was mean to me.. bullied me.. wah wah..
and nobody was strong enough to help me out.. wah'

But that's always been Trump.. and its always what his family is about..
.. at his very basis.. Trump is a 'suck'.. the old schoolyard insult..
& his family are sucks.. everything about him sucks

Trump is a suck to be sure, Sal. It's part of his pathology. It manifests in his utter absence of empathy for anyone else. I think in school we called that a "whiny bitch."

Never has it seemed more apt to observe that the emperor has no clothes, Mound. Yet his courtiers still follow him slavishly with made-to-measure accouterments, desperately trying to hide his increasingly obvious and repulsive nudity.

For me, what differentiates Trump and the pandemic is that I don't loathe Covid-19. I despise Donald Trump.

My SKorean friend asked did I know Trump is Losing 500,000 per day from 5 of his 6 hotels and thus his reason for opening the US up.. Anyong