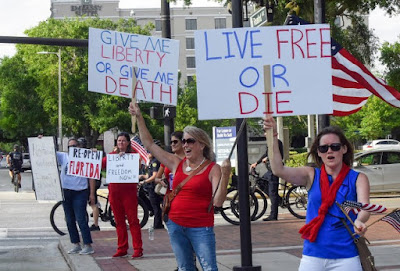 Texas, Tennessee, Alabama, Kentucky and North and South Dakota are the current hotspots for Covid-19 outbreaks in the United States.

In a 7 May report, obtained by NBC News, the list of top 10 surge areas included Nashville, Tennessee; Des Moines, Iowa; Amarillo, Texas; Racine, Wisconsin; Garden City, Kansas, and Central City, Kentucky – a predominantly white town of 6,000 people which saw a 650% week-on-week increase. Muhlenberg county, where Central City is located, has voted Republican in every presidential election since 2004, with Trump winning 72% of votes in 2016 – the biggest ever victory for the party.

The geographical spread of new hotspots suggest that the virus is advancing quickly outside major coastal towns and cities such as New York, Newark and Seattle where infection rates are now plateauing or dipping.

Many of the new emerging hotspots, both rural and urban, are in states where governors refused to issue stay-at-home orders, or are following Trump’s advice to relax lockdown restrictions despite public health warnings about the dangers of doing so too soon.

Nobody wishes this virus on anybody but at least these red states have chosen their path to become an invaluable miner's canary for others still reluctant to relax restrictions. It will be interesting to watch what unfolds there over the next few months.

Those signs they're holding should read, "give me liberty AND give me death," and "live free AND die."

For a sneak preview of the outcome compare Covid-19 cases and fatalities between Sweden and other Scandinavian countries. Sweden took a laissez-faire approach and paid the price.

I was thinking the same thing when I posted that photo, Cap. It's all "constitutional rights" and "liberty" until your ass gets the 'rona.'

Oh dear, this is getting old.

Oh dear, this is getting old.
The US diggs it's own grave day by day.


John Horgan has 'proposed' that the US ( that's not how he said it) border remain closed.

He will be proved correct.