I Don't Even Know How to Process This 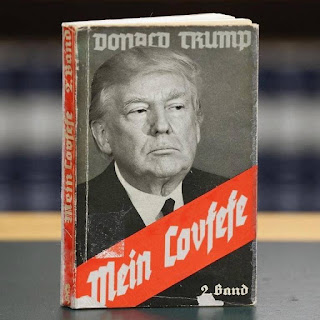 How, over the span of 48 or 72 hours, does it seem that America has entered free fall?

The brutal death of another unarmed black man at the hands of a white police officer. Protests and riots sweeping the United States and spilling over into other countries as far away as Europe. A racist degenerate president issuing dog whistle tweets to a nation divided. America at a slow simmer of grievance and hatred that threatens to boil over.

Now this broken man, Trump, has announced that he will designate ANTIFA a terrorist organization, something he would never imagine doing to America's white supremacists.


“This is being driven by Antifa,” national security adviser Robert O’Brien told CNN on Sunday, according to NBC. “And they did it in Seattle. They have done it in Portland. They have done it in Berkeley. This is a destructive force of radical — I don’t even know if we want to call them leftists. Whatever they are, they’re — they’re militants who are coming in and burning our cities, and we’re going to get to the bottom of it.”

ANTIFA is a favorite target of the right. On May 30, Republican Sen. Marco Rubio of Florida tweeted, “News networks missing a big story. In city after city we have a rogues gallery of terrorists from Antifa to ‘Boogaloo’ groups encouraging & committing violence. They may not be ideologically compatible but share a hatred of govt & police & are taking advantage of the protests.”

Boogaloo often refers to right-wing groups; “From militia groups to white supremacists, extremists on a range of online platforms talk about—and sometimes even anticipate—the ‘boogaloo,'” ADL reports. Trump did not mention that group in his declaration, but officials’ blaming of outsiders for the violence has run the gamut of a variety of groups.) The degree to which ANTIFA is involved in riots throughout various cities is disputed.

Experience shows that Trump always pursues what he believes will advance his personal interests, what will sell to his base. With an election five months distant and his popularity flagging, in large part due to his astonishing incompetence in handling the Covid-19 pandemic, Trump needs a diversion and what better than to stoke the Culture War.

Just what is ANTIFA?  Who leads it? How is it organized? Where is it based? How is it funded? Does it even exist?


According to ADL, ANTIFA stands for the “anti-fascist protest movement.”

“…antifa activists have aggressively confronted what they believe to be authoritarian movements and groups,” ADL reports. “…These violent counter-protesters are often part of ‘antifa’ (short for ‘antifascist’), a loose collection of groups, networks and individuals who believe in active, aggressive opposition to far right-wing movements.” According to ADL, “While most counter-protestors tend to be peaceful, there have been several instances where encounters between antifa and the far-right have turned violent."

"A loose collection of groups" of which "most... tend to be peaceful." That doesn't sound like an organization much less a terrorist organization.  Coming from Trump, who uses the "bad apple" analogy when it comes to white supremacists, the majority of which he has described as fine people, it is telling that he chooses to paint those opposed with such a broad brush of "terrorists."

This is America, after all, a nation beset by right-wing terrorism to which Trump has shown abject indifference.


When the New Jersey Office of Homeland Security and Preparedness issued its terrorism threat assessment for 2020 last week, it noted a marked shift.

The threat level from violent, homegrown extremists, and specifically white supremacists, was marked in red as the top category: “High.” The threat from the Islamic State, Al Qaeda and their ilk was demoted to third, in green: “Low.”

“In the U.S., more people are killed by far-right extremists than by those who are adherents to Islamist extremism,” said Mary McCord, a Georgetown University law professor and a former senior Justice Department official for national security. Her comments came at a discussion last week at the 9/11 Memorial and Museum, which commemorates victims of the most notorious attack by international terrorists on American soil.

Even the idea of  enacting a domestic terrorism law is hotly contested.


Proponents argue that a domestic terrorism law would streamline and clarify the patchwork of charges now used against homegrown extremists, charges that often avoid even mentioning terrorism.

Opponents counter that a new law would amount to a worrisome expansion of government powers, and might face constitutional challenges on the grounds of impinging on free speech.

Yet the New Jersey report laid out what is at stake in stark terms. “Some white supremacist extremists argue that participating in mass attacks or creating other forms of chaos will accelerate the imminent and necessary collapse of society in order to build a racially pure nation,” it said.

There have been many studies into the radicalization underway across the United States, including these papers from the Homeland Security archives, and many of them identify white supremacists as more dangerous to America than Islamic militants.  And it sure as hell isn't ANTIFA that has shot up mosques and synagogues and black churches. What has Trump done to stop that? Nothing.

Even the Beaverton couldn't give this one a pass.


Across the internet, large swaths of otherwise barely connected people who happen to hold the same belief system began speculating if they, too, now constitute an “organization”. Formal requests for recognition have already been filed on behalf of vegetarians, people who insist on continuing to watch Riverdale, and Libras.

The United States is currently only able to classify foreign entities as terrorist organizations, leading American adherents to the ANTIFA movement to the further surprise discovery that they are in fact now foreigners.

“No kidding!” responded Alana Weaver – a Chicago area clothing designer who believes that the slow creep of fascism must be opposed at all costs – upon learning that she was now a foreigner. “Do I get to pick what country I’m from now? Can I be Norwegian?”

The leaders of ANTIFA could not be reached for comment because they do not exist.

and many of them identify white supremacists as more dangerous to America than Islamic militants.

I believe that most of these people are from the evangelist churches.
They seem to be joined at the hip with the gunslingers of the USA.
It's a symbiotic relationship.

The USA has never been united and when you add in Facebook speak to Amazon speak vs Google, Twitter and Microsoft speak then we have a huge problem that crosses borders but destroys the US.
The US is no longer a democracy , I do not know the term for what it now is?

So Trump wants to outlaw groups that oppose fascism. That's exactly what you'd expect from a fascist. No way is he going to outlaw his Brown Shirts - the 3%ers, Proud Boys and Boogaloo Bois. He counts on those fine fellows to threaten Democratic governors with openly carried high-powered rifles.

Jeebus, 155 years since the Confederacy surrendered and America's "original sin" remains an open sore. It's grotesque. And, when America needs a healer, it has a true villain intent on exploiting this because he knows he cannot win in November on his record.

Anyone spot him this weekend ?? And those big beard champs in Michigan's State House rotunda that looked more like suicide bombers than patriots. They surface anywhere ? Askin for a friend..

There may be anarchist and nihilists who right wing nut jobs are conflating with antifa.

Odd how all these groups are white.

Sal, I was wondering the same thing. These guys like to rumble about the coming race war but they stay in mom's basement when things turn a bit unruly.

Yes, Rumley, it is odd that these groups are all white. Hey, I thought the Panthers were staging a comeback.