The Vengeful Wrath of Donald Trump 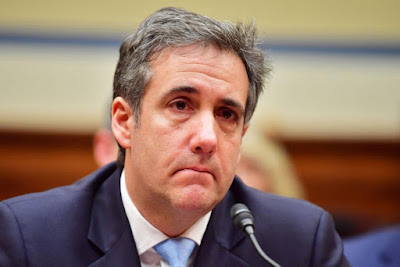 Former Trump fixer< Michael Cohen, was one of a number of inmates who qualified for early release from prison due to the Covid-19 virus. Then this happened.

Michael Cohen, former personal lawyer and fixer for President Donald Trump, was denied a promised early release from prison Friday, a day after an attorney from the Trump Organization sent him a threatening letter warning against him publishing a reported “tell-all” book before the 2020 election.

White House spokeswoman Kayleigh McEnany said “absolutely not” when asked at a news conference whether the White House directly or indirectly interfered in the decision to delay Cohen’s planned early released from a federal prison in New York state.

Cohen was due to be set free into home confinement Friday from the facility in Otisville because of concerns about the coronavirus spreading among inmates and guards.
He has completed a 14-day quarantine required for that release.

But the 53-year-old ex-lawyer, who was in the midst of serving a three-year criminal sentence, was told he would not be going home on Friday to his family in Manhattan, according to people familiar with the situation.

It is not clear if Cohen’s release, which was originally approved by the federal Bureau of Prisons, has been permanently rescinded.

Can't let Mikey write that book, not before the election.

Let's hope the book is a bestseller. After faithfully serving Trump I'm sure he's broke.

Gawd, if the Germans had not invented/coined schadenfreude, I'd so often be lost for words as to describe my feelings about guys like Cohen.


otoh, if this is how tRump treats his friends, I can understand (while not condone) Trudeau/Freeland foriegn policy which seems to be based on 'keep tRump happy'

At this point I'm surprised Trump hasn't had him transferred to Rikers Island for a little Covid-therapy.

If Karma is real, Trump will be coming back as a toilet seat in a diarrhea ward.

.. oddly.. I found myself contemplating that with Trump in the electoral garburator and that includes Mitch McConnell Inc.. it may be the perfect time for Trudeau Inc to step on the throat of Scheer - McKay Inc.. Yes Yes.. Queensbury Rules say no.. but Rules ? What Rules ? When was it ever a bad time to pitchfork vermin in the granary ? A good pressure hosing never hurt nobody ! Aside from the holy roller vermin.

A Biden caretaker to the south.. with the House / Senate.. and up north, Trudeau set for 8 years of rebuild Canada.. The Scandal of the Radioactive Hogs in the White House.. yer basic Chernobyl eh.. so step on Scheer - McKay.. clean sweep.. bury them.. and the rest of the non North American planetary hive can suck eggs.

I have yet to game it out.. but at this point, Trudeau could likely sink our 3 submarines as fish habitat, claim he saved wild salmon and boreal caribou by doing so.. and who stands in his way ? Ezra Levant ? Ms Rempel - Garner ? The Oklahoma Cupcake ? Kenney and Alberta are screwed forever or 12 years.. whichever comes first (poor Jason.. caught whipping Harper's dead horse wet Petro Superpower dream with Matt Wolf)

Maybe tomorrow I'll see things in less dismal fashion.. but right now.. the 'stakes' are on the grill.. and tomorrow I'll search for fiddlehead greens.. buy a honkin box of Malpeque.. pull my oyster knife out of storage.. and pretend we still have an east coast fishery.. aside from shellfish.. ...

Sal, you bastard. Just the mention of Malpeque is cruel in this age of quarantine. We don't have an oyster of that calibre out here. As oysters go, that was my first love.

.. come come Mr Mound .. there are some fine western mollusks.. and need I mention the mighty King Salmon ? Indeed, you have astonishing shellfish.. ie 'the clam' .. And are you not with striking range of Tofino ? Haha.. you may sup upon the greatest chowder ever in the history of the world.. and we (the deprived n depraved beasts in the east) must 'man' or 'woman' our can openers.. to create our thin gruel chowders.. !

We know you hold great feasts of salmon in BC.. while we pine away in the darkness with puny 'Atlantic Salmon'.. 'captured' somehow on the west coast when not too diseased or onfected, for shipment to Japan.. and we get frozen leftovers. How Atlantic Salmon migrate yearly to BC's 'tidewater' is a mystery (Air Canada?) .. for Jaques Cousteau or our vaunted Ocean & Fisheries Ministry.. but we do note, they also make it south to Argentina, Venezuela, Chile etc.. an astonishing leap of fish.. non ?