When 'Normal" Is Pathological 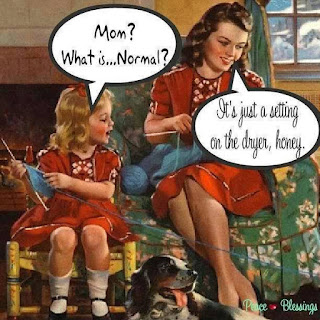 A recurrent theme on this blog is the subject of how something as benign sounding as "normal" can be a one-way road to the cliff-edge.

Anthropologist, Jared Diamond, addresses normalcy in his book, "Collapse, How Societies Choose to Fail or Succeed."  He discusses normalcy in the context of "creeping normalcy" or "landscape amnesia." That refers to human nature's shortsightedness, our ability to forget the past, to blur memories that remind us of how dangerously far we have gone over a remarkably brief period of years.  If you lose your awareness of what "normal" meant ten or twenty years ago, you have lost your metric by which to gauge change.  A sense of normalcy can mask enormous abnormality.

The Tyee's, Andrew Nikiforuk, addresses the danger in his latest column, "Normal is the Problem."


Sharon Wilson is a fifth-generation Texan who drives around rural communities and takes pictures of oil and gas facilities with an infrared camera. The pictures make visible all the methane pollution that industry and governments pretend is not happening in rural communities.

Wilson recently tweeted these two sentences: “We can and must do better than going back to normal. Normal is the problem.”

And she is right as rain about that. Normal has become a pathological state.

Since 1970, an outpouring of normality has just about destroyed the Earth: It has created an abnormal economic machine, blind to energy spending, that doubled the global population and boosted per capita consumption by 45 per cent.

At the same time the so-called value of global economic activity grew by 300 per cent. Meanwhile global trade has exploded like a coronavirus by 900 per cent. To support all this consumption and trade, the extraction of “living materials” from nature has jumped by 200 per cent.

...That’s like eating your kidneys for dinner, and I can’t think of anybody who would consider that normal except Hannibal Lecter.

We have eliminated 40 per cent of the world’s original forests. We have extirpated (and there’s a word for these normal times) most of the world’s large mammals. An estimated one million species of animals and plants stand on the brink of extinction. ...Homo sapiens, another mammal, are on that list, and we pretend that’s normal.

...Normal means you don’t have any respect for limits or sacred places. Normal means you think you can simply swap fossil fuels with so-called “clean energy” and protect the norm. But it mostly means you have surrendered your capacity to be human and to love this place.

So I don’t want to go back to normal.

I don’t want to go back to a world where it’s okay to industrialize and then globalize the care of old people as though they are just another resource to be mined before they die.

...I don’t want to go back to the digital contagion uprooting our minds and souls where authoritarian males justify the mining of our computers for data to improve their ability to engineer our behaviours.

...I don’t want to go back to a world where we accept the status quo of escalating wealth inequalities and polarized political thinking.

Polarization ends in one of three bloody ways: civil war, revolution or slavery.

...I don’t want to go back to a world where billionaires think so little of this Earth that their primary obsession is to escape to Mars.

I don’t want to go back to a world where political leaders don’t have the courage to talk about cheap energy, reckless consumption, over-population and climate change in the same sentence.

And I don’t want to go back to a world where the media can’t admit that our civilization, as William Ophuls puts it, “has gotten too big, too complex and too hard to manage.”

I don’t want to go back to an economy where corporations socialize all costs and privatize all gains. That’s robbery and theft. And it must end.

...So Sharon Wilson got it right. Normal is the problem, and the normlessness of a pandemic has exposed the fat tail of normal as pathology.

And I am not going back to it.

Sharon Wilson says we can leave normal for better this way: “Do all things with love, and be damn fierce about it.”

Ask yourself this: Is your political party of choice in these ranks? If it is, what are you doing supporting it?

A fine essay by Nikiforuk in the Tyee.

Too bad kenney in Alberta couldn't agree with things as normal as that. No, he is passing an likely unconstitutional Act into law, and which almost certainly breaches the Charter of Rights.

Quoting one editorial, the proponents espouse it protects the Rule of Law and public safety and stops protestors from hurting the economy, while critics proclaim it's an affront to democratic rights, constitutes authoritarian overreach and presents a threat to Indigenous Peoples' way of life.

Apparently reaching into every corner of Alberta life, protestors cannot assemble on sidewalks or even private property. kenney was advised of the uncontitutionality of this horse manure, but taking a leaf from the harper playbook, he figures by the time the SCC gives it thumbs down, he'll be away and running the World's biggest Tarsands Empire, worth about 20 bucks at current prices. And all the old people will have croaked and all enviromental monitoring has alreadt been stopped. This is Canada?

Meanwhile, what are the RCMP supposed to do? They are a federal institution but play the rent-a-cop role in Alberta. Do they enforce provisions of a right wing fascist backwater parochial provincial "law" proclaimed by a would-be emperor ideologue? Or do they tell kenney to get stuffed because the law is likely unconstitutional? And that they won't have anything to do with enforcing its provisions? As happens so often with the right, they manage to put our institutions between a rock and a hard place.

I don't see an easy way out of this. If Trudeau had balls, he'd stop all Covid-19 relief to kenney's would-be empire, and starve the bugger out. But we know that won't happen. Apparently kenney wants civil war as rabidly in Canada as the White Christian Dolts of Amerika want it there against blacks -- just in our case it'll be the First Nations and little old ladies with eco-placards who get screwed until they can take it no more.

I remain anything but optimistic about the societal fallout of this viral epidemic in what remains of our country.

.. hmm ..
Many folks seems to confuse 'normalcy' with 'pathway'.. or 'passage'
Its quite possible I have spent a lifetime either seeking 'normal' or spent my life avoiding 'normal'.. I'm really not sure, Mound

I sent a comment to Lorne the other day.. about 'dance like EVERYBODY is watching' (the context was about his writing)
The original of course is 'dance like NOBODY is watching' (which is not at all about writing) But we can substitute 'living' into such quotes & contexts.. or searching or trying to attain etc..

Maybe we could try out 'walk in beauty' .. you seem to have figured that out..
Seems a better 'goal' or plan than trying to get to a vague misty place called 'normal'

And wasn't it Piglet out walking, who asked Winnie the Pooh 'what day is it ?'
and Winnie replied.. 'its today..'
Piglet - 'Oh, my favorite day !!'


What if the greatest threat we face is our complacency?

How do you live with an awareness of the ground constantly shifting under your feet, always in the same direction down a path that becomes increasingly darker? How can you live with that and not become just a little mad?

As I watch this unfold, as I read the scientific research and analysis, observe the inescapable decline, there are times that I feel alienated from the society that pursues its own ruin. It's like watching an imminent train wreck - from the club car - amidst a crowd of inebriated revelers.

It's easy to say "I want a better deal. I want more of this, this, this, and that, and a whole lot less of that, that, that, and this." That's about as useful as telling the mall Santa what you want for Christmas.

As individuals and as societies, we're just not up to this. If we can see a way forward in the short term - an electoral cycle, three or four or five years - we will avoid having to think of what awaits in ten or twenty years and we will do that despite the increasingly urgent warnings. "Oh, they'll think of something." Except that "they" conceived where we are now. "They" (and I know a few of them) have an awareness that they modulate with high-octane denial. "They" are like the casino gambler who, having lost the farm, sells the family car for a few bucks to win it all back on just one more bet.

I can only hope, Mound, that the crisis we are currently grappling with is forever seared into our collective consciousness as an object lesson of what the old 'normal' helped bring about. May we avoid its return like the plague we are now trying to overcome.

Hope, Lorne? Isn't hope the final opiate of the sentient masses? When I saw photos of packed crowds in Toronto parks, on beaches in Brighton and Southend, on beaches and lakes in the Ozarks or during Spring Break in Florida, I was reminded of how quickly we'll jettison even basic precautions such as social distancing, face masks, hand-washing and such. It drives home who blithely we will sacrifice the social capital we amassed through our two months of lockdown sacrifice. I had to go to the grocery for milk yesterday. A couple of weeks ago at least two thirds would be wearing masks. Yesterday there were just three of us out of about 30 shoppers and a dozen store employees with masks.

Tom Friedman has an excellent piece in today's New York Times about how we systematically removed the buffers that protected us -- in the pursuit of efficiency.

We abandoned what used to be common sense, as we placed our faith in a global marketplace.


Thanks for mentioning Friedman's piece, Owen. There's much in it that's indisputable. Where he comes up short is his apparent belief that we can ride these threats out if only we change our ways. That ship may have already sailed.

Friedman is not yet ready to embrace the idea acknowledged by Nikiforuk of how pathological our sense of normal has become. We have to quickly find ways of shrinking our impact on this shared biosphere. We have to learn to live within the very finite limits of the planet and that demands a sharp reduction in developed world consumption and a more equitable distribution of the planet's resources among the developed, developing and Third World nations. That's like asking the fine diners to admit their gluttony and then atone for their sins.

The other point Friedman overlooks is that we're close, perhaps very close, to running out of time. Even Justin is skirting those deadlines. The Precautionary Principle is the established law of Canada and yet we almost never heed it.

I learned a long time ago what has been taking place since the llWW.....my time of entry into world....that unfettered greed has been considered by most to be normal and anything else is abnormal. Anyong