A "Witch's Brew" of an Election 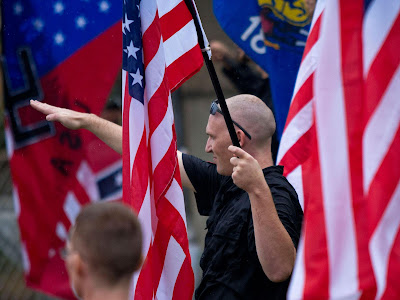 US intelligence agencies are warning of the threat of extremist violence in the runup to the November 3 elections. From Reuters:

U.S. security officials are warning that violent domestic extremists pose a threat to the presidential election next month, amid what one official called a “witch’s brew” of rising political tensions, civil unrest and foreign disinformation campaigns.

FBI and U.S. Department of Homeland Security (DHS) memos say threats by domestic extremists to election-related targets will likely increase in the run-up to the Nov. 3 election.

Those warnings so far have largely remained internal. But New Jersey’s homeland security office took the unusual step of publicly highlighting the threat in a little-noticed report on its website last week.

“You have this witch’s brew that really hasn’t happened in America’s history. And if it has, it’s been decades if not centuries,” said Jared Maples, director of the New Jersey Office of Homeland Security and Preparedness, which published the threat assessment.

And the threat isn't Antifa as Trump constantly claims.

Trump officials have pointed the finger at left-wing anarchists and anti-fascists during protests against police brutality and racism over the summer, but federal court records provide little evidence showing those arrested for violent acts had affiliations to far-left groups.

Last week, the top two DHS officials acknowledged in congressional hearings, however, that white supremacists have posed the most lethal domestic threat to the United States in recent years.

White supremacist, anti-Semitic, anti-government, and related ideologies were tied to 77 percent of 454 alleged domestic extremist murders in the past decade, according to data compiled by the Anti-Defamation League, a New York City-based anti-hate advocacy organization, and presented at one of the congressional hearings last week.

Most of the terrorism plaguing the United States is domestic, not foreign, and is rooted in the far-right, not the left. However anti-semitic, white supremacists recognize the president as a kindred spirit and Trump values their support. He's heard "they love their country" after all.

Bit of a stretch but this sort of fits in with the white supremacist origins?

Tonight we will witness the debate that will possibly decide the outcome of the US election; not comforting!
A likely Trump win in this debate and upcoming election will release even more of these right wing morons upon the world.
The future looks bleak; keep the border closed.

Police unions across America heavily favour Trump. QAnon types are also finding a place in even elite police squads. I think it was last month I posted a photo of Mike Pence at the airport in Miami yucking it up with two SWAT team members one of whom had the "Q" badge openly displayed on his body armour.

That there are far too many thuggish cops in America is not debatable. Cops tend to lean to the right, some to the far-right. This favouritism has been on open display when BLM protesters have met with violence from white supremacists.

For a Green Party supporter, you have been very quiet.

BC's Greens recently chose a new leader w/o comment from you (that I saw).
(While Weaver goes astray.)

Now the National Party vote is on but over soon.

I joined up to vote for Dmitri cause I think that three hopelessly centrist parties chasing the same center-left demographic is counterproductive.

.. the oncoming American Election Fandangle reminds me vaguely of Canada's when we dumped Harper and he showed what a quitter feeb pretender and ideologue he really is. (Scheer turned out to be a complete posturer as well) We had to end Harper's run.

So too with Trump.. America needs to hit the reset button NOW. Biden is likely a placeholder suitable to end the Trump run.. but look at the parasites that have emerged. Scumbags, violent thieves, racists, agendas everywhere, looting underway via Trump.. who more and more appears to be a highly compromised money launderer who also owes a lot of dinero ! I've been reading via Twitter as legal and financial minds examine the bizzare financial picture of the Trump enterprises.. and that's what they say is an undeniable pattern

Reset aside to a non-Trump holding pattern under Biden, American now needs to treat the scumbags and malicious interferences as a dangerous virus epidemic that could overwhelm civil society if not dealt with bluntly and effectively. As well, the policing issues are staggering. Oh and maybe deal with COVID-19 too ? Then there's the systemic racism and poverty.. Uh oh - Climate Change !! Political greed ! What did I leave off the Biden-Harris to do list ?

NPoV, I still support the Greens, provincially and federally, but with dampened enthusiasm. My problem is that neither outfit has an identifiable path to grow into a legitimate political force. Ms. Furstenau is great, a school teacher as I understand it. She is versed in neither law nor science nor politics. Of course she may grow into the job but, with Horgan poised to take a clear majority, the Greens will struggle to maintain relevance.

At the federal level I find the candidates also uninspiring. I'm sure whoever gets the nod will be quite lovely.

I hope I've been consistent in pointing out that climate breakdown, even in Canada, is accelerating and that windows of opportunity to respond to it are either already closed or now closing. Time is not on humanity's side. I don't see the urgency of this conveyed by the Greens at either level and, to my mind, that's a message of capitulation, resignation.

I backed the Greens all these years imagining that their time would come. I told myself that once the crunch hit we would all flock to the one party that had been waging the good fight. I don't think that's a likely outcome any more.

I had always hoped for a breakthrough led by Elizabeth May but, despite her incredible efforts, that didn't happen. In British Columbia, Andrew Weaver ought to have done even better but, sadly, no. So what do we expect to achieve with leaders less experienced, less knowledgeable, less capable? Who among them will revive the Green Party momentum?

We need brawlers capable of delivering a punch and slipping the adversaries' jabs. Time is not on our side.


Sal, I've come to think that the Trump presidency would have been impossible save for one thing, a hopelessly corrupted Senate. If McConnell's Raiders had shown even a modicum of integrity Trump would already be gone.

We expect too much of Biden. I fear that, if he wins, he'll try to be a peacemaker. Long before America needs reconciliation on Capitol Hill it needs housecleaning and there's only so much that can be done from 1600 Pennsylvania Avenue.

Perhaps America most needs a presidential berserker, axe in hand. He needs to expose the depth and breadth of corruption that has spread through America's government at so many levels. Even if Biden wins he's got no more than four years to unleash the hounds and get the worst of the miscreants into the hands of the criminal justice system.

I'm not convinced that America isn't already too broken to fix. Isn't that evident from last night's debate?

I agree, Mound. Trump's enablers bear as much responsibility for this debacle as Trump himself does. They know they are a minority. And they will do whatever it takes to hold and maintain power.

I prefer to call it a “Dialectal” brew since it was an all male debate so called. Anyong