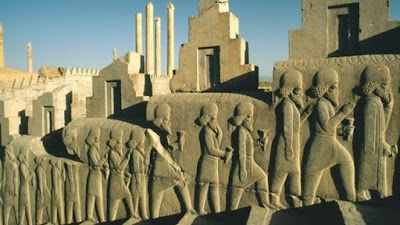 I get it. We're exceptional. In the history of humanity there's never been anything like us, here, today. We're all but invincible, masters of all we survey.

We tend to look at the world as one giant civilization. Perhaps that's because we're a collection of civilizations all integrated through common conventions, communications, trade and such. We've developed institutions to facilitate this integration - the United Nations, the World Bank, the World Trade Organization, the World Health Organization, the "world" this, the "world" that. Then there's a second tier of regional conventions and alliances. After a while it's all a blur.

What is a civilization? What is it really? Luke Kemp of the Cambridge University's Centre for the Study of Existential Risk defines it as, "a society with agriculture, multiple cities, military dominance in its geographical region and a continuous political structure. Given this definition, all empires are civilisations, but not all civilisations are empires."

There have been many civilizations in the span of human history. Many believe the Sumerians/Mesopotamians (6500 B.C.E.) were the first to develop agriculture, animal husbandry, cities, trade, a system of writing, that sort of thing. It's as good a place as any to start. Kemp has a list of all civilizations going way, way back. 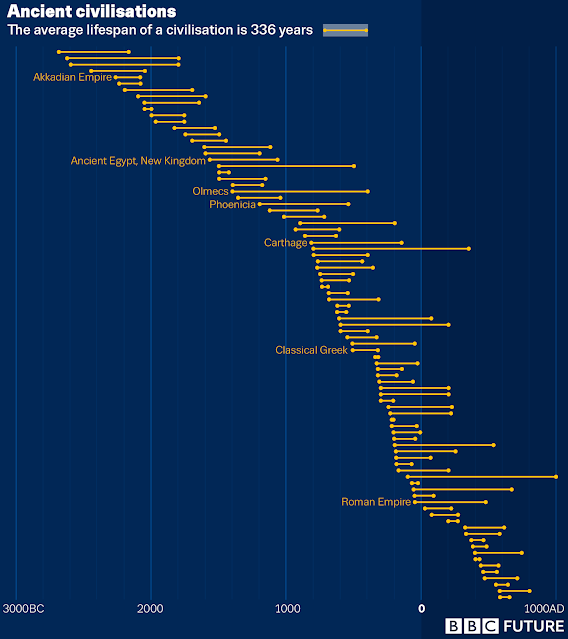 Some civilizations were huge, others weren't. Some were long-lived, i.e. Rome, Egypt, others less so. On average, a civilization lasts 336 years. Not very long.

The future of our modern civilization(s) is a bit worrisome. Humans have never had so much wealth and power nor have we had such means and inclination to bring our civilization(s) crashing down. Some scientists warn we're even on the verge of triggering a sixth mass extinction.

The question then becomes, what have we learned about how civilizational collapse is triggered. Here Kemp has assembled the collective wisdom of those who theorize on such things.

If the fate of previous civilisations can be a roadmap to our future, what does it say? One method is to examine the trends that preceded historic collapses and see how they are unfolding today.

CLIMATIC CHANGE: When climatic stability changes, the results can be disastrous, resulting in crop failure, starvation and desertification. The collapse of the Anasazi, the Tiwanaku civilisation, the Akkadians, the Mayan, the Roman Empire, and many others have all coincided with abrupt climatic changes, usually droughts.

ENVIRONMENTAL DEGRADATION: Collapse can occur when societies overshoot the carrying capacity of their environment. This ecological collapse theory, which has been the subject of bestselling books, points to excessive deforestation, water pollution, soil degradation and the loss of biodiversity as precipitating causes.

INEQUALITY AND OLIGARCHY: Wealth and political inequality can be central drivers of social disintegration, as can oligarchy and centralisation of power among leaders. This not only causes social distress, but handicaps a society’s ability to respond to ecological, social and economic problems.

The field of cliodynamics models how factors such as equality and demography correlate with political violence. Statistical analysis of previous societies suggests that this happens in cycles. As population increases, the supply of labour outstrips demand, workers become cheap and society becomes top-heavy. This inequality undermines collective solidarity and political turbulence follows.

COMPLEXITY: Collapse expert and historian Joseph Tainter has proposed that societies eventually collapse under the weight of their own accumulated complexity and bureaucracy. Societies are problem-solving collectives that grow in complexity in order to overcome new issues. However, the returns from complexity eventually reach a point of diminishing returns. After this point, collapse will eventually ensue.

Another measure of increasing complexity is called Energy Return on Investment (EROI). This refers to the ratio between the amount of energy produced by a resource relative to the energy needed to obtain it. Like complexity, EROI appears to have a point of diminishing returns. In his book The Upside of Down, the political scientist Thomas Homer-Dixon observed that environmental degradation throughout the Roman Empire led to falling EROI from their staple energy source: crops of wheat and alfalfa. The empire fell alongside their EROI. Tainter also blames it as a chief culprit of collapse, including for the Mayan.

EXTERNAL SHOCKS: In other words, the “four horsemen”: war, natural disasters, famine and plagues. The Aztec Empire, for example, was brought to an end by Spanish invaders. Most early agrarian states were fleeting due to deadly epidemics. The concentration of humans and cattle in walled settlements with poor hygiene made disease outbreaks unavoidable and catastrophic. Sometimes disasters combined, as was the case with the Spanish introducing salmonella to the Americas.

RANDOMNESS/BAD LUCK: Statistical analysis on empires suggests that collapse is random and independent of age. Evolutionary biologist and data scientist Indre Zliobaite and her colleagues have observed a similar pattern in the evolutionary record of species. A common explanation of this apparent randomness is the “Red Queen Effect”: if species are constantly fighting for survival in a changing environment with numerous competitors, extinction is a consistent possibility.

You can read the list as well as I can. What do you make of it?

Kemp gives us another handy graphic to help makes sense of all this. 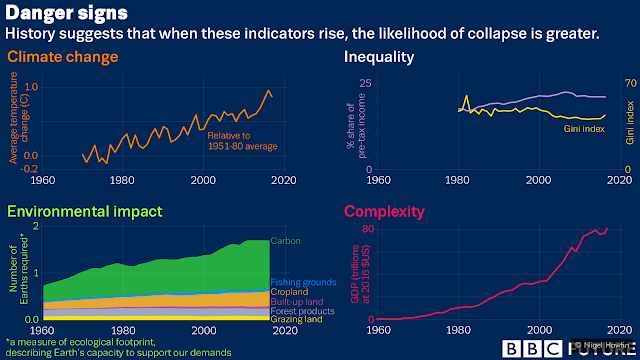 The author says there are other trends that may help fend off collapse even if temporarily rather than permanently, in part instead of entirely. Kemp finds that, globally, we have become more resilient through diversification of our economies and we are technologically far more advanced and more innovative.

Still, when we look at all these collapse and resilience indicators as a whole, the message is clear that we should not be complacent. There are some reasons to be optimistic, thanks to our ability to innovate and diversify away from disaster. Yet the world is worsening in areas that have contributed to the collapse of previous societies. The climate is changing, the gap between the rich and poor is widening, the world is becoming increasingly complex, and our demands on the environment are outstripping planetary carrying capacity.

Yet we have created our own vulnerabilities, our Achilles Heel(s). The neoliberal era ushered in globalism, global free trade. We may come to regret that.

Worryingly, the world is now deeply interconnected and interdependent. In the past, collapse was confined to regions – it was a temporary setback, and people often could easily return to agrarian or hunter-gatherer lifestyles. For many, it was even a welcome reprieve from the oppression of early states. Moreover, the weapons available during social disorder were rudimentary: swords, arrows and occasionally guns.

Today, societal collapse is a more treacherous prospect. The weapons available to a state, and sometimes even groups, during a breakdown now range from biological agents to nuclear weapons. New instruments of violence, such as lethal autonomous weapons, may be available in the near future. People are increasingly specialised and disconnected from the production of food and basic goods. And a changing climate may irreparably damage our ability to return to simple farming practices.

Think of civilisation as a poorly-built ladder. As you climb, each step that you used falls away. A fall from a height of just a few rungs is fine. Yet the higher you climb, the larger the fall. Eventually, once you reach a sufficient height, any drop from the ladder is fatal.

We still have a slim chance to turn this around. All we need is the will to continue and leaders unlike today's crop, those who would herd us over a cliff.

The collapse of our civilisation is not inevitable. History suggests it is likely, but we have the unique advantage of being able to learn from the wreckages of societies past.

We know what needs to be done: emissions can be reduced, inequalities levelled, environmental degradation reversed, innovation unleashed and economies diversified. The policy proposals are there. Only the political will is lacking. We can also invest in recovery. There are already well-developed ideas for improving the ability of food and knowledge systems to be recuperated after catastrophe. Avoiding the creation of dangerous and widely-accessible technologies is also critical. Such steps will lessen the chance of a future collapse becoming irreversible.

We will only march into collapse if we advance blindly. We are only doomed if we are unwilling to listen to the past.

It no longer is about what has been done or happened by the 'covered sources' that have total power to first enact then --dare or fight any opposition....and so it has followed this same pattern throughout the Bush jr and Trumpy adm....

So, the media is off-limits as they are total compromised ---So look to other sources less so or not at all. And then new strategies are tried and changed till even trade agreement's slight-of-hand-in destabilizing existing laws and the affect of regulations are firmly dished out equally and in a timely fashion...Those found to be at the 'front' against such corruption-- should be promoted when found to be engaged in the same pursuits ....and so it should go.....? Or else?

we have the unique advantage of being able to learn from the wreckages of societies past.

And yet we knowingly place the burden of our errors upon our offspring and their offspring.

The next 'civilisation' is likely to be Asia based,China, Turkmenistan and other ex USSR satellites.
They are recourse rich and by enlarge dictatorships plus unstable.
Add to the brew a western world that is rapidly becoming less democratic and authoritarian I see a dystopian world not too far way.