When a Beater Finally Becomes a Junker. 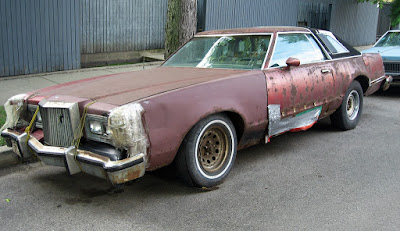 When I was young, a guy's first car tended to be a real beater. As long as it was cheap and it ran, it was okay if it was on its last legs. You nursed it along, trying to get another year, another few months, an extra week out of it but you reached that point of no return where just to keep the thing wheezing along wasn't worth the cost.

It's a gas-guzzler and it's burning oil. The brakes are fading and the tires threadbare. Your dad won't have it on his property and, when you go to park it out on the street the neighbours give you a ton of side-eye. No girl would be seen dead in it and even your buddies would rather walk than take a free ride. It needs a lot of work, a lot of money, and even fixed up it would still be a beater.

I wonder if that isn't a metaphor for the United States today. America does seem pretty clapped out. It needs a load of costly repairs and, even then, it may still be broken. Is it worth the bother?

Of late there have been articles showing up in the world press asking the same question, is America broken? Has it gone past some point of no return? Has the beater become a junker?

I think America is broken, FUBAR, F##ked Up Beyond Any Redemption. It's gone too far. It has lost its democracy. It is now an oligarchy in the guise of an illiberal democracy. Predators abound starting with its "bought and paid for" Congress, America's deeply corrupted regulatory system and utterly rigged judicial system groomed to reliably dispense its favours on one group to the exclusion of the others, to the few at the expense of the many. Sure, Americans could elect a good president to replace an unfathomably bad president but the country is too broken to be fixed from the Oval Office.

It would be bad enough if poisoned, corrupted politics was all that ailed the Degraded States of America. But there's more, so much more at play and there's a synergy to America's maladies that each magnifies the others. The U.S. is showing most of the trends that have, in the past, heralded collapse: climate change, environmental degradation, inequality, oligarchy, complexity and external shocks (i.e. inability to control a pandemic). The United States today checks almost all the boxes.

Perhaps the worst threat America faces is internal, the breakdown of social cohesion.  Abraham Lincoln is remembered for warning his countrymen that "a house divided against itself cannot stand." Shortly after that the U.S. was plunged into its worst conflict, the Civil War. A week ago, former Obama national security advisor, Susan Rice, warned that, among the many urgent threats facing America, social division magnified all the others.

Political polarization is a “force multiplier” that worsens other threats and cripples our ability to combat them. Stoked by leaders who profit from divisive politics, our polarization prevents us from effectively confronting vital challenges, from the pandemic and its economic consequences to climate change; from the rise of white supremacist groups, which account for the bulk of domestic terrorism, to reforming our immigration system.

There is nothing that will be decided on November 3rd or in the weeks and months following that will heal America's social division, now said to be as deep as it has been at any time since the Civil War. Americans are divided across many fault lines - cultural, political, ethnic, economic, it seems almost anything will do. There is no common base of trust and goodwill. A perverse form of tribalism has taken hold and some are plainly spoiling for a fight.

The world looks on in despair tinged with disgust. Even those who wanted to give America the benefit of the doubt had their hopes shattered by the spectacle of last night's presidential debate that made them confront the grim truth of the no-longer United States of America.

Thomas Jefferson foresaw that the "the tree of liberty must be refreshed from time to time with the blood of patriots & tyrants. it is its natural manure."

America has a tyrant. That tyrant has his own version of the Brown Shirts of  the 1930s, who go by a variety of names: Boogaloo Bois, Proud Boys, Ku Klux Klan and more. Challenged to repudiate white supremacists, Trump refused, instead urging them to "stand back and stand by." Meanwhile, judging from the one-sided endorsements of America's police unions, law enforcement stands squarely behind the tyrant.

Tyrants, the worst of them, often have a breakout moment after which nothing is ever the same again.  Sometimes it comes in the form of a coup. Some coups are violent, others are constitutional. Sometimes the tyrant falls back and creates an insurgency to destabilize the state and exploit its weaknesses. It almost never works out and normally ends badly, in ruins.

No, I don't think the elections now just a month away will reverse America's decline. I think the beater is now a junker. Good luck to us all and God bless America.

BTW, I didn't watch the debate last night, not a minute of it. If there's one thing about Trump it's that he's predictable - in a pathological sense.

Morbid curiosity drew me to the 'show'.
I then consoled myself with this little bit of political discourse, Canadian style.

Hard not to be a little smug being Canadian after that?


Yes, TB, that's good for the soul. It does remind us how the depth of intellect in high office has flagged in recent decades. The son is plainly not the father. As for Trump, it's like Pierre and DJT were from different planets, Trump from a place with oxygen starvation.

Jack Webster. His son and namesake was a partner at a lawfirm I was with for a couple of years. The son wasn't very fond of his dad. The old man was a miserable son of a bitch both publicly and, it seems, privately. Well at least we had Rafe Mair.

Rafe Mair was a speaker at a convention we had some years go.
One of our main organizers was tasked with picking him up at the airport then taking him back later.
Awkward sod that man said our organizer!

So that's where my car went! (And the country I used to call home and whose flag I saluted every morning in the school yard, eventually with figurative fingers crossed and increasing degrees of cynicism.) I'll see your Beezer and raise you a '58 Pontiac Wagon with a Two-On-The-Column, holes in the floorboards, grass growing out of the tailgate and bacon grease in the wheel bearings.


I'll bet most of us went through this, Danneau. Among my buddies, one had a 48/49 Volvo 444. That lasted until he decided to take it out on the lake one winter to mess around. Crack, gone. Another, whose dad owned the local cab company, had a clapped out Plymouth with industrial rubber floor mats that caught the mystery oily fluid that dripped from beneath the dashboard.

The trophy went to Dennis Allchin who had a 39/41 Studebaker Commander, police car with that weird remote-control spotlight. Earlier versions of that same beast were called the Studebaker Dictator. You could move a one-bedroom apartment in that monster in a single trip, two max. We had some fun times in that thing. Me, I had two VWs or parts of two hobbled together and given a coat of red paint. Road salt claimed that one.

I had a buddy with a clapped out MGA. He gave me a lift home from school. I went to grab my books from the floor and those books and the floor were gone. No homework that night. I'm surprised I didn't lose a foot. I knew a fellow whose dad got him a car - he traded a case of beer for a Ford Pinto, the one with the exploding gas tank.

I had a buddy with a clapped out MGA. He gave me a lift home from school..

MGA!
The twin cam or the BMC version?
Either is worth mega bucks now.

Nearest I can come to beaters is a 59 Ford pick up, no power steering or other luxuries.
I pulled out the tie rod ends trying to steer it one morning at -35 in PG.

I have to go back to the mid-60s, TB, but I think it was a twin cam. If I had everything today I had back then, I'd be rolling in mega bucks too. 59 Ford. I remember them.