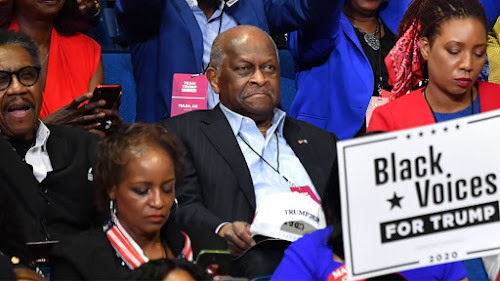 Herman Cain listened to Donald Trump. He was a fan. He supported the Mango Mussolini. Herman Cain was the co-chairman of Black Voices for Trump. But Herman has left the Trump campaign. He's dead.

Cain was a vocal opponent of wearing masks to thwart the spread of Covid-19.

The last time most people saw him was at the Trump Rally in Tulsa, Oklahoma, where he waived to the cameras in the midst of a densely packed crowd of people, not a mask to be seen among them. That was June 20, 2020. On June 29, Cain tested positive for Covid-19. Two days later he was admitted to hospital in Atlanta. On July 30, Cain died of Covid-19 complications.

Herman Cain seemed to drink Trump's Kool-Aid. He paid for it with his life.

Donald Trump, by the way, says he doesn't think his loyal supporter contracted the virus at Tulsa. Says president "I don't take responsibility at all" Trump.

43% Americans approve of Trump ( enough to re elect him)
Kool Aid is readily available in the US.