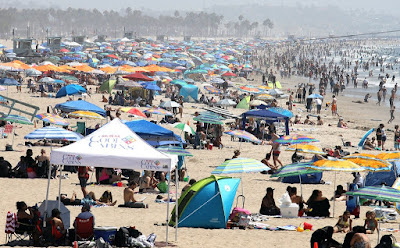 California has been making headlines for the resurgence of the Covid-19 virus. And for this year's wildfires that eclipse the devastating wildfires of previous years. And the heat, what about those heatwaves, huh? Brutal. And rolling power outages to keep the demand for air conditioning from overwhelming the grid.

It's time for another one of those horrible heatwaves. From the Washington Post:

The heat wave is forecast to be even more intense than an extreme event in mid-August that played a key role in contributing to the massive blazes that have burned 1.5 million acres so far — raising a new term, the “gigafire” — concentrated around the San Francisco Bay area.

Studies show that human-caused climate change is tilting the odds in favor of more frequent, severe and longer lasting heat waves, as well as larger wildfires throughout large parts of the West. New research published last month, for example, shows climate change is tied to more frequent occurrences of extreme-fire-risk days in parts of California during the fall (meteorologists define the fall as beginning on Sept. 1).

No respite from the cooling Pacific either. As the surface heats inland it is creating high pressure "heat domes."  At the coast these create offshore winds that block cooler ocean air from coming onshore. It's like an invisible oven.


Temperatures on Sunday are forecast to be about 20 degrees above average across the Los Angeles area, with temperatures reaching the triple digits all the way to the coast. Temperatures in the 100s will also encroach on San Francisco, with only minor relief from the typical cooling winds off the Pacific confined to areas right along the immediate shore.

In Sacramento, the NWS is forecasting a high of 102 degrees on Saturday, and 110 on Sunday.

The photo above is from the NYT. It shows the beach at Santa Monica yesterday packed with people trying to escape the heat. It sure doesn't seem that social distancing is on anyone's mind. Madness ensues.

Further north, the weather service is hoping that offshore winds will bring a dense blanket of wildfire smoke over San Francisco to provide a little heat relief.  Wildfire smoke. Loads of PM2.5 particulates.


PM2.5 enters the human lungs via respiration and adheres to the lung epithelium. Part of the PM2.5 inhaled cannot be removed by the lymphatic system and enters the blood circulation via diffusion. Then, the inhaled PM2.5 goes into the heart, kidneys, and other organs.

Readers of this blog will be familiar with my conjecture, based on plentiful scientific studies and analyses, that this decade, the 2020s, will see many climate emergency impacts but extreme heating will likely be foremost.  Fortunately Canadians enjoy a latitudinal buffer but we will have front row seats and it could be horrid.

As if they didn't already have enough problems, the world's poor will take it in the neck. A few weeks ago the New York Times published an interactive piece, Here's What Extreme Heat Looks Like: Profoundly Unequal.  The world's poor are already beset by the pandemic, by food insecurity, a lack of reliable access to fresh water so essential for hydration, cooking and hygiene, and now inescapable extreme heat. Each of these threats compounds all the others.

I wouldn't worry about those beachgoers. According to the current White House occupant, "when it gets a little warmer [the virus] miraculously goes away."

Well, if Donald says it, it must be so. What a relief!

"Fortunately Canadians enjoy a latitudinal buffer but we will have front row seats and it could be horrid."

Our leaders are not prepared for this in any way. It's going to come as an huge surprise. We are likely to see a major assault on our borders from climate refugees and top of the list will be so called middle class Americans. Canada, for most Americans, is either non-existent or theirs.

We have to stop mining the tar sands and we have to stop fracking. Our leaders don't even have the courage to stop subsidizing coal, oil and gas extractors.

Toby, I too worry that our leaders are not prepared. I read Owen's piece today on Kevin Page's essay. It struck me that we're likely to shape policy based on our Covid-19 experience. This is akin to the trap generals fall into when they use a period of peace to prepare to fight the last war. Then, when the old reality does not recur they're left wrong-footed, scrambling desperately to catch up.

The science types have warned us that we might have to deal with a cascade of emergencies. It would be unreasonable to expect any government to respond effectively to everything. Efforts might have to be allocated according to which will do the greatest good. It's a "Sophie's Choice" predicament. The public needs to know that governments understand this predicament and they need government to win their confidence that they will make the hard decisions in the best interests of one constituency only - the public good.

You'll be familiar with me quoting Churchill about how, in dire emergencies, "Sometimes it is not enough that we do our best. Sometimes we must do what is required." It is one thing to make tough calls when you enjoy the confidence of the public. It's a guaranteed disaster if you act without the public trust.