Krugman Looks at Trump, Sees the Ghost of Joseph Stalin 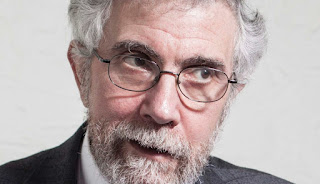 Like Stalin, he sees vast, implausible conspiracies everywhere — anarchists somehow in control of major cities, radical leftists somehow controlling Joe Biden, secret anti-Trump cabals throughout the federal government. It’s also notable that those who work for Trump, like Stalinist officials, consistently end up being cast out and vilified — although not sent to gulags, at least not yet.

And Trumpism, like Stalinism, seems to inspire special disdain for expertise and a fondness for quacks.

On Wednesday Trump said two things that both, if you ask me, deserved banner headlines. Most alarmingly, he refused to commit to a peaceful transition of power if he loses the election.

But he also indicated that he might reject new guidelines from the Food and Drug Administration for approving a coronavirus vaccine, saying that the announcement of these guidelines “sounds like a political move.” What?

OK, we all understand what’s going on here. Many observers worry that the Trump team, in an effort to influence the election, will announce that we have a safe, effective vaccine against the coronavirus ready to go, even if we don’t (and we almost certainly won’t have one that soon). So the Food and Drug Administration was trying to reassure the public about the integrity of its approval process.

And we really need that reassurance, because the Trump administration has given us every reason to distrust statements coming from public health agencies.

Last month the Centers for Disease Control and Prevention issued new guidance to the effect that people exposed to the coronavirus but not having Covid-19 symptoms didn’t need to get tested — contrary to the recommendations of just about every independent epidemiologist. Subsequent reporting revealed that the new guidance was prepared by political appointees and skipped the scientific review process.

More recently, the C.D.C. warned about airborne transmission of the coronavirus — this time matching what experts are saying — only to suddenly pull the guidance from its website a few days later. We don’t know exactly what happened, but it’s hard not to notice that the retracted guidance would have made it clear that recent Trump rallies, which involve large indoor crowds with few people wearing masks, create major public health risks.

So the F.D.A. was trying to assure us that it won’t be corrupted by politics the way the C.D.C. apparently has been. And Trump basically cut the agency off at the knees; his assertion that the new guidelines sound political actually meant that they weren’t political enough, that he wants to keep open the possibility of announcing a vaccine as a way to help retain power.

But if political hacks are calling the shots at the C.D.C., and the F.D.A. is being told to shut up and follow the party line, who’s advising Trump on pandemic policy? Send in the quacks.

Trump’s disastrous push, back in April, for early reopening was reportedly influenced by the writings of Richard Epstein, a law professor who somehow decided that he was an expert in epidemiology and that Covid-19 would kill no more than 500 people, a number he eventually increased to 5,000 — roughly the death toll we’re currently experiencing every week.

But the quack of the moment is Dr. Scott Atlas, a radiologist with no expertise in infectious diseases who nonetheless impressed Trump with his appearances on Fox News. Atlas’s opposition to mask requirements and advocacy of just letting the coronavirus spread until we’ve reached “herd immunity” are very much at odds with what actual epidemiologists are saying, but they’re what Trump wants to hear, and Atlas has apparently become a key adviser on pandemic policy.

That’s what had me thinking about Trofim Lysenko. Like Stalin, Trump denigrates and bullies experts and takes advice on what should be scientific issues from people who don’t know what they’re talking about but tell him what he wants to hear.

And you know what happens when a national leader does that? People die.

Meanwhile, the New York Daily News has taken off the gloves, with a piece entitled, "Say it plainly: Trump is a psychopath."  I know, that conjures up a 'tell us something we don't know' reaction but it is a venerable New York paper (101 years) with a solidly centrist reputation.

Very appropriate piece, Mound. Most of us have realized, for some time now, that he is a prolific liar, we now have some pretty good examples to be able to say he is also a genuine "wacko" to boot!

I fear for our neighbours to the south, and if does manage to hi-jack the presidency again, there could be a run on applications for Canadian citizenship from those US citizens who don't see much of a future for themselves in the "bestest, mostest democracy in the whole wide world".

In the meantime, keep that border closed, even if I can't see my granddaughter for the foreseeable future.

Even though Trump is a psychopath, the crew that surround him are busily dismantling the government and restructuring it to their libertarian desire. They know who he is and are using him. Does he know that? Probably. Maybe he sees threats in those with competency.


All we can do, Lulymay, is hope the American people come to their sense in November. If they don't or if the election result is manipulated, then we need to rethink Canada's relationship with our neighbour. The Swiss went along to get along and, in some ways, we're just as vulnerable as they were during the war.

Those who would manipulate Trump know full well the power of flattery over a malignant narcissist. Pump him up, cast him as the Great Man, and you can get a lot out of him. The one I fear above all others is Stephen Miller, Trump's very own Rasputin.

I don't see those comparisons. Stalin was evil but competent. Trump is evil but incompetent. In comparison, Trump is closer to Yeltsin, who left post-Soviet Russia in ruins paving the way for someone like Putin.

If Biden wins election, then that'll simply be another 4 to 8 years of another Bush/Obama administration. Which is terrible, but at least it's not completely incompetent. (Then again, Biden is pretty god damned awful. He's basically the architect for today's politics: author of the '94 crime bill; wartime profiteer; fracking enthusiast; Wall St. sycophant; central to the appointments of much of the current makeup of the Supreme Court.) He's the best of a bad duo, so hopefully Americans choose him: better the devil you know than the one you don't, sort of reasoning.

In all honesty, I see American politics being in flux for the next decade. Much pushing and pulling in any direction. Right now, it's the alt-right's turn at the rudder, but progressives could really carve themselves out an opening in the Democratic Party leadership. They almost won the nomination, but the neo-liberals tipped it back towards themselves. But much of the neo-liberal leadership in the Democratic Party is old. 75+ years. Who's up next for them? Kamela Harris? She won exactly 0 primaries. Pete Buttigieg? He won 1 primary, and that one's in bitter dispute (my guess is progressives will work to take over the election process in Iowa as well as in many other primary battlegrounds).

In all honesty, this should hopefully be the last kick at the can for neo-liberalism. They can't be allowed to tip the next Democratic Party primary. If the choice is between Trump faux-populism and real populism, I know which would win, and pretty handily at that.