The Left Coast Isn't All Blue 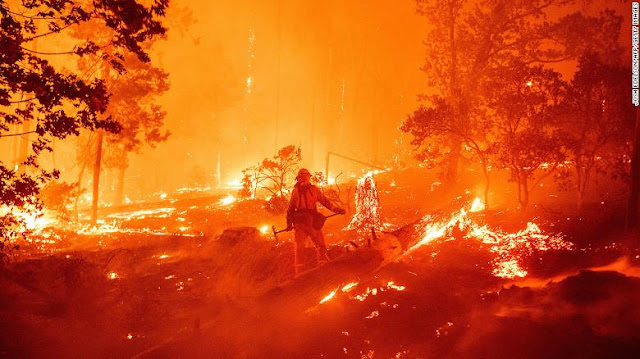 While the western states are predominantly Democrat-leaning, Republicans control a lot of territory in the central and eastern regions. That includes parts of Oregon currently beset by wildfires.

The state of Oregon says it's bracing for heavy loss of life. Some 500,000 have left the fire zone but an undetermined number are known to have stayed in their homes. Why?

In preceding days, Facebook pages associated with the town were filled with rumors of looters and Antifa raids. On its Facebook page overnight, Molalla police were forced to amend an earlier call for residents to report suspicious activity.

“This is about possible looters, not antifa or setting of fires,” the edit read. “There has been NO antifa in town as of this posting at 02am. Please, folks, stay calm and use common sense.”

The effects of this disinformation were dangerously evident on the ground.

On Thursday afternoon, three journalists were confronted by men with AR-15s and summarily ordered to leave Molalla. One of them, Sergio Olmos, who was on assignment for Oregon Public Broadcasting, said that the orders were given by the men – apparently civilians – without explanations or identification.

Further afield, other men with similar sympathies appeared to be on patrol. Although few vehicles were left in Mulino save those belonging to emergency services, on the trip there and again on back roads en route to Oregon City, men in trucks bearing thin blue line flags – a badge of membership for rightwing movements – were observed in states of hypervigilance. Some appeared to be noting the faces and number plates of passersby.

Who is behind the fear mongering that led Oregonians to lose their lives? Not any BLM protesters, not Antifa demonstrators. It was the radical right's doing. White nationalists, gun-toting rednecks.

BBC was talking about this. It sounds awful.

When you ask who is behind the fear it is probably those who will profit by it. Top of the list has to be the gun industry. Every crisis, no matter what, sends Americans flocking to their favourite gun stores.

There are several players who have motives to do this, Toby. This time it seems to be the radical right exploiting it to stoke fears and division.

I am so glad we divested ourselves of any assets we had in the US, Mound. Even completely cleaned out the bank account and brought it home in US cash! Problem is, by the time Trump gets finished exploiting the Pandemic and any who don't believe in his brand of "democracy", my 2 grand probably won't even buy me a bottle of wine at Two Buck Chuck's!


Lulymay, I sense that you share my queasiness, the inescapable uncertainty of how far this can fall, where is the bottom, what lurks there?