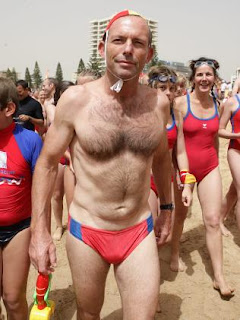 Abbott, an ultra-conservative Catholic, has strange ideas that now extend to what to do with old people in the age of Covid-19. Abbott's view is that they're just going to die from something or other anyway, so why waste money on hospital bills when we can  leave them home to die.


He claimed it was costing the Australian government as much as $200,000 (£110,000) to give an elderly person an extra year’s life, substantially beyond what governments would usually pay for life-saving drugs.

Abbott said not enough politicians were “thinking like health economists trained to pose uncomfortable questions about the level of deaths we might have to live with”. More politicians should have asked whether the cure was proportionate to the disease.

The kids know best. It should be their call.


“In this climate of fear it was hard for governments to ask ‘how much is a life worth?’ because every life is precious, and every death is sad, but that has never stopped families sometimes electing to make elderly relatives as comfortable as possible while nature takes its course.”

The kids, hmm. Oh yeah, the heirs. They wouldn't speed old mum on her way, would they?
Posted by The Mound of Sound at 11:52 AM

He is something. Must've learned it in the seminary. Wait a second. Jason Kenney also attended seminary.

Jason kenney attended seminary? When? Not mentioned in his Wikipedia bio. He got his very own twisted BS petition at the Jesuit University of San Francisco rejected by the local archbishop, and left in a huff. Because jason is always correct in his crazed mind and no damn archbishop is going to tell HIM off! No siree. He is a original piece of shite with nobody to blame for his warped mind but his own wacko fantasies. Having seen Trump making out with the lumpenproletariat goon squads in places like Portland, no wonder kenney wants to scrape up racists from rural Alberta to make his own militia.

As for Aussie righ wing attack dogs like Abbott and the idiot PM Morrison they now have, remember that Orstralia has been an even better lap dog of the US than we have. Murdoch the man of zero ethics hails from there and runs Fox "News" for kicks and profit. When PM Gough Whitlam showed signs of independent life back in 1975 and wanted to end US bases there, it took only a few days for the UK and US to depose him - the governor-general handed him his cards. Be like Boris the Bozo getting Payette to dismiss Twinkletoes after pressure from Trump. The Queen didn't stop the Brits in 1975 and probably wouldn't go against Johnson now.

I might have been wrong on Kenney, BM. He attended the St. Ignatius Institute, an undergraduate programme at the Jesuit, University of San Francisco. I had understood that to be a programme of religious indoctrination akin to a seminary.

Have you ever heard of the Sydney Ducks? They were California's first street gang, made up of English convicts who escaped from Australia and made their way to San Francisco in the mid 1800s. They were into all manner of things - kidnapping, extortion, arson.

He attended the St. Ignatius Institute, an undergraduate programme at the Jesuit, University of San Francisco.

He must have missed many classes!

The current Pope is of a very different opinion of life.

So many preach religion whilst putting their faith in accumulating wealth and power.

While I'm not RC, I have taken at least three courses from Jesuits and found them among the best professors I had. Francis, of course, is from that Order. After those courses I understood why Jesuits were often in trouble with the Vatican.

Pity we don't have presenters like that on the CBC.

Thanks for that, Cap. Did she take him to pieces. Do you remember Patrick Watson? He was in the top drawer for Canadian broadcast news. Even though CBC was enormously kind to me until I completed law school, I came to shun Mother Corp around the time Mansbridge took over. Having worked mainly in radio I was excited to be "promoted" to television news but I soon regretted the move. Of the two, radio was the far superior medium. The content was better. The ability to engage the audience was vastly better. You weren't working with eyes but only with ears - the brain.

It's easily been a couple of decades since I gave up on Canadian television news. There are so many fine newspapers and newsmagazines online that TV news is a waste of valuable time. I do, however, periodically catch BBC.

Coming from Murdochs Sky News that was darned good.
As for Tony's expertise in trade is the UK going to promote coal again?

I agree that radio has been and continues to be best. Kennedy is looking to do away with CBC in AB but will he
keep French Station. Anyong