How Dangerous Have Our Governments Become? 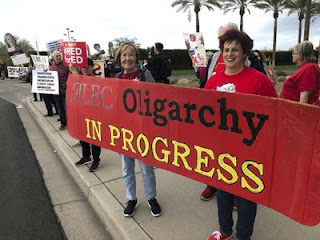 "The squeaky wheel gets the grease." If there was ever an area where that adage is unhelpful it is probably climate change.  Yet it remains our governments' standard operating procedure and we may pay dearly for that.

Climate change scares the hell out of most of us but that is only those aspects of climate change we comprehend. As Homer Thomas-Dixon in his book "Commanding Hope" observes, humanity has an imperfect grasp of the climate emergency. What we see may scare us (and 'denial' is usually rooted in  fear) but what we see is akin to the tip of an iceberg. It's the smallest part. We don't see what's underwater but that doesn't make what we can't see any less real, any less dangerous.

So imperfect is our ability to see what lurks just beneath the surface that we routinely support industries and developments harmful to the public good.

"Because the prices of fossil fuels ...don't currently reflect the harm those fuels inflict on the climate and the well-being of current and future generations, they're still relatively cheap compared to less dangerous alternatives such as electricity from the sun or wind.  ...Likewise, because the prices of robots used in manufacturing don't reflect the broader social costs of the job losses the devices cause, manufacturers have less cause to invest in other ways of boosting their output that would use more labour.

"It's a grim reality today that many of humanity's emerging global problems - like climate change and biodiversity loss - produce the conditions for market failure in stunning abundance. These problems spill across geographic and political boundaries, so they don't fall within any country's markets or regulations.   And they tend to affect public goods or complex resources like Earth's atmosphere for which it's extraordinarily hard (perhaps happily) to establish property rights - something that would push profit-driven corporations to take an interest. So good solutions to such problems are woefully undersupplied."

"...the actions of vested interests create a broad bias in societies toward stasis, tending to strengthen already entrenched structures of social power and reinforce already dominant sets of worldviews, institutions and technologies (WITs). These groups generally use every tool available - legal and, sometimes, illegal - to defend the benefits they derive from the existing ways of doing things. They exploit people's fears and ...torque governments into maintaining streams of subsidies and regulatory advantages.  Too often, when it benefits them, they promote lies.."

"The actions of vested interests degrade the quality of governments' solutions to problems and make anything but incremental change almost impossible."

Like the way we perceive the iceberg, we only see the tip of government, not the hazardous aspects that lie just beneath the surface.  When government says "we can't" it often means "we won't." Our partners, these 'stakeholders', might object.  Little steps, little steps, be patient.

This was the thrust of Churchill's admonition that "Sometimes it is not enough that we do our best. Sometimes we must do what is required." Doing what is required does not come naturally to our governments - Conservative, Liberal or New Democrat. Their basic instinct is to drag their heels until we're dead. It beats doing "what is required."

The squeaky wheel gets the grease and in the context of the future of our country and our governments' abject failure to intercede on behalf of future generations, the squeaky wheel is the vested interest they go to such lengths to accommodate.

Dangers loom and most of our best options slipped through our fingers years ago. We can no longer afford these vested interest "cut outs" between the public and their elected representatives. We're already paying a price for that and it's becoming unbearable.

It's curious, isn't it Owen, that government simply cannot do what is expected of all of us every day of our lives. There are obligations that we must meet, lines that must not be crossed and we don't give them a second thought. Some are mundane, others are critical, but in all such matters we do what is required.

Politicians invented the nonsense about government being the art of the possible. It gives them a supposed out when they fail to do what is required.