What Antifa Teaches Us About Grooming 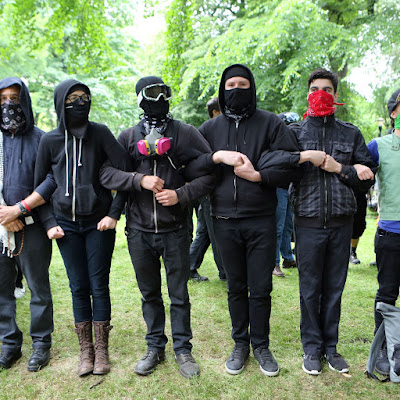 The American people have been groomed to believe no end of horseshit. Here's an example. Two years after George W. Bush went on TV to admit that Saddam Hussein had no weapons of mass destruction, more than 60 per cent of Fox viewers were convinced that WMDs had been found.

Team Trump, however, routinely denounce Antifa as the source of domestic unrest. By now the American people have been barraged with outright lies about this sinister, violent insurrection in their midst.  I finally decided to do a bit of digging because I suspected this was all one giant, vile lie. It was another example of how easy it is to groom a lot of Americans to swallow grade A, bluegrass horseshit.

The Center for Strategic and International Studies, CSIS, describes Antifa as a loose gathering of people who consider themselves anti-fascists.

Are they the bad boys of recent confrontations with alt.right and white supremacist groups?


While it is difficult to assess with fidelity the identity or ideology of many of the looters, my conversations with law enforcement and intelligence officials in multiple U.S. cities suggest that Antifa played a minor role in violence. The vast majority of looting appeared to come from local opportunists with no affiliation and no political objectives. Most were common criminals.

The threat from Antifa and other far-left networks is relatively small in the United States. The far-left includes a decentralized mix of actors. Anarchists, for example, are fundamentally opposed to the government and capitalism, and they have organized plots and attacks against government, capitalist, and globalization targets. Environmental and animal rights groups, such as the Earth Liberation Front and Animal Liberation Front, have conducted small-scale attacks against businesses they perceive as exploiting the environment. Antifa followers have committed a tiny number of plots and attacks.

Truth has never been a concern of Donald Trump. He has recently blamed Antifa for protest violence.


“The memory of George Floyd is being dishonored by rioters, looters and anarchists. The violence and vandalism is being led by antifa and other radical left-wing groups who are terrorizing the innocent, destroying jobs, hurting businesses and burning down buildings.”

— President Trump, in remarks at a SpaceX launch, May 30

“I don't see any indication that there were any white supremest groups mixing in. This is an ANTIFA Organization. It seems that the first time we saw it in a major way was Occupy Wall Street. It's the same mindset.” @kilmeade @foxandfriends TRUE!”
— Trump, in a tweet, June 1

“Our nation has been gripped by professional anarchists. Violent mobs, arsonists, looters, criminals, rioters, antifa and others.”

— Trump, in remarks at the White House Rose Garden, June 1

“We have antifa, we have anarchists, we have terrorists, we have looters. We have a lot of bad people in those groups. I mean, you watch and you see.”

A fact-checking investigation by the Washington Post found that Trump is, once again, blowing smoke up his followers' backsides.


Antifa is a moniker, not a single group with a clear organizational structure or leader. It is a decentralized network of activists who don’t coordinate. Their common ground is opposing anything that they think is racist or fascist. In recent years, antifa activists appeared whenever there was a large gathering of white nationalists.

And white nationalists, as counterintuitive as it might seem, have been known to attend Black Lives Matter rallies. That is what could then draw attention from antifa forces, according to Seth G. Jones, director of the transnational threats project at the Center for Strategic and International Studies.

Oren Segal, vice president of the Center on Extremism at ADL, emphasized, “It’s a challenge [to identify antifa] because this is not an organized group. You’re essentially looking to try to identify what does somebody believe in.” Antifa has been identified by patches, flags, graffiti and black clothing, Segal explained. And at times, they can be identifiable by moving in “black bloc” formation. But, Segal hedged, looking to identify antifa by these visual cues is “not foolproof.”

Jones reviewed protests in more than 140 cities and spoke with U.S. officials within the joint terrorism task force. Most of the violence, Jones said, was committed by “local hooligans, sometimes gangs, sometimes just individuals that are trying to take advantage of an opportunity.”

“There were reports of some antifa at different protests,” he concluded. “But they stood back, did not engage, certainly not in a violent way.”

Roughly 80 federal charges, including murder and throwing molotov cocktails at police vehicles, reveal no evidence of an antifa plot. Four people who identify with the far-right extremist “boogaloo” movement are among those facing the most serious federal charges. Asked whether anyone who identifies as antifa had been charged, Department of Justice spokesman Matt Lloyd said via email, “We do not collect statistics based on potential inspiration but on unlawful acts according to statute.”

The Nation revealed a separate FBI document that said the bureau found “no intel indicating antifa involvement” in the May 31 protests in Washington. (A woman was arrested after the Portland violence and the probable cause document quoted roommates as saying she said she was part of antifa. But the charges were dismissed and the case is closed.)

Trump and the radical right - hand-in-glove


“There was a concerted effort by alt-right activists not just to conflate the protest with antifa, but to get antifa declared a terrorist organization by the president of the United States,” Brooking said. “We see that there was a coordinated, essentially, series of petitions, an online lobbying effort.”

By May 31, mentions on Twitter reached almost 3.9 million, search interest in “antifa” spiked and Trump tweeted that he would declare it a terrorist organization — although he has no authority to do so under the law.

In July, The Guardian tallied right wing and left wing violence in America.


A new database of nearly 900 politically motivated attacks and plots in the United States since 1994 includes just one attack staged by an anti-fascist that led to fatalities. In that case, the single person killed was the perpetrator.

Over the same time period, American white supremacists and other rightwing extremists have carried out attacks that left at least 329 victims dead, according to the database.

...Attacks inspired by the Islamic State and similar jihadist groups, in contrast, killed 95 people since 2010, slightly fewer than rightwing extremists, according to the data set. More than half of these victims died in a a single attack on a gay nightclub in Orlando, Florida, in 2016.

Heidi Beirich, a co-founder of the Global Project Against Hate and Extremism, said some leftwing groups were known for more radical and violent tactics in the 1960s, adding: “It’s just not the case today.”

“Antifa is not going around murdering people like rightwing extremists are. It’s a false equivalence,” said Beirich.

“I’ve at times been critical of antifa for getting into fights with Nazis at rallies and that kind of violence, but I can’t think of one case in which an antifa person was accused of murder,” she added.

Finally, Trump has an antifa supporter who killed a rightwing agitator at a Portland protest on August 29.  There is a video of the shooting and, although Reinoehl told Vice News that he fired in self-defence, there's no clear evidence of that in the video.  Reinoehl was killed by police two nights ago.

So, since 1994 that makes the tally 329 deaths caused by America's radical rightwing extremists to 1 death by antifa.  Every killing is a tragedy, a stupid expression of brutality, but 329 to 1 speaks for itself - unless it is Donald Trump or Bill Barr or one of Trump's other White House monkeys talking.

I would bet that Jason Kenny's war room can expose Antifa!
TB

Every rightwing jackass does sooner or later, TB.

Yeah, you don't bring an assault rifle to exchange differences of opinion, Rumley.

This is a perfect example of the success a campaign of misinformation can achieve once a segment of the population is groomed to accept such nonsense. I think it is only fair to fault the mainstream media for failing to push back against this.