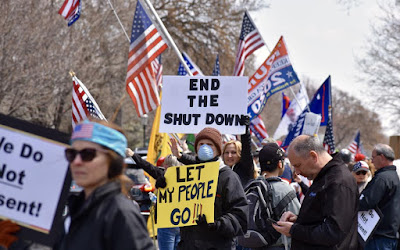 Donald Trump is shameless when it comes to praising his response to the Covid-19 epidemic. On the campaign trail he depicts his personal failures as an amazing success story, the envy of the rest of the world. He's banging the American exceptionalism drum for all it's worth.

That's not to say America isn't exceptional when it comes to the pandemic. It stands alone in the number of dead. The U.S. tally has now passed 200,000. No other country is even close. And the party may just be getting started.

With autumn on the horizon, when colder weather is likely to drive millions back indoors where the virus can spread more easily and with returning colleges acting as giant disease incubators, the US is poised for another rude awakening. There is simply no chance of containing the contagion when new cases are still running at about 35,000 a day.

In March, the early days, the Guardian spoke with Jeremy Konyndyk of the Center for Global Development who summed up Trump's pandemic performance as, “one of the greatest failures of basic governance in modern times”.

We went back to Konyndyk to ask how he sees it now as the country passes the devastating 200,000 deaths mark. “I think my analysis has borne out extremely well,” he said. “We’re on track to have a quarter-million dead Americans by the end of the year with absolutely no reason it had to happen. It was all preventable. So yes, this is a leadership failure of astounding proportions.”

We were warned, early on, that these pandemics usually arrive in waves. The second wave tends to be the deadliest. It's still unclear if we're in that second wave but a lot of the medical types suggest that's what we're seeing with these renewed surges in Europe, Canada and, especially, the United States.

The Brits are now nearing 4,000 new cases a day. The UK's two top pandemic experts, chief medical officer, Chris Whitty, and chief science adviser, Sir Patrick Vallance, say the infection doubling rate is a mere seven days. They estimate the infection rate could reach 50,000 new cases a day by mid-October. They add that, while the second wave began with mainly young people being infected, the group with the lowest mortality rate, it has now, as predicted, spread to the more vulnerable older groups.

Trump, meanwhile, is struggling to cling to power. This is a guy who'll say anything about anything as long as it flatters him. That's how 200,000 dead are recast as an amazing success story. That's why he promises an effective vaccine is just around the corner, ready to roll out to the masses. It's nonsense of course but that doesn't matter. All that counts now is about six weeks away, November 3.

Trump tells the Gullibillies that Canadians are clamouring for the border to re-open. I haven't met that person yet, have you?

I think the only reason Ms Rempel Garner MP brought her sorry assed hissing back to Canada eh was she was about to violate her visa. seems she went through a time tunnel with Toto or rabbit hole and clambered into Parliament to cry and whine

The Trump insult got Romney's attention.. at this point only Romney has called the vague evasions of Trump & Ms McNsomethingother what it is.. and good on him. Meanwhile.. up here where the buffalo and Ms Rempel roam.. Kitty bar the door should be our war cry.. and get those American customs agents off our land ! Like now ! Toute Suite pronto !

Trump et al is DISASTERVILLE for Canada.. Bad Medicine.. I see no positive outcome.. even with a crushing Biden win

On another note.. your 'tipping point - cascade articles are most excellent. I favour the 'cascade' term' due to vast medical exposure to the term and case histories.. They're a killer in hospitals or crisis.. but 'tipping point' is such an accurate terms as well.. Cascade in medicine is somewhat finite - predictable consequence.. tipping point seems more Pandora unleashed and nobody knows what may happen.. Explosive Randomness