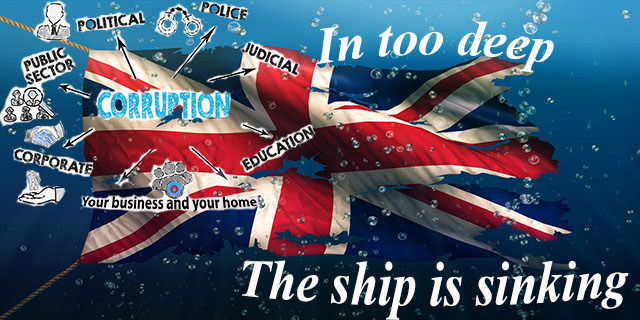 George Monbiot claims, when it comes to corruption, The City (as London is known) takes second place to no one.

When you connect the words corruption and the United Kingdom, people tend to respond with shock and anger. Corruption, we believe, is something that happens abroad. Indeed, if you check the rankings published by Transparency International or the Basel Institute, the UK looks like one of the world’s cleanest countries. But this is an artefact of the narrow criteria they use.

As Jason Hickel points out in his book The Divide, theft by officials in poorer nations amounts to between $20bn and $40bn a year. It’s a lot of money, and it harms wellbeing and democracy in those countries. But this figure is dwarfed by the illicit flows of money from poor and middling nations that are organised by multinational companies and banks. The US research group Global Financial Integrity estimates that $1.1tn a year flows illegally out of poorer nations, stolen from them through tax evasion and the transfer of money within corporations. This practice costs sub-Saharan Africa around 6% of its GDP.

The looters rely on secrecy regimes to process and hide their stolen money. The corporate tax haven index published by the Tax Justice Network shows that the three countries that have done most to facilitate this theft are the British Virgin Islands, Bermuda and the Cayman Islands. All of them are British territories. Jersey, a British dependency, comes seventh on the list. These places are effectively satellites of the City of London. But because they are overseas, the City can benefit from “nefarious activities … while allowing the British government to maintain distance when scandals arise”, says the network. The City of London’s astonishing exemption from the UK’s freedom of information laws creates an extra ring of secrecy.

The UK also appears to be the money-laundering capital of the world. In a devastating article, Oliver Bullough revealed how easy it has become to hide your stolen loot and fraudulent schemes here, using a giant loophole in company law: no one checks the ownership details you enter when creating your company. You can, literally, call yourself Mickey Mouse, with a registered address on Mars, and get away with it. Bullough discovered owners on the Companies House site called “Xxx Stalin” and “Mr Mmmmmm Xxxxxxxxxxx”, whose address was given as “Mmmmmmm, Mmmmmm, Mmm, MMM”. One investigation found that 4,000 company owners, according to their submitted details, were under the age of two.

By giving false identities, company owners in the UK can engage in the industrial processing of dirty money with no fear of getting caught. Even when the UK’s company registration system was revealed as instrumental to the world’s biggest known money-laundering scheme, the Danske Bank scandal, the government turned a blind eye.

...Processing everyone else’s corruption is the basis of much of the wealth of this country. When you start to understand this, the contention by the author of Gomorrah, Roberto Saviano, that the UK is the most corrupt nation on Earth, begins to make sense.

These activities are a perpetuation of colonial looting: a means by which vast riches are siphoned out of poorer countries and into the hands of the super-rich. The UK’s great and unequal wealth was built on colonial robbery: the land and labour stolen in Ireland, America and Africa, the humans stolen by slavery, the $45tn bled from India.

Isn't inequality a product of corruption, Toby. Joseph Stiglitz, America's greatest expert on the subject, argues that very little inequality is either market- or merit-based. It is a legislated outcome enacted for the benefit of special interests to the detriment of the public by the very same individuals we elect to office. They don't even flinch.

Agreed. Inequality is a product of corruption, frequently legislated. Unfortunately, the rich have much more than their share of access to political and bureaucratic power. The rich employ lobbyists to hammer on the right doors daily; the rest of us can't afford it.

With Boo-boo running the UK and 56 people owning most of the land in Britain, do people have to wonder if the UK is one of the most corrupt countries in the world...?