"Twice as Bad" - What Does That Even Mean? 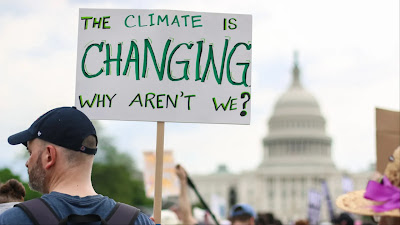 The consensus is that the changes that we're experiencing - the wildfires, severe storm events, devastating droughts and floods - they're here to stay. There's no going back.

“It’s as if we’ve been smoking a pack of cigarettes a day for decades” and the world is now feeling the effects, said Katharine Hayhoe, a climate scientist at Texas Tech University. But, she said, “we’re not dead yet.”

Their most sobering message was that the world still hasn’t seen the worst of it. Gone is the climate of yesteryear, and there’s no going back.

The effects of climate change evident today are the results of choices that countries made decades ago to keep pumping heat-trapping greenhouse gases into the atmosphere at ever-increasing rates despite warnings from scientists about the price to be paid.

That price — more vicious heat waves, longer wildfire seasons, rising sea levels — is now irretrievably baked in. Nations, including the United States, have dithered so long in cutting emissions that progressively more global warming is assured for decades to come, even if efforts to shift away from fossil fuels were accelerated tomorrow.

“What we’re seeing today, this year, is just a small harbinger of what we are likely to get,” said Jonathan Overpeck, a climate scientist at the University of Michigan. Things are on track to get “twice as bad” as they are now, he said, “if not worse.”

"Twice as bad." What does that even mean?

Usually, each passing year’s records are framed by the past — the hottest temperatures ever observed, the biggest wildfires in decades. However, as Cristian Proistosescu, an assistant professor at the University of Illinois, noted on Twitter, it may be time to flip that chronological framing, and consider today the new starting point.

This echoes the theory of "climate departure" developed by Camilo Mora's research team at the University of Hawaii.

Climate change is more a slope than a cliff, experts agreed. We’re still far from any sort of “game over” moment where it’s too late to act. There remains much that can be done to limit the damage to come, to brace against the coming megafires and superstorms and save lives and hold onto a thriving civilization.

Managing climate change, experts said, will require rethinking virtually every aspect of daily life: how and where homes are built, how power grids are designed, how people plan for the future with the collective good in mind. It will require an epochal shift in politics in a country that has, on the whole, ignored climate change.

First, experts broadly agreed, if we want to stop the planet from relentlessly heating up forever, humanity will quickly need to eliminate its emissions of planet-warming greenhouse gases. That means cleaning up every coal plant in China, every steel mill in Europe, every car and truck in the United States.

It’s a staggering task. It means reorienting a global economy that depends on fossil fuels. So far, the world has made only halting progress.

Even if we start radically slashing emissions today, it could be decades before those changes start to appreciably slow the rate at which Earth is warming. In the meantime, we’ll have to deal with effects that continue to worsen.

“In terms of being reversible, I can only think of things in sci-fi films — Superman trying to spin the earth in the other direction so Lois Lane doesn’t die,” said Juan Declet-Barreto, a social scientist at the Union of Concerned Scientists. “Seriously, it is not reversible.

Again and again, climate scientists have shown that our choices now range from merely awful to incomprehensibly horrible.

If we cut emissions rapidly, about one-seventh of the world’s population will suffer severe heat waves every few years. Failure to do so doubles or triples that number. If we act now, sea levels could rise another 1 to 2 feet this century. If we don’t, Antarctica’s ice sheets could destabilize irreversibly and ocean levels could keep rising at an inexorable pace for centuries, making coastal civilization all but unmanageable.

The best hope is to slow the pace of warming enough to maintain some control for humanity.

“In our research, we’ve found that most systems can cope with a 1.5-degree or 2-degree world, although it will be very costly and extremely difficult to adapt,” said Dr. Hayhoe of Texas Tech University. “But in a 4-degree world, in many cases, the system just doesn’t work anymore.”

So, even as nations cut emissions, they will need to accelerate efforts to adapt to the climate change they can no longer avoid. “We need to figure out how to put ourselves less in harm’s way,” said Gernot Wagner, a climate economist at New York University.

We have to open our eyes, accept what is and what will be, and recognize that a crash landing is still better than a nose dive. That is still worth fighting for. It is absolutely worth the cost and sacrifice for it is life itself.
We can begin by learning to live with wildfires.

Going forward, experts said, the country will have to shift its mentality and learn to live with fire. States and communities will need to impose tougher regulations on homes built in fire-prone areas. Federal agencies will have to focus on managing forests better, selectively thinning some areas and even preventively setting controlled fires in others to burn off excess vegetation that can fuel runaway blazes.

“There’s a lot we can do,” said Jennifer Balch, a wildfire expert at the University of Colorado at Boulder. “We’ve just been stuck in an emergency response rather than thinking and looking ahead.”

Whether Americans can adopt that mentality remains an open question.

“We’ve often heard the argument that it will be too expensive to cut emissions and it will just be easier to adapt,” said Noah Diffenbaugh, a climate scientist at Stanford University. But we’ve now had decades of warnings, he said, “and we’re not even adapted to the present climate.”

There's a new group emerging, young people called the "doomers." There's an article in today's Guardian about them and it's disturbing.

Generation Z – the cohort born after 1996 – has the most at stake in the effort to save the environment. They’re often championed as Earth’s great hope, the young people whose optimism and activism will help reverse catastrophic climate change. But while teens and young adults protest in droves, some of their peers fear the cards are already stacked against them.

Sometimes called “doomers”, these deflated young people often insist that radical, systemic change is the only chance for salvation – but find it difficult to believe that the world will actually rise to the occasion.

“You’re not seeing people who are planning for the future, because the future seems so precarious and so unpredictable,” says Max Bouratoglou, a 19-year-old student in California, where 25 major wildfires are currently burning.

He believes “enormous devastation” is coming and that the world has accelerated toward “a climate singularity”.

Fortunately there's a large group of Gen Z that is pushing back.

“These young people are right that what is missing is political will, but that is something that we collectively have to create,” says Juanita Constible of the Natural Resources Defense Council Action Fund.

“Just throwing in the towel on that is consigning our current peers and future generations to a much more terrible future than is necessary.”

Plenty of Gen Zers are still optimistic about the climate crisis and recognize an inherent fallacy within doomism. “If it is a point of no return, we’re going down. But if we’re saying this, even though it might not be, it’s worth, like, putting in some effort to try and preserve our planet,” says Valentina Doukeris, an 18-year-old international student at a Chicago-based school.

Tim Joung, a 20-year-old student in New York, agrees with almost everything that so-called doomers believe: individual action makes little difference, and unscrupulous corporations are at fault for climate change. But he also thinks that society can push for stricter regulations on big polluters.

“If we do nothing, the worst is gonna happen,” he says. “If we at least do something, there might be a chance – maybe not now, but later down the line – for us to save as many people as we can.”

My suspicion is that the doomers are responding not so much to the looming climate threats as they are to the indifference they see in older generations, those who hold the levers of power. It's hard to imagine anything more dispiriting for an American 20-something than to have to watch their president dismantle their nation's environmental protection apparatus, give fossil fuel production every leg up, and then say he doesn't believe scientists. How would you feel if you were 20 and knew your life, your future was in this man's clutches?

We are in a world where "merely awful" is a win when measured against the alternative, "incomprehensively horrible."

Whether it's climate breakdown or over-population or excess consumption and waste, the solution comes down to the same imperative - humanity must retreat. We must live in harmony with nature. We've tried to harness nature to our will. Look where that has brought us.

Try to look at yourself as a doomer would see you.

It's hard to imagine what the world would be like if every nation's defence spending was pared by 75 per cent and that money redirected to projects and programmes that would directly benefit humanity. What's hardest for me to imagine is that we might somehow rise to that level of enlightenment.

Maybe this pandemic will become the solution to over population?