Why Are Americans So Terrified of Socialism Yet Crazy For Authoritarianism


Americans despise socialism, whatever they imagine that to be. They automatically conflate socialism with Communism and totalitarianism, the loss of their constitutionally guaranteed, democratic rights. It's the Freedumb Factor at large.

The contradictions suggest they don't have a clue about democracy or liberty. Does it bother Hayseed America that Wyoming, with a shrinking population of barely 600,000 should have the same clout in the Senate as California with 40 million people? California is 66 times bigger than Wyoming but both have two votes in the Senate. Wyoming is one of six states with populations smaller than one million.

Then there's the Electoral College where Democrats lose even if they win the popular vote.


If Mr. Biden wins by five percentage points or more — if he beats Donald Trump by more than seven million votes — he’s a virtual shoo-in. If he wins 4.5 million more votes than the president? He’s still got a three-in-four chance to be president.

Remember, Hillary won by 3 million votes and the Electoral College declared Trump president. And hasn't that worked out well?

The Republicans aren't interested in a head-up race. It's not enough that the Electoral College "spots" the GOP a multi-million vote edge. The Republicans are masters at various means to tilt the playing field to their advantage. 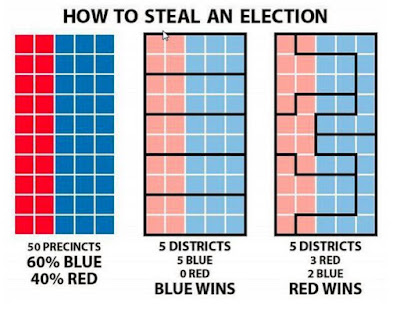 Gerrymandering is one. State officials use redistricting to corral Democratic voters into just a few districts. The remaining districts are then theirs. All they need is a slim majority to take those districts. In this way they can take the lion's share of the districts in their state with just a minority of the votes cast.

Voter suppression is another tactic. Make it harder to vote through identification laws. Knock legitimate voters off voting lists and force them to fight their way back on. Slash the number of polls in Democrat areas, forcing voters to wait in line for hours to cast a ballot.

Then, once you have screwed the Democratic vote, the Dems still need a 5 per cent lead to get past the Electoral College to win the White House. Is that anything that resembles democracy? Not even remotely.

And all of this is a struggle over a system of government that is already corrupted where the system of "checks and balances" has been neutralized. A "bought and paid for" Congress in service to special interests to the detriment of the public and national interest. A "stacked deck" judiciary that serves conservative interests to the detriment of the general interest. And now, the ultimate perversion, a Trump White House.

As professors Gilens and Page concluded in their 2014 paper, America has replaced the remnants of democracy with plutocracy.

In 2018, The Economist Intelligence Unit conducted a survey of global democracy that concluded less than 5 per cent of humanity live in a "true democracy."  Americans are not in that 5 per cent.

The very notion of America as a democracy is a myth. The United States was established as a Republic, not as a democracy, in which an elite was intended to rule over ordinary citizens.

In 2012, Live Science posted an analysis that claimed the United States has a 50-year revolutionary cycle.  Not knowing of the rise of Donald Trump the article predicted 2020 as the expected year of the next upheaval.

...Turchin explained that a surge of violence begins in the same way as a forest fire: explosively. After a period of escalation followed by sustained violence, citizens begin to "yearn for the return of stability and an end to fighting," he wrote in his paper. The prevailing social mood swings toward stifling the violence at all costs, and those who directly experienced the civil violence maintain the peace for about a human generation — 20 or 30 years. But the stability doesn't last.

As we emerged from the 20th century, many academics foresaw the 21st would be a century of revolution. Few, however, imagined that the United States could be among the nations swept up in it.


Setting aside prospects about revolutions, even the utopianism of the 19th century socialists (e.g. those of Owenites, Saint-Simonians, Fourierists) has vanished from the political imagination of the Global Left. It seems that efforts aiming at re-establishing the mid-20th century welfare states — which had provided some security to parts of the working class population in Global North at the expense of exclusion of billions of people in the Global South — has replaced both the utopian and revolutionary visions. That is why today it is much easier to imagine the end of the world than to imagine the end of capitalism and the existing world political order.

America is riven. Its government is detached from its people. Political capture begat regulatory capture and now, with Trump at the helm, even judicial capture is in place.

Political capture meant that regulated industries could stack regulating boards and bodies with their own representatives, giving them direct control over some vital governmental powers. What started with establishing influence progressed into control of some powerful bodies.
Throwing Trump out of office is not going to remedy these ills. They existed before he decided to seek the Republican nomination. It's no surprise that the private interest influence and control has consolidated under Trump's administration.

These are the conditions that attack the immune system of liberal democracies that, around the world, are in retreat and, in some cases, succumbing to authoritarian rule.  What will the American people choose?
Posted by The Mound of Sound at 11:43 AM

They do persist at it, don't they? It's probably related to religion, godless communists and all that.

I think that Trump will win the election by whatever means it takes.
I hope that Trump wins and brings the US to it's knees which is what it will take to have real change in a country that thinks Democrats are socialists.
The politics of millionaires and billionaires has to stop; they represent only themselves.

Toby, I was a child of the Cold War, the NATO v. WarPac era. We were taught in elementary school that capitalism and democracy were flip sides of the same coin. Against this the bad guys had Communism, a blend of state socialism and totalitarianism.

When I donned the blue barathea pf the RCAF I really believed I was defending Canada and my fellow Canadians from forces of evil. That and I really, really wanted to fly. Okay, it was mainly about the flying stuff.


TB, I think we've kicked this issue around before. You want Trump to take the US to its knees but I fear you haven't thought that through. You haven't explained what consequences could flow from that. "Could," not would.

There's a considerable range of potential outcomes. The impacts would be felt in every corner of the world, often quite differently. China and, to a lesser extent, Russia would obviously benefit. Europe would be destabilized. Latin America, Africa and Asia-Pacific would be plunged into turmoil from power vacuums and shifting hegemony.

Canada would be particularly hard hit as much from our refusal to prepare for such seismic event as anything else.

And what of the United States itself? The hillbillies, after all, have the greatest military machine in the history of mankind. What becomes of that? What about its sworn obligation to defend the Constitution against all enemies, foreign and domestic? If America was brought to its knees how would that impact a Lord of the Flies society? Christ, that country is unstable enough as it is now.

Tell me how you see these things playing out in your dream scenario.

The US has become a rogue state not so different from those it decries.
Last time I looked it was the US that was destabilizing the world!
Power is already transforming in Asia , Africa the middle east and Europe with or without US power and influence.
Maybe a defunct US will dispose of it's many weapons like the USSR did and sell them of to the highest bidder?


I think you're oversimplifying the outcome you champion, TB. Do you think it is the Americans who are destabilizing the South China Sea? Are the Yanks oppressing the Uighurs?

Please, define "defunct US." Let's have specifics. Do you want America's arsenal sold to the highest bidder? Would that make you feel more secure?

Trailblazer, you might want to look back at the comments to ‘is the culture war going hot?’ from last week; mound and I had some back and forth on that very sentiment (I share your opinion). I think there’s still a lengthy comment in the thread that hasn’t been upped yet, though.

The odd thing about the voter suppression is, the Democratic party seems decidedly uninterested in even trying to do anything about it. Much of the vote being suppressed is of course black people's votes, but I don't think it's that the Democrats are racist. No, the point is that nearly all of the vote being suppressed is poor people's votes, and the dollar-drenched Dems, even if they'll lose elections because of it, just can't bring themselves to work hard to empower those pesky poor people. If poor people went around voting, the wrong Democrats might get in during primaries!