The Appearance of Justice 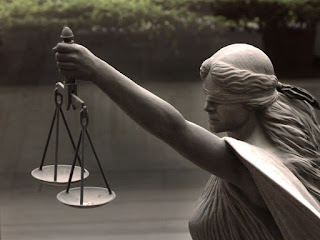 It is axiomatic that, in a liberal democracy, justice must be free from bias. Every human is a breathing bag of biases but those that judge us are bound to set theirs aside in the discharge of their duties.

It was almost a century ago, 1923, that the English court of King's Bench, Lord Hewart presiding, wrote that "It is not merely of some importance but is of fundamental importance that justice should not only be done, but should be seen to be done."

It is of fundamental importance that justice should be seen to be done. In many courthouses you will find, usually near the entrance or in the foyer, a statue of Themis. She is usually depicted holding the scales of justice in her upraised hand, the sword of justice in her other and she is blindfolded.  The scales are in balance, they're not rigged, and the blindfold ensures fairness, equality before the law.

In America today, Themis might more properly be seen as neither blind nor fair. 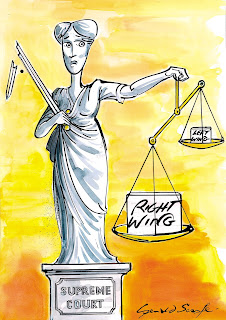 These values don't matter much in the United States. If they did, Republicans wouldn't gleefully boast about rigging their top courts by the appointment of judges chosen not for exceptional ability but for their partisan political reliability. They want a partisan court, not a court of justice. They want a court that sees and hears and embraces one side to the exclusion of the other. They want a court that will deliver predictable outcomes aligned to their political beliefs.

In a nation as deeply, angrily divided as the United States, stacking the superior courts with far rightwing judges is abominable. In the United States, already massively corrupted by a "captured" regulatory apparatus (regulatory panels dominated by individuals from the very industries being regulated) and a "bought and paid for" Congress beholden to the Big Donor class, the oligarchs, stacking the superior courts is a consummate act of corruption.

In today's New York Times, Kim Phillips-Fein writes that the appointment of Amy Coney Barrett would cement the Supreme Court as a court for America's wealthy and powerful. All hail the oligarchy!

With a 6-3 conservative court, the country is at risk of having the few remaining tools that permit some limits on the power of business — like labor unions and environmental legislation — weakened still further. The court’s future decisions could give corporations even more weight and workers less, by blocking potential legislation that might mitigate the impact of unfettered capitalism and staggering inequality.

As a federal appeals judge, Judge Barrett has often ruled in ways friendly to employers. She has joined rulings that stopped a case in which the U.S. Equal Employment Opportunity Commission objected to a company that allegedly assigned workers to particular geographic locations based on race and ethnicity and that limit the scope of laws prohibiting age discrimination.

You're unfamiliar with the Democratic principle: "The winner takes it all."

A proposal that I think makes sense is to have the Supreme Court operate the same way as do lower appellate courts. Start by tripling the number of judges on the court. Ordinary cases would be heard by a bench of nine selected at random. If need be, particularly important cases could be heard en banc. Set an age limit of 75, like Canada does, or cap the number of years of service, e.g. 20. That would make partisan court rigging much more difficult and ensure a greater turnover of judges.

Aren't local sheriffs and some local judges still elected in many states, Mound? After many winters in Arizona, I'm most familiar with their "Sheriff Joe" out of Phoenix that prided himself on demeaning any and all prisoners to the greatest extent possible. One time, I think it was bright pink uniforms he insisted prisoners working in the a local community wear so everyone would recognize who those "jailbirds" were.

In most small communities - at least in the one I stayed in - would not have survived without all that free labour they received on a daily basis were it not for those prisoners.

No, Thwap, I'm familiar with it. Liberal democracy tries to tame its excesses. PET's Charter of Rights and Freedoms worked to enshrine the limits of state power over the individual. It's the blood red fang and claw approach to judicial partisanship so openly pursued in the US that should give Americans pause.


The need for reform in American governance is urgent, Cap. The whole government of the people, by the people, for the people has been turned on its head. The partisanship now so rampant in the judiciary is consistent with the displacement of democracy by oligarchy. The Big Donor class not only hold the regulatory and legislative levers of power, why should they not have the judiciary on strings?

I've noticed more articles appearing over the past week asking whether this is it, is American democracy finally broken? It has been heading in that direction for at least the past couple of decades. Perhaps the country is too broken. Perhaps it's too late for reform.

You're right, Lulymay. It's commonplace for Sheriffs, judges and prosecutors to be elected. That really lends itself to mob rule.

It was when I used to visit my parents at their winter retreat in Florida that I first saw an actual 'chain gang.' The inmates were returning to their cells at the end of the day. The guards looked like they were straight out of Cool Hand Luke. At the gate, as each prisoner was unshackled, he had to remove his shoes for inspection and walk into the prison yard bare-footed.

Even in California, prison labour is a major source of forest fire-fighters. It's volunteer and they get paid a daily stipend but it's not much. The state is looking at a new pay/reward programme.

A few years ago I was riding my motorcycle through Michigan and needed directions so I detoured into the town of Gaylord. There was no one on the streets until I spotted a work crew ahead. I stopped and asked one guy for directions. He told me what I needed but then asked me to get going before he got in trouble with the guard. That's when I realized it was a prison work crew.

Looks like the apocolypse is closing in. This nasty judge will be confirmed by the two most evil people on earth - moscow Mitch and Weasel Graham.

This means that the election battles will go to SCOTUS and now Dems stand no chance in any of the litigation.

There is only one thing to do - go Nuclear and impeach Bill Barr. Impeachment stops all Senate business. I do not understand why the Dems refuse to do this, it's their only chance.

Been trying to coin a term for the powers-that-be in the USA. Wageslave Power doesn't roll of the tongue like Slave Power once did, but it's probably the most apt.

It's not really slavery. It's closer to the indentured servitude that was in place prior to slavery. Except now, there's no new land to promise to the workers. So what replaces the promise of land? The American Dream, but there's nothing there to really offer either because as George Carlin said, "It's called the American Dream because you have to be asleep to believe it".

Mound, I think the democracy horse left the US barn some years ago, and it's not coming back. The US is an oligarchy rapidly sliding into fascistic governance. If Trump holds onto power, that slide will accelerate. If Biden wins, we'll see a pause until the next Republican administration. For years the Dems have acted like a pawl in a ratchet, ensuring that the Republican dismantling of the New Deal is not undone. I don't see Biden breaking with tradition.

The oligarchs have got their hooks into both parties, and as always they want more for them and less for everyone else. As your update correctly notes, getting Any Coney Barrett onto the Supreme Court is all about cementing the power of wealth. The wealthy don't care how the court rules on abortion. They always have and always will be able to get one. Abortion was always just a sleight of hand to energize and distract the rubes while their pockets are being picked.

Cap, Troy, Ben - My mind turned to this shitstorm of calamities the world is facing these days and how we seem unable to rise to the occasion. That's when I realized that our civilization has endured all manner of catastrophes, natural and man-made, even going to the brink of nuclear war, and we've come through them all. This time, however, is different. This time we're not rallying to defend, much less preserve. This time we're just going through the motions in measured but inadequate steps.

Maybe this is a pre-revolutionary interval. Chris Hedges suggested that. I dismissed it as hyperbole at the time but I'm no longer certain that he's wrong.

I sense that something has to give. Sort of like when the tide goes unnaturally out just before a tsunami hits or once seemingly indestructible buildings toppled by an earthquake. What's the alternative, neo-feudalism?

It will be interesting to see what the Dems do with this situation. I’m not convinced they will do much other than squawk. They will want to give the impression that they are for women’s rights, etc. but will be very leery of actually succeeding in blocking this nomination as their big pocket donors are no doubt all in for the confirmation of this ‘originalist’ judge that will adjudicate in their favour for decades. Mac

It's hard to see what the Senate Dems can do to derail this appointment, Mac. Our friend, Cap, suggests the House could push through articles of impeachment because the Senate would be obliged to conduct the trial before dealing with confirmation but they might pay for such a stunt at the polls in November.

Some hope that, should the Dems hold the House and capture the Senate they could retaliate in some fashion so vindictive it would make the Repugs' eyes bleed but that would only raise the hyperpartisan stakes. What future is there for America if this continues to escalate?