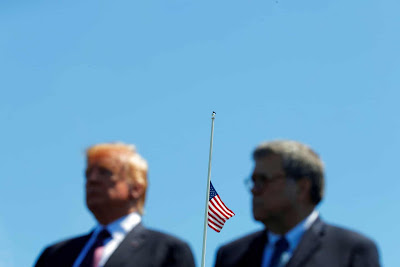 A disturbing article in The Guardian on the perilous state of democracy in America. The article presents the views of the leaders of several major US organizations and they're worried, very worried. They include Vanita Gupta, CEO of the Leadership Conference on Civil and Human Rights; Michael Waldman president of the Brennan Center for Justice; Dierdre Schifeling, founder of Democracy for All 2021 and former head of advocacy for Planned Parenthood; Derrick Johnson, president, NAACP and Sabeel Rahman, president of the thinktank Demos.

There is no way to do this article justice with excerpts. It really does deserve to be read in its entirety and the link above. Here, however, are a few passages.

“Our democracy is deeply imperiled,” said Michael Waldman, president of the Brennan Center for Justice, the go-to authority on all things electoral. “We have relied on democratic norms and expectations for years that now turn out to be very weak in the face of somebody with an authoritarian bent.”

As Waldman, an authority on the subject, put it: “In the US in 2020, widespread claims of voter fraud are not a charge, they are a lie. Voter fraud is vanishing rare, as every study has shown over and over again.”

“A set of actors in the Trump administration and the Republican party have made it very clear that their intention is to hold on to political power at the expense of democratic institutions,” said Sabeel Rahman, president of the thinktank Demos.

“It sounds outlandish to say that in an American election one party would refuse to admit the legitimacy of the result, but that’s very much where we are and all the rhetoric right now is about creating the atmospherics that would enable that kind of power grab on 4 November,” Rahman said.

“Distrust is being stoked and weaponized,” Rahman said, “and a huge chunk of the country has been primed to disbelieve the legitimacy of the result – whatever that result is.”

A few years ago [Schifeling] came to the realization that there was a growing disconnect between the will of the American people and their political representation in federal and state governments.

“I was talking to my colleagues in a range of organizations and we were sharing our frustration at not being able to make progress on our missions,” she said.
They began to compare notes and found their experiences overlapped. In key areas such as access to healthcare, worker rights, combating the climate crisis and policing reform, “We the people” were on the side of progress by a clear majority.

She reached a reluctant and unhappy conclusion: “Our government is not able to represent the will of the people.”

On top of foundational irregularities (i.e. the Electoral College), a slew of dirty tricks has been crafted over the years in the form of voter suppression. The practice is generations old, dating back to the days of southern segregation when African Americans were discouraged and intimidated from voting.

Derrick Johnson, president and CEO of the largest civil rights group in the country, the NAACP, noted that such sleight of hand used to be confined to the deep south but in recent years has metastasized nationwide. “What used to be a regional problem in the south has become a national critical issue. We’ve fought against it since our creation 111 years ago, but there’s been a huge uptick in efforts to misdirect, mislead or outright suppress the right of African Americans to cast a ballot in this election cycle.”

As Johnson indicated, skulduggery and US elections have gone hand in hand long before Trump came along. But in the run-up to this election, voter suppression techniques are being taken to the next level.

“We have not seen this level of intentional overt exclusion since the 50s and 60s,” Johnson said.

“This is a perfect storm in this country,” said Vanita Gupta, who heads the nation’s oldest and largest civil rights coalition. “We can’t take American democracy for granted, as for a long time we did.”

Then Gupta, president and CEO of the Leadership Conference on Civil and Human Rights, used a word not usually associated with America. “Things are happening on our watch that are clear signs of authoritarianism,” she said, “and we have to push back.”

The day when Benjamin Franklin's warning that Americans might not be able to keep their republic is at hand.

I don't know if America can handle another four years of this, Owen. If Trump holds on to power, one way or the other, it will bring considerable conflict. Congressional Republicans are going to have to choose between an emperor or the Constitution but they've proven a cowardly lot.